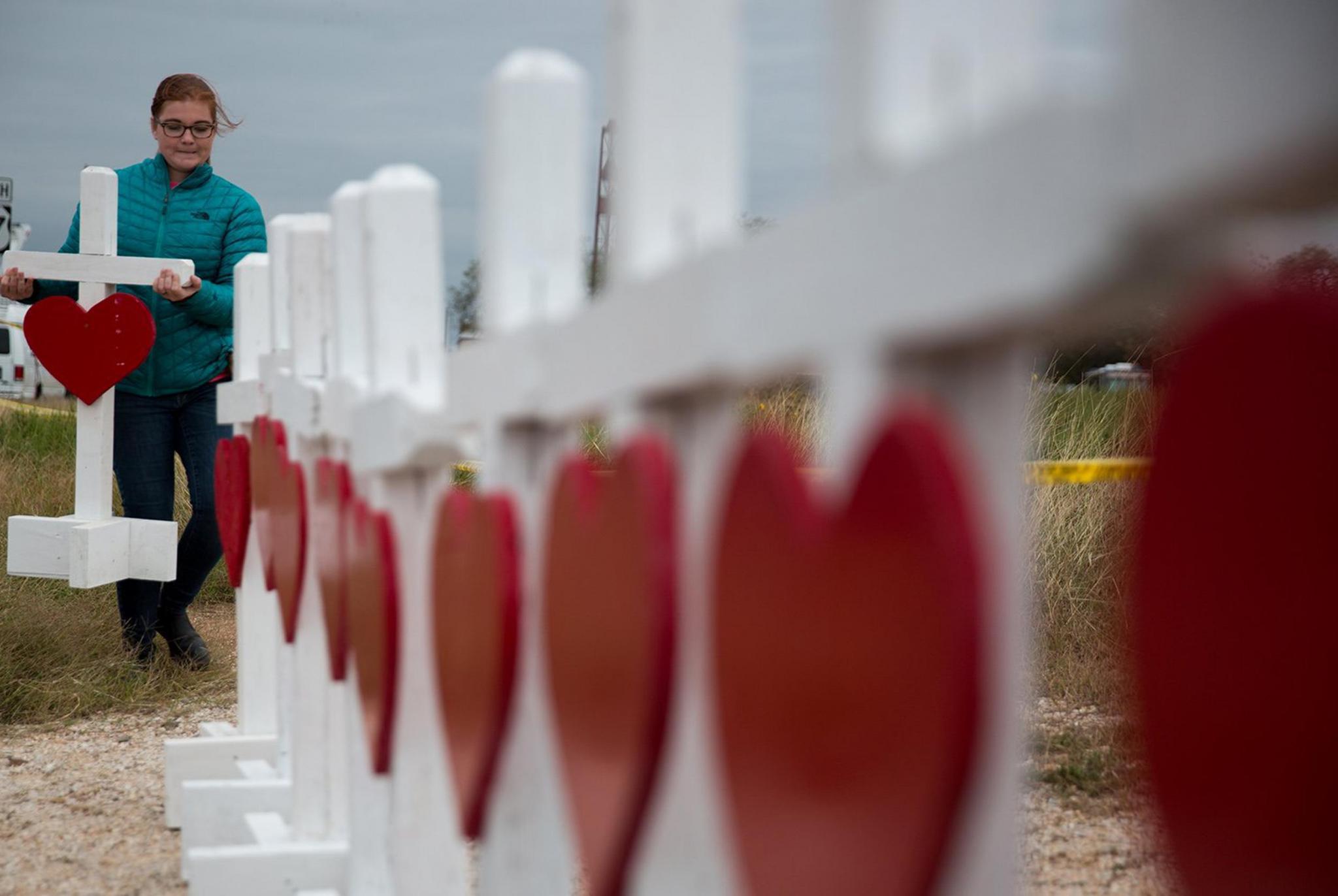 Hannah Krueger added a cross to a memorial near the First Baptist Church in Sutherland Springs on Nov. 8, 2017, three days after a mass shooting there. Credit: Shelby Knowles for The Texas Tribune

A federal judge ruled Tuesday that the federal government was mostly responsible for Texas' deadliest mass shooting at a Sutherland Springs church in 2017, concluding that the U.S. government failed to submit information that could have prevented the gunman from purchasing the assault rifle he used to gun down 26 people.

On Nov. 5, 2017, Devin Kelley, 26, opened fire during a Sunday service at First Baptist Church in Sutherland Springs outside of San Antonio, using a Model 8500 Ruger AR-556, fitted with a 30-round magazine, that he purchased from Academy Sports + Outdoors the previous year. Kelley later died from a self-inflicted gunshot wound after two men chased him as he fled the scene, according to The Dallas Morning News.

He formerly served in the U.S. Air Force at Holloman Air Force Base in New Mexico. In 2012, Kelley was convicted of assaulting his wife and stepson, and in 2014, he was released from the U.S. Air Force on a bad conduct discharge. According to the decision by federal Judge Xavier Rodriguez of the Western District of Texas, Kelley’s likely target was his mother-in-law, Michelle Shields, who was a member of First Baptist Church but wasn’t in the church at the time.

The federal lawsuit, which was consolidated from numerous complaints brought by survivors and families of shooting victims, accused the federal government of negligence, citing the U.S. Air Force’s failure to report Kelley’s assault conviction to the FBI.

Under the federal Brady Handgun Violence Prevention Act, enacted in 1993, federal agencies are required to report people who are prohibited from purchasing firearms for reasons including a domestic violence conviction or dishonorable discharge from the military.

In the ruling, Rodriguez said the conviction should have prevented Kelley from purchasing the weapon he used to attack the church. The Air Force “had an obligation to submit the final disposition report to the FBI within 15 days,” according to the ruling.

However, because it was not reported to the FBI and entered into its databases, Academy was able to proceed with sale of the weapon.

Rodriguez said the U.S. government was 60% responsible for harm caused by the shooting and liable for damages.

“The Court concludes that the Government failed to exercise reasonable care in its undertaking to submit criminal history to the FBI,” Rodriguez wrote in the ruling. “The Government’s failure to exercise reasonable care increased the risk of physical harm to the general public, including Plaintiffs. And its failure ... caused the deaths and injuries of [the victims] at the Sutherland Springs First Baptist Church on November 5, 2017.”

The federal decision follows a recent state ruling from the Texas Supreme Court that essentially shields Academy from being sued for selling Kelley the weapon.

This article originally appeared in The Texas Tribune at https://www.texastribune.org/2021/07/07/texas-sutherland-springs-shooting-court-ruling/.