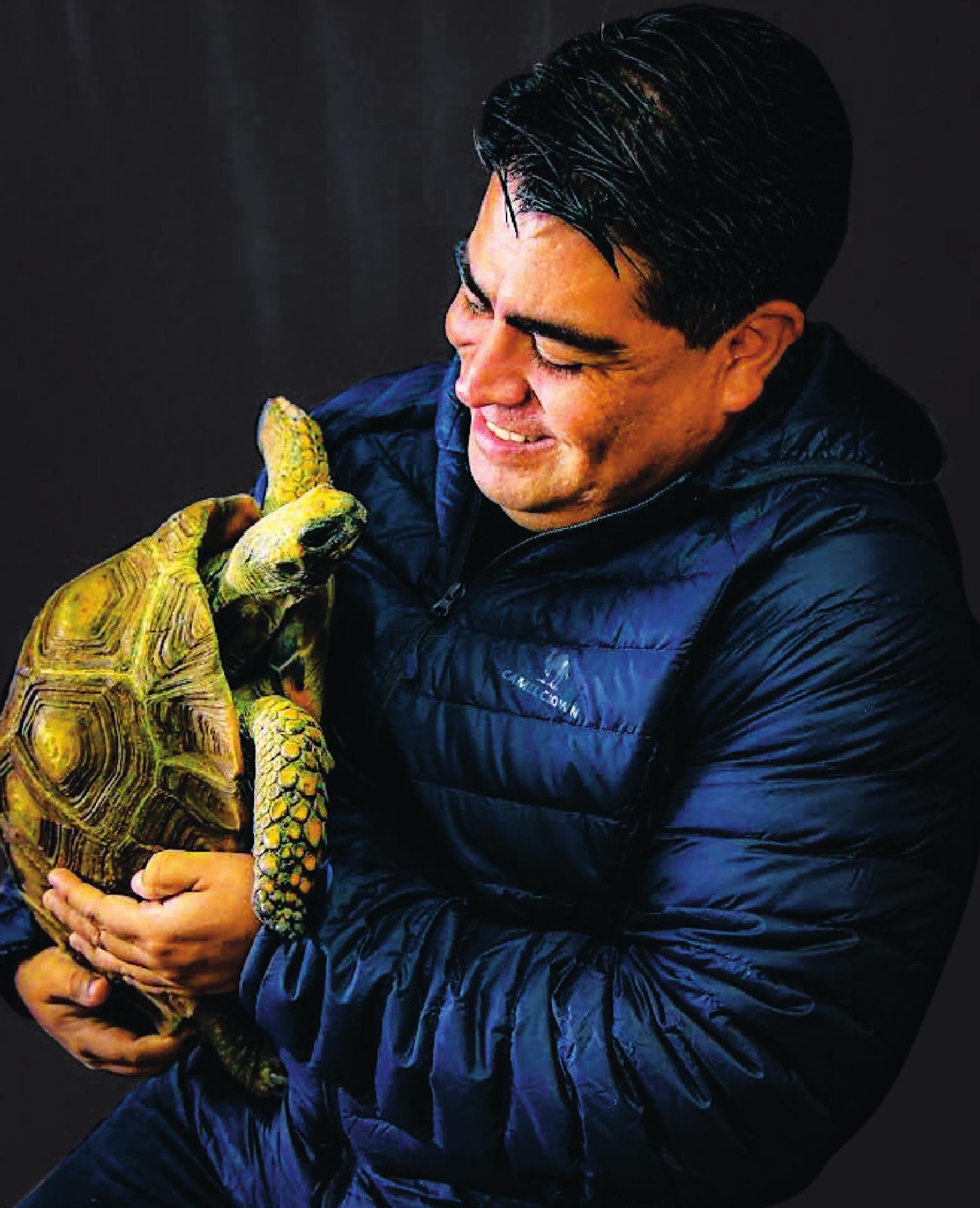 Diego, a South American Tortoise, went missing from his owner Daniel Guerrero — former San Marcos Mayor. Diego and Guerrero were recently reunited after a month-long search. Above, the duo pose together for a photo. Daily Record photo by Lance Winter

It’s a fable, not unlike Aesop’s, involving a tortoise named Diego. But instead of a race against a hare, it was a race against time before Diego may not ever be reunited with his owner, Daniel Guerrero.

On Oct. 26 a happy South American Tortoise, adopted from Central Texas Tortoise Rescue in Wimberley, had a full run of his backyard. Anyone who has met Diego knows at 22-years-old he was feeling a little adventurous, and like a young adult can be a little rebellious, testing the limits of his owner.

“I have a pretty large backyard, I know his favorite spots he’ll go to,” said Guerrero, who served as San Marcos Mayor from 2010- 2016. “One afternoon I came home a little early. I figured well; I'm done with my day let's go see what Diego's up to.”

He checked all the spots. He walked around… he couldn't find him.

As panic ensued Guerrero said he began frantically walking around the neighborhood looking for his land-dwelling reptile.

“At this point I’m just sick. My brother comes over — my parents come over, all eager to help. We go door-to-door looking for Diego,” Guerrero said. “We finally ran into a woman who said, ‘Oh yeah, I saw a tortoise walking down the street at around 2:30 p.m.’ so this is 30 minutes after I got home.”

Guerrero and his team walked all over his Blanco Garden neighborhood until they came to an apartment complex and nearby Dairy Queen where they picked up another clue — and it was not good news.

“We ran into a guy who told us they saw a tortoise and a car stopped and picked it up,” Guerrero said. “That was about 3 p.m. and fits the timeline. By now it was almost 10 p.m. and getting ready to rain.”

Despite the grim news, Guerrero wasn’t going to give up and launched a social media campaign immediately announcing his friend was missing.

“I posted on Facebook and instantly began receiving a lot of comments,” Guerrero said. “Lots of people were on the lookout. Eventually I got this video from this woman who asked if this was my tortoise? It was of a man holding him and carrying him to Thompson's Island.”

The news didn’t help the anxiety Guerrero was feeling. Diego wasn’t a type of turtle that belonged in the water so all he could do was hope for the best and continue his search.

Days and weeks went by, and hope began to dwindle that Guerrero would ever see his beloved Diego again when the unbelievable happened.

It was on day 38 into the disappearance of Diego when Guerrero received a call from Ben Kvanli, local river enthusiast and more notable, an Olympic kayak competitor. While on the river Kvanli spotted something on the shore. Upon closer examination, he discovered the 25-pound Diego trudging through the brush and in good condition.

“Ben sent me a text and said, ‘Hey, are you still looking for your tortoise?’ I said, 'yes,'” Guerrero recalled. “It was about 7 p.m. before we were able to reconnect and sure enough, I received two videos of Diego — I told him I’ll be right over.”

Guerrero said he became a “blubbering mess,” when he saw his friend.

Kvanli found Diego near the State Fish Hatchery, the south side of the river closest to the fish hatchery on Dec. 3.

“He was dehydrated, excited, hyperactive and a bit dirty but healthy and happy to be home,” Guerrero said. “He was happy to be home and celebrated by chasing both dogs all over the house.”

Guerrero said he had received messages of support telling him instances such as his tortoise escape happen more often than he thinks.

“I can’t thank the Kvanli family enough for helping in the search and eventual return of Diego,” Guerrero said. “It meant the world to me.” 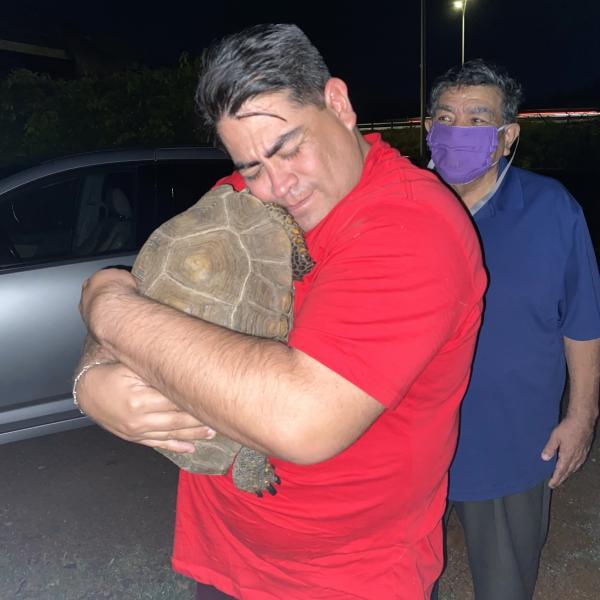 Kvanli said he was happy to reunite Diego with Guerrero.

“I’m just glad Diego is home safe with my neighbor in Blanco Gardens,” Kvanli said. “The cats at my place on the river loved playing around him. Diego is very social and cuddly for a tortoise.”

Diego has been invited to Crockett Elementary later this month to share his story.

The moral of this fable belongs to Guerrero.