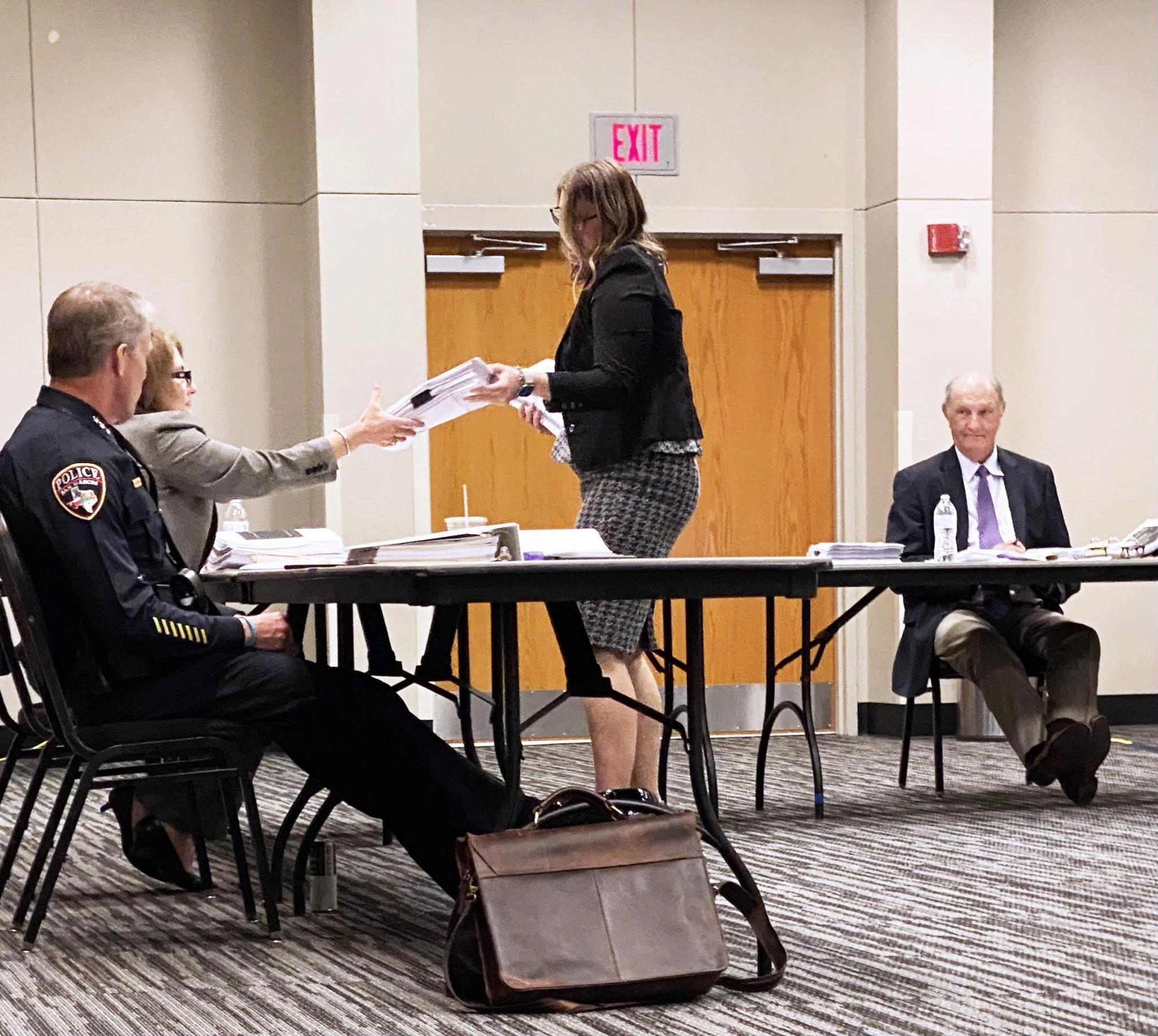 Hartman, who was indefinitely suspended on Jan. 18, 2022, is seeking his job back with back pay and benefits under Chapter 143 of the Texas Local Government Code, which gives police officers and firefighters the ability to appeal their suspensions.

Documents discussed during Monday and Tuesday’s hearing at the San Marcos Activity Center, as well as testimony from several members of the police department, including Chief of Police Stan Standridge and commanders Tiffany Williams and Lee Leonard, showed that Hartman failed to file paperwork in a timely manner.

“It’s epidemic with how he treats the role of a professional police sergeant,” said Standridge, later adding, “[Hartman’s] conduct was in fact a pattern … of insubordination, failing to do the job, failing to do the expectation even after being told.”

Hartman’s lawyer, Alyssa Urban, however, claimed he was the “Pariah of the San Marcos Police Department.” Urban, a staff attorney with Combined Law Enforcement Associations of Texas, said Hartman was fired for negative publicity caused by an off-duty collision where he ran through a stop sign in his personal truck, hitting a Honda Accord on June 10, 2020 in Lockhart, which killed Jennifer Miller and severely injured Pamela Watts.

“You see on June 10, 2020, Sgt. Hartman made the biggest mistake of his entire life,” Urban said. “The collision tragically resulted in the death of the passenger of the vehicle. The investigation into the collision was done by the Lockhart Police Department … and the case was sent to the grand jury in Caldwell County for criminally negligent homicide. Sgt. Hartman was no-billed in November for these actions. According to the [City of San Marcos’] own statements … because Sgt. Hartman was no-billed, his actions that day, although tragic, have amounted to nothing more than a minor traffic violation and thus would not have rendered him to any serious discipline because of the off-duty fatal collision.”

Hartman gave testimony Tuesday, marking his first comments regarding the fatal collision. He said during examination by Urban that he had been diagnosed with depression and post-traumatic stress disorder after the fatal collision. Hartman, who'd been employed with SMPD since 2007, added that he was unable to complete his administrative paperwork in a timely manner because he was losing sleep and lacked focus after the collision.

He also testified that he’d suffered from stress, anxiety and mental health struggles following the crash as well as negative social media attention.

But Hartman said he wasn’t the victim of the crash, accepting responsibility for the collision and saying that the real victims were “Jennifer Miller, Pam Watts and their family and friends.” Hartman added that he had not contacted Watts because of legal proceedings that occurred after the wreck.

Hartman admitted he should’ve completed his paperwork in a timely manner but testified that he believed he was indefinitely suspended because of “pressure from people at City Hall” after the fatal collision.

“I believe they used this to terminate me rather than appropriately disciplining me,” said Hartman, adding that he never expected to be in the situation and still believes that he could do his job as sergeant.

Standridge, who testified prior to Hartman on Tuesday, discussed his investigation into the former sergeant, saying the findings of SMPD’s internal investigation were undisputed.

“The facts are what they are,” Standridge said. “[Hartman] has admitted throughout this investigation he didn’t do any reports.”

Standridge later refuted Hartman’s claims that his failure to complete paperwork was caused by effects of the fatal crash.

“I said, ‘before I make a final decision, I have to look at this holistically,’ and given this, I need to know what do I know about the employee. I said, ‘especially since you provided written and verbal testimony that the reason for these violations is because of mental health’,” Standridge said. “So, I went back and tried to discern because, and this is critical, he paints the picture that all of this is a byproduct, a derivative of his mental health following the fatal crash. Well, if that’s true, all of this misconduct had been manifest after he returned in December of 2020. Guess What? This same conduct appeared in 2017, appeared in 2019, appeared in 2021.”

Standridge testified to several instances from 2017 until Hartman’s indefinite suspension where he was “rude and discourteous” as well as insubordinate.

Standridge also highlighted an incident where Hartman used his taser on a suspect after a high-speed chase in January 2021.

“Instead of being a supervisor on the scene, he responds like an officer does and albeit poorly with poor tactics,” Standridge said, adding that Hartman was suspended without pay for 40 hours after the incident as well as assigned to attend deescalation, minimizing use of force and officer tactical training.

Standridge also refuted that Hartman was fired for the media coverage surrounding him after the fatal crash, while also admitting that SMPD committed a failure by not conducting its own investigation into his off-duty actions.

Julia Gannaway, who was hired by the City of San Marcos for $35,000 to represent SMPD, argued that Hartman should remain indefinitely suspended.

The two-day arbitration hearing wrapped up Tuesday evening. A decision by arbitrator Bill Detwiler whether Hartman should remain indefinitely suspended is expected to be returned no later than July 10.