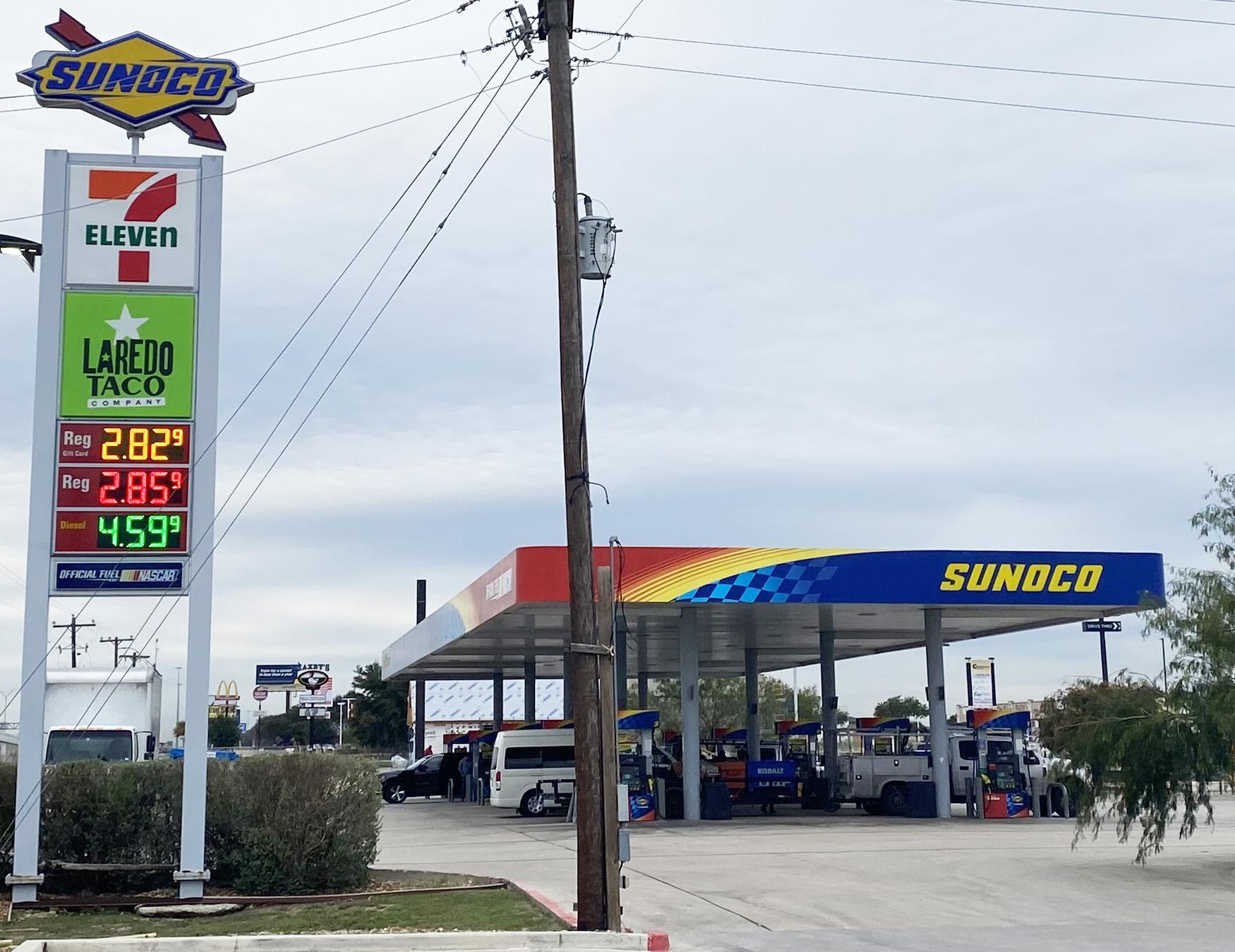 Above, a Sunoco gas station in San Marcos lists regular unleaded gas at $2.82 per gallon on Friday.. Daily Record photo by Nick Castillo

Gas prices continue to fall ahead of Thanksgiving holiday

Gas prices around San Marcos have continued to fall ahead of the Thanksgiving holiday.

Drivers in the San Marcos/Austin area saw an 8-cent decrease in price per gallon at the pump over the last week, according to AAA Texas. Drivers were paying an average of $3.07 per gallon for regular unleaded gasoline as of Thursday, which is down from $3.15 last week. Average gas prices in the area are 8-cents higher than this time last year.

Texas saw an overall 9-cent decrease per gallon of regular unleaded fuel — a fall from $3.16 last week to $3.04 on Thursday, according to AAA Texas. Average gas prices in Texas are $0.03 higher than this time last year. Texans are paying the lowest for gas in the U.S., AAA Texas said.

The decline in gas prices across Texas has been fueled by the global cost for oil, which has decreased from $92 per barrel to $85 over the past few weeks, according to AAA Texas.

“Texas drivers are paying three cents more per gallon, on average, at the pump compared to a year ago,” AAA Texas spokesperson Daniel Armbruster said. “Gas price averages have been dipping lower over the past few days, resulting in Texas having the lowest gas price average of any state across the nation heading into a very busy Thanksgiving travel week.”

“After rising the week prior, the national average has changed directions again, posting a modest weekly decline with prices dropping in a majority of states,” said Patrick De Haan, head of petroleum analysis at GasBuddy. “The decline has been partly driven by Great Lakes states, where prices fell by 15-25 cents per gallon due to an improvement in the refining situation, and also oil prices, which fell back under $90 per barrel last week. With oil prices remaining volatile, the outlook is murky, but I’m hopeful in the lead up to Thanksgiving we’ll see prices declining in more states, while others may not be quite as lucky. Regardless, we’ll still be seeing the most expensive Thanksgiving Day prices on record.”