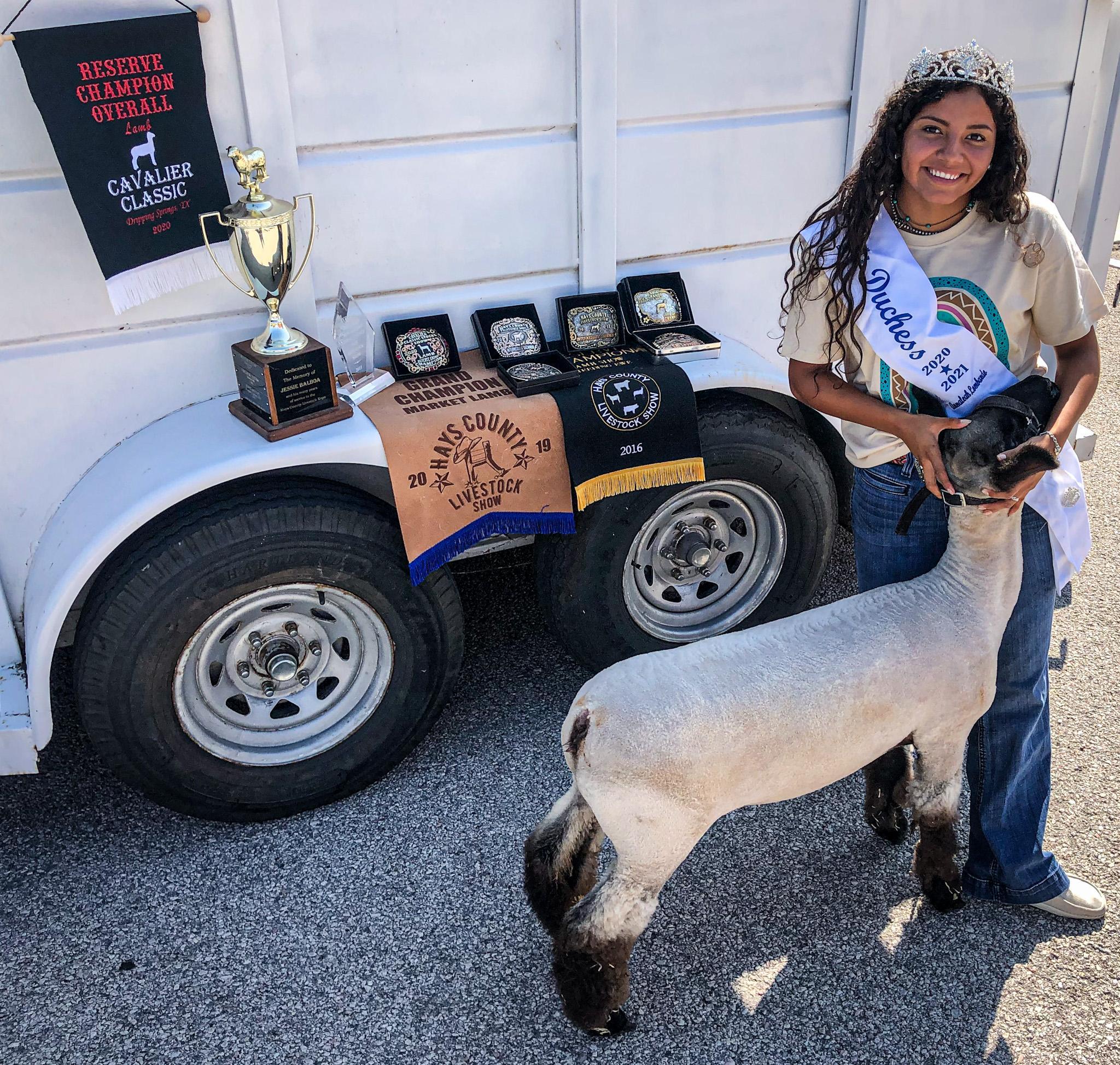 Annaleah Lombardo — an active participant in the San Marcos High School 4-H and FFA programs — will take on some of the state's best as she takes her flock of sheep to be shown at the Great State Fair of Texas this week. Daily Record photo by Lance Winter

A family that shows together, grows together — a sentiment easily said of Annaleah Lombardo and her family. For years they’ve been active participants in the San Marcos High School 4-H and FFA programs. Come this week Lombardo will take on some of the state's best as she takes her flock of sheep to be shown at the Great State Fair of Texas.

Anyone who knows the enthusiastic 17-year-old senior knows she’s a competitor in the truest sense of the word. In fact, she placed third at the fair just three years ago as a freshman and hopes to bring back gold to San Marcos.

“I’ve been going to stock shows since I was an infant. My brother and sister showed before me; so, it’s just been passed down,” she said with a smile on her face.

Her love for showing animals started before she entered third grade, prior to becoming a 4-H club member.

“There’s a competition called Pee Wee. I still have one of my trophies from winning Peewee Showmanship,” Lombardo said. “It’s based not on the lamb, but on you as a little kid and how you show.”

Pee Wee Showmanship, a “Just for Fun” activity, is for youngsters ages 2 to 7, the day of the show. It’s designed to encourage families to come to the fair, give kids the opportunity to participate and win a ribbon, and to allow non-farm families a chance to connect with the animal world.

As she got older, around seventh grade, Lombardo started showing goats but was eventually drawn back to showing lambs.

“They're pretty similar,” she said. “But there’s just something about lambs that I love.”

There appears to almost be a science of knowing when to purchase stock. For Lombardo it begins in March. Once they have what they need she immediately begins becoming the animals' “best friend.”

“They’re scared of you,” she said. “So basically, I become their best friend. Once they settle down, we ease into halter breaking them.”

Lombardo’s overall objective is to make the sale at the fair and she’s feeling confident, particularly with one lamb she affectionately refers to as, “Chad.”

“He’s been halter broken. He can stand for almost an hour where his feet are in line with each other while remaining calm and not moving,” Lombardo said of her entry. “Of course, every now and then he'll get spooked, and I’ll have to calm him.”

“It just makes the lamb look more appealing,” she said. “I also make him work out ... I think he’s ready right now. I’m excited; I think I have a good chance at making the sale which is super hard. There will be around 50 lambs to judge and only three will make the sale.”

Lombardo credits much of her success to her teacher Timothy Sisak who has helped both her and her siblings over the years acquire their livestock.

Lombardo’s other love is for a diamond — baseball diamond that is — and hopes to carry on both her passion for animals by studying to become a veterinarian and playing softball. Of course, the school of choice is the Texas A&M University system.

“I would love to play baseball for [Texas A&M] but if I can’t it’s okay,” she said. I’ll just enroll there. It’s always been my dream to be an Aggie.”

“We are very proud of her for what she is accomplishing,” Odam said. “Her drive and dedication are seen in the countless hours of work she puts into her projects, while maintaining her responsibilities to softball, the veterinary medicine program, and just the basic responsibilities she has as a student. She is really a terrific example of the many ways a Rattler can be successful at San Marcos High School.”