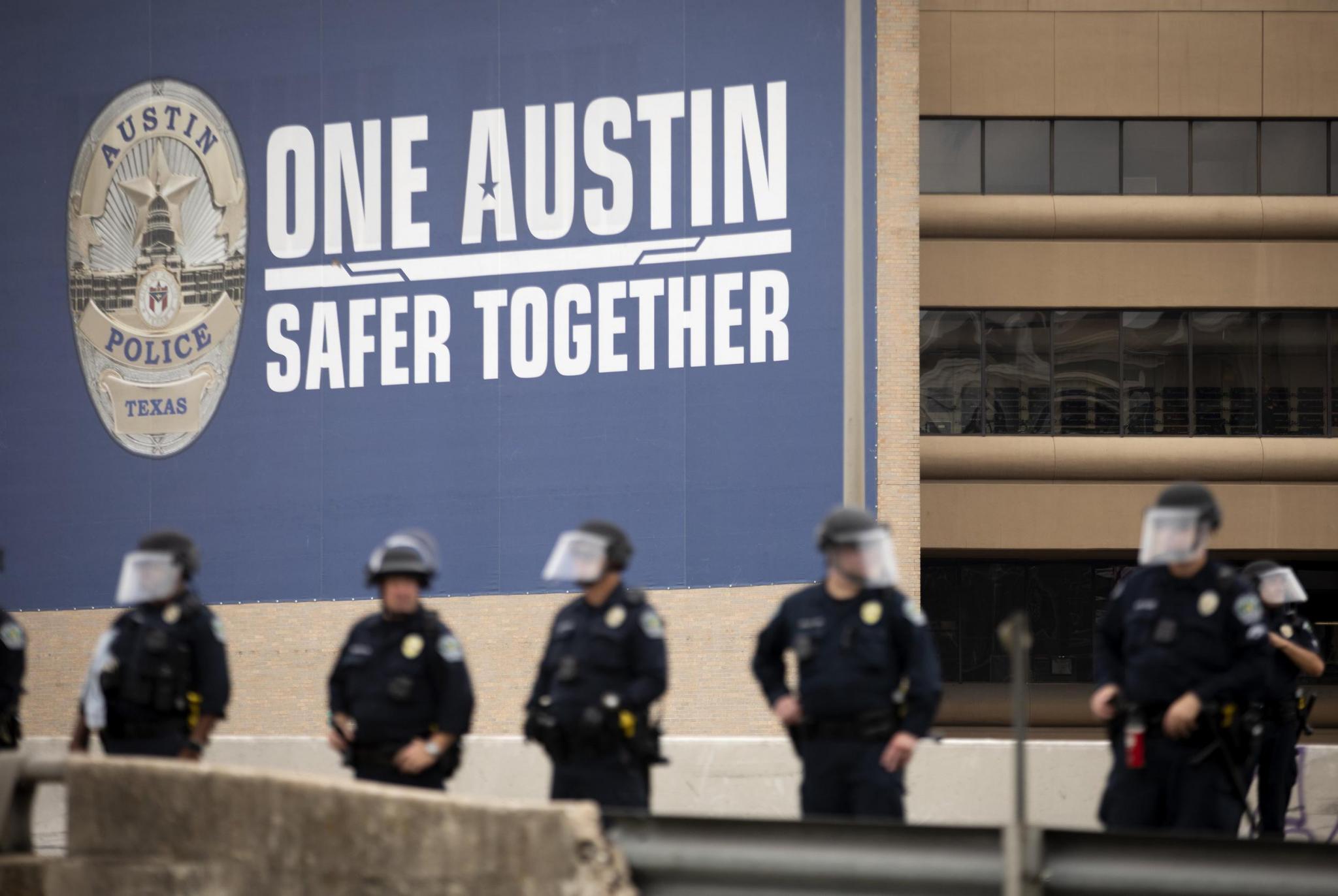 Tue, 09/08/2020 - 8:43am
If passed, the legislative proposal could consolidate Austin's police department under the Texas Department of Public Safety.
JOLIE MCCULLOUGH, THE TEXAS TRIBUNE
Tuesday, September 8, 2020

Gov. Greg Abbott is considering a legislative proposal that, if passed, would put the control of the Austin Police Department under state authority.

Texas’ governor tweeted Thursday that he was looking at a strategy that would stop city officials’ efforts to shift resources away from police departments and into other social services. Austin became the first Texas city to approve cutting its police budget last month as calls rise to “defund police” during a revived movement against police brutality and racial injustice.

“This proposal for the state to takeover the Austin Police Department is one strategy I'm looking at,” Abbott tweeted in response to an article from Reform Austin. “We can't let Austin's defunding & disrespect for law enforcement to endanger the public & invite chaos like in Portland and Seattle.”

The cities have experienced months of sometimes violent protests and controversial intervention of federal agents. In Portland, protesters and counter-protesters clashed after a President Donald Trump rally last month, and a member of a far-right political organization was fatally shot.

The potential legislation, sent last week to Abbott by former Texas House members and parliamentarians Terry Keel and Ron Wilson, would allow for a city with a population over 1 million and less than two police officers per 1,000 residents — a bucket Austin falls into — to have its police force consolidated with the Texas Department of Public Safety. The state’s law enforcement branch would take over the local police department and form a new entity if the governor decided there were “insufficient municipal resources being appropriated for public safety needs,” according to a copy of the letter obtained by The Texas Tribune.

The director of DPS would control operations of the new department, and the state’s Public Safety Commission, a five-member board that oversees DPS and is appointed by the governor, would decide its budget, said Keel, who is also a former Travis County sheriff. The money would then be taken from state sales revenue taxes usually sent to the city.

"That letter basically is a roadmap to how the Legislature can address the problem in Austin," Keel told the Tribune last week. "Because Austin opened the door to the Legislature doing that, by defunding the police and by creating a public safety crisis."

Since the death of George Floyd in Minneapolis sparked protests across the nation, calls for cities to spend less money on policing and more on other social services like health care and housing programs have gained large-scale traction. Floyd was a Black man who died after a white police officer knelt on his neck during an arrest past the point when he lost consciousness.

In Austin, police criticism was heightened in April after an officer shot and killed Mike Ramos, an unarmed Black and Hispanic man who was driving away from police. During protests in May spurred by Ramos' and Floyd's deaths, two nonviolent protesters — a Black man and Hispanic boy — were seriously injured after being hit in the head with police bean bag rounds.

Although calls to remove the police chief went unanswered, the progressive City Council in June issued a vote of no confidence in police leadership to make changes to end police violence against people of color, and, last month, cut the department's budget.

The 2021 Austin budget would immediately cut from the department approximately $20 million that will be redirected to fund areas like violence prevention, food access and abortion access programs. About $130 million was put into two transitional funds that will allow several of the department's traditional duties to remain funded while officials work out which responsibilities to keep under law enforcement and which to move out from under police oversight.

Policing is the most expensive item in most cities’ budgets. Austin, Dallas, Houston and San Antonio budgeted more than one-third of their general funds for police departments during the 2020 fiscal year. Austin, which has now decided to reduce its funding and reorganize its police department, budgeted $444 dollars per resident on police in the 2020 fiscal year, more than any of the four largest cities in Texas. In that city, violent crime rates dropped by 25% between 2008 and 2018. This year through July, there were 29 homicides, compared with 19 during the same period last year, according to the police chief's monthly crime report.

Abbott said in a statement after the budget vote that it paved the way for lawlessness and DPS troopers would stand in to protect the city. Days later, Abbott and other Republican state leaders held a press conference to denounce the decision and promoted a vague proposal to freeze property tax revenues for any city that defunds law enforcement, citing a recent uptick in crime.

Austin City Council member Greg Casar said Thursday that Abbott's latest tweet was another attempt to draw attention away from the state's failed response to the pandemic.

"This, just like the other likely illegal, absurd proposal, are attacks on Austin's local democracy and attacks on our focus on civil rights," he said. "When you look at it, it seems pretty clearly like an attempt at political theater and grandstanding."

An Abbott spokesperson did not respond to repeated requests about the proposed legislation last week.

The proposal for state police to take over a local police department is an action Casar and multiple policing reform advocates said they had never heard of happening before, but DPS is often entangled in city policing. The governor can send troopers into areas deemed in need of support. Last year, when Dallas had a startling number of homicides, Abbott also sent in the state's police force.

Violent crime did drop in the areas of Dallas where they were deployed, but some city officials said they were still doing more harm than good. They said an "overwhelming" number of residents complained that the troopers were over-policing neighborhoods, questioning people about their immigration status and stopping people for soon-to-expire, but still valid, inspection stickers.

Sarah Labowitz, policy and advocacy director for the American Civil Liberties Union of Texas, noted last week that the proposal follows a pattern of state leaders fighting to seize control from local officials, like mask orders during early months of the pandemic.

Correction: A previous version of this story misspelled the name of an employee from the American Civil Liberties Union. It's Sarah Labowitz, not Sara Labowitz.

The original article is located at https://www.texastribune.org/2020/09/03/texas-greg-abbott-austin-police/.