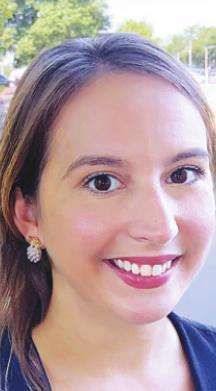 Inacio is one of only 155 economic development professionals in the state of Texas to actively hold the designation, according to the IEDC. “We've hired the best and brightest from across Texas and the U.S. to form an award-winning team of economic development professionals,” said Jason Giulietti, president of GSMP. “This latest distinction is an asset for the region that will translate into more and better jobs for the residents in Hays and Caldwell counties.”

Inacio currently oversees the recruitment of domestic and international companies to the Greater San Marcos region. Her work with GSMP has brought five major relocation/expansion announcements and counting during the 2021 fiscal year, representing tens of millions of capital investment dollars and hundreds of new jobs for the region. Inacio’s work also includes economic development wins such as the 1.1 million square foot Amazon SAT-6 facility, which will be the largest industrial site in Hays and Caldwell counties.

“I’m excited to have successfully completed IEDC’s certification program and am honored to be included among the 1,100-plus CEcDs nationwide,” Inacio said. “I look forward to putting my training to work for the community.”

To receive the designation of CEcD, candidates must pass a rigorous and comprehensive examination, which has three parts and spans two days. The exam tests a practitioner’s knowledge, proficiency and judgment in several key areas of economic development. Inacio is one of 28 individuals nationally who passed the most recently issued CEcD exam.

The Greater San Marcos Partnership is the 501c6 regional economic development organization serving the city of San Marcos and Hays and Caldwell counties, focused on positioning the region for a wider diversity of quality jobs with higher wages. The GSMP mission is to increase economic opportunities for all in the heart of the Texas Innovation Corridor.

The International Economic Development Council (IEDC) is a nonprofit membership organization serving economic developers. With more than 5,000 members, IEDC is the largest organization of its kind. Economic developers promote economic well-being and quality of life for their communities, by creating, retaining and expanding jobs that facilitate growth, enhance wealth and provide a stable tax base. From public to private, rural to urban, and local to international, IEDC’s members are engaged in the full range of economic development experience.