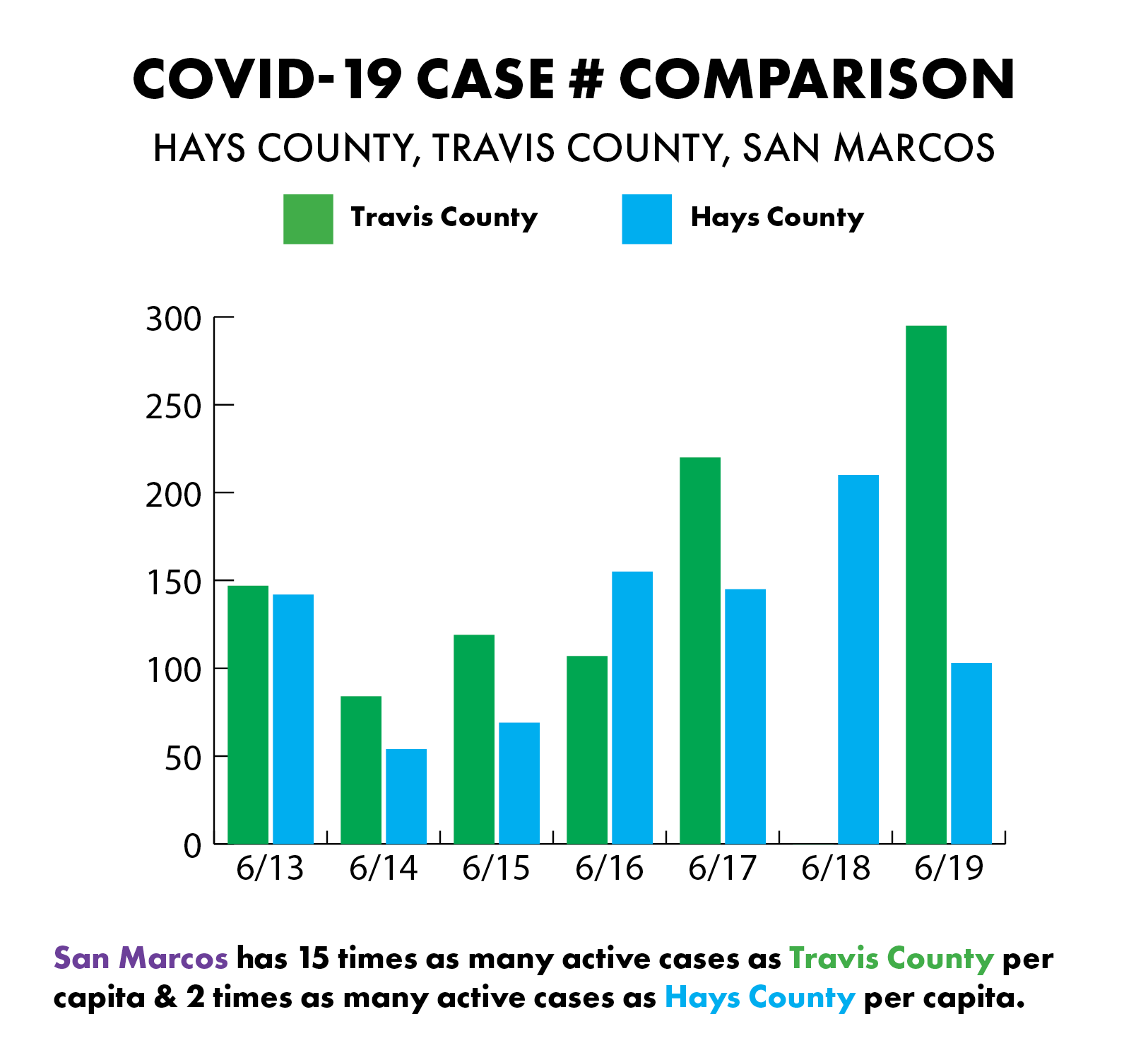 Hays County is more than a week into its second wave of COVID-19 and its new case counts have been rivaling it's much more densely populated neighbor.

Hays County now has more active cases than Travis County as of June 19; 1,157 for Hays, and 1,066 for Travis. Considering that Travis County has a population five times the size of Hays, at 1.27 million compared to 230 thousand, the comparison is even more stark.

Roughly one out of every 200 residents in Hays County currently has the virus.

County Epidemiologist Eric Schneider explained in a press conference that the second wave was a result of protests and floating the river on memorial day, which was roughly 14 days prior to the spike.

With Hays County’s seven- day average of 125 nearing Travis County’s 138 for the first time in months, hospitalization rates may soon reflect the increase.

These case counts are not for lack of testing in either location. There have been 49,672 tests administered in Travis County according to the Texas Department of State Health Services’ most recent calculation on Wednesday and 7,971 in Hays County. This amounts to roughly the same number of tests per capita: three and a half tests for every 100 residents.

Zwiener urged the county to invest in permanent, no appointment necessary and free drive-through testing sites and mobile testing that can visit hot spots, high-risk work sites, and individuals who are unable to leave their homes. She also called for ensuring these sites are accessible to and conveniently located for the county’s large Hispanic population that is disproportionately impacted by COVID-19.

In the midst of the Texas Department of Emergency Management’s (TDEM) five pop-up testing clinics, Emergency Management Coordinator Rachel Ingle shared that the city is in the process of bringing (TDEM) back to Hays County for more testing from July 12 through 15. She is looking into options for more regular testing, acknowledging that results from TDEM sites take a minimum of 10 days to return and be reflected in the case counts.

TDEM has administered 1,665 tests in Hays County from mobile units since April 22 at more than 7 locations, and the county has provided 180 free tests for the underinsured and uninsured at the Live Oak Health Partners Community Clinic.

Despite the outcry from public officials, the county maintains there has been enough testing and no one needing a test has been denied. Schneider said in a press conference, “We really have not had a shortage of places for people to get tested, maybe at the very beginning of this outbreak we might have had some issues but ever since things have begun to ramp up, if somebody needs a test they are not getting turned away. We haven’t had a lack of testing or testing locations. As far as putting together a drive through, we are a small health department with very minimal resources so we’re trying to do the best we can with what we have.”

The city had previously predicted the second wave to happen around August when students and faculty return to school, and now that the second wave has arrived early, they are predicting a third wave in November.

“This wave has only begun. We had our first peak back in late April according to DSHS,”  Ingle said. “We are on the uphill climb still on this one.”

With the disregard for social distancing seen across the city in parks, on the river and in grocery stores as the state has slowly reopened businesses, it's hard for the city to know what to expect and prepare for what is to come.

“I anticipate this wave to last longer than the first because a great deal of social distancing measures are not being practiced,”  Ingle said. “It’s hard to anticipate a scope of the end of this wave and the start of school. The hope is that our community will see the need for wearing face coverings, maintaining (six feet) of distance from others, and avoiding large crowds when possible. If we don’t do this, we will continue to see this massive increase in cases.”