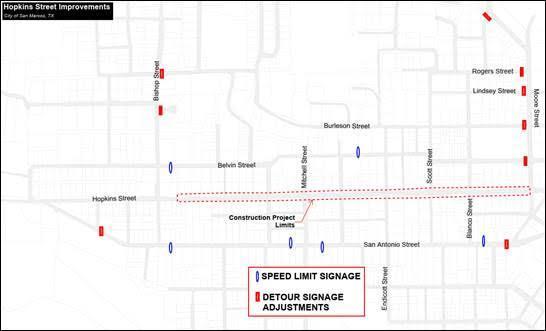 The City of San Marcos has amended its traffic plan in an effort to monitor and improve detoured traffic flow from its Hopkins Street Project.

The city announced its changes Friday, which include temporary speed limit reductions from 30 mph to 25 mph on Belvin and San Antonio streets. The changes also went into effect Friday

According to a news release, the city said it anticipates that the speed reduction will be a permanent change after staff submits the new speed limit to the San Marcos City Council for approval in December.

“The construction on Hopkins Street, has resulted in an increase in thru traffic on San Antonio and Belvin Streets,” said Laurie Moyer, Director of Engineering and Capital Improvements.  “We want the families living, biking, and walking on those streets to feel safe, and reducing the speed of traffic flow is an effective way to do that.”

City crews will replace current Road Closed to Thru Traffic signs along Bishop and Moore streets with detour signs directing traffic to stay on the detour route. The city added that it aims to put signs  in locations that won’t impact access to local residents and businesses.

The Hopkins Street Project began this summer and is expected to be completed by Summer 2022. The project, which is estimated to cost the city $10 million, will replace water and wastewater lines on Hopkins from Bishop to Moore streets. The project also includes a traffic “calming design” with reduced roadway sections and three raised intersections. Storm inlets will also be installed, which will tie into the Travis Drainage Outfall Project.