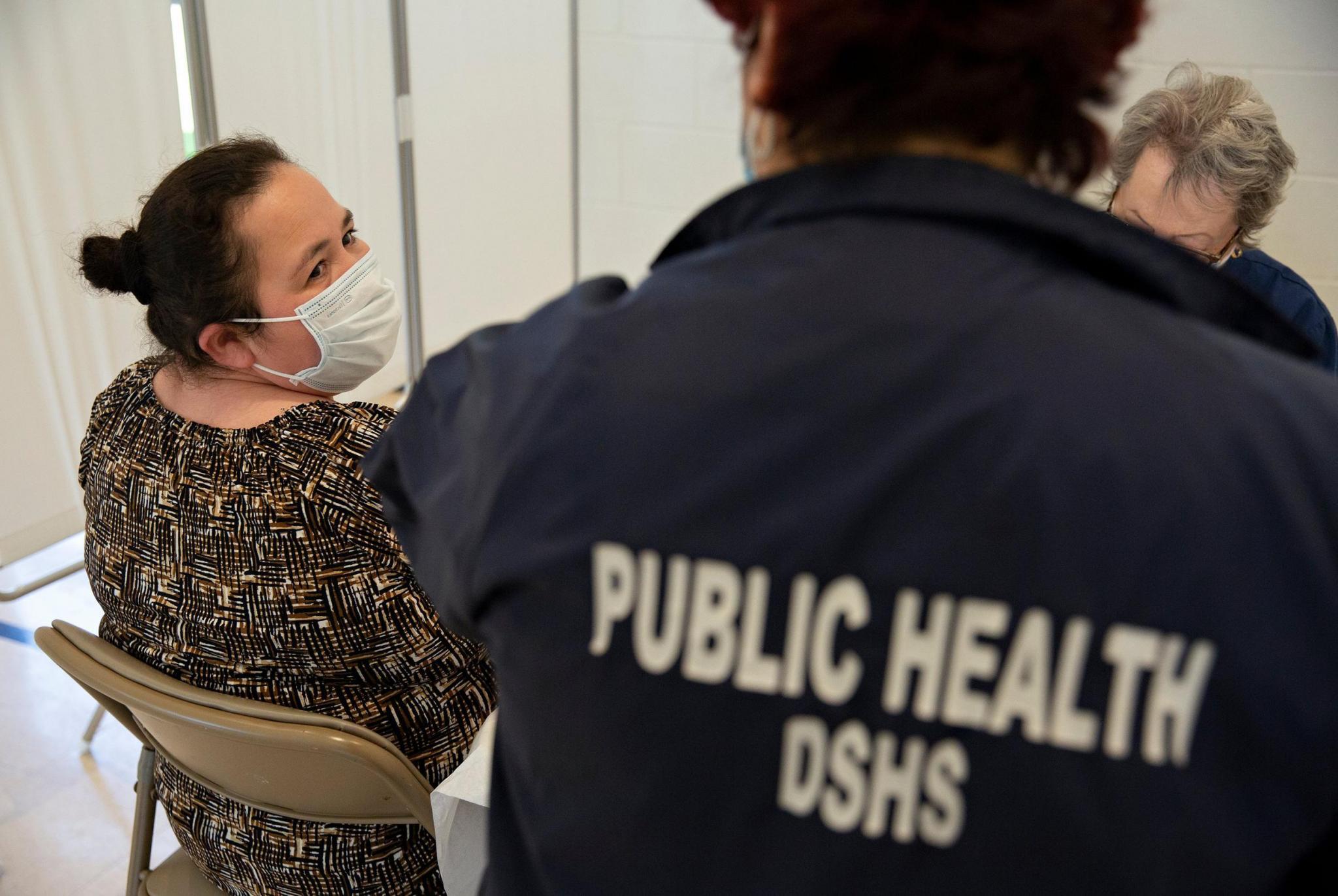 Wed, 05/12/2021 - 11:57am
Mount Pleasant in northeast Texas lags behind the state in its vaccination rate, but the town is boosting its numbers by mobilizing churches, nonprofits and other trusted community leaders to help overcome residents’ fears and doubts.
@TexasTribune
KAREN BROOKS HARPER | The Texas Tribune
Wednesday, May 12, 2021

The 41-year-old mother of three had not gotten a COVID-19 vaccine because she feared side effects would keep her from working at a local supermarket and taking care of her kids.

But her husband and her pastor had both challenged her over the past 12 hours to get the shot.

“I know our people are stubborn,” she recalled Pastor Jose Sanchez saying at a Spanish-language church service the night before, eliciting chuckles from the congregation, almost all of whom had contracted COVID-19 over the past year. “Don’t be afraid. Please, go get vaccinated.”

Her husband, who himself had been shamed by his coworkers into getting vaccinated, shook his head at her over breakfast as she tried to decide.

Orellana snatched her keys off the table and headed out to prove him wrong.

At the vaccination clinic inside the bright white fellowship hall at Tennison Memorial United Methodist Church in downtown Mount Pleasant, Orellana felt her doubts melt away.

“I felt peaceful. That’s how I knew I made the right decision,” Orellana, who immigrated to the U.S. from Honduras more than 20 years ago, said in Spanish moments after getting her vaccine.

It was exactly the outcome that health officials wanted for people like Orellana, whose hesitancy — and the manner in which she was ultimately convinced — illustrate the challenges faced across Texas in the long, slow haul to get most of the state’s 29 million residents vaccinated.

At both the state and national levels, the initial rush for the vaccine — with its hourslong lines and monthslong waiting lists — is over. The task now is vaccinating Texans who weren’t eager or able to show up in the first wave.

In Mount Pleasant, a northeast Texas town of 16,000 about two hours east of Dallas, methods like mass vaccination sites that have inched other parts of the state toward herd immunity haven’t been available, and Titus and its surrounding counties lag far behind the rest of the state in the percentage of vaccinated residents. Only 34% of eligible residents in the area have gotten at least one dose — compared to 51% statewide.

Residents relied mostly on chain pharmacies, occasional vaccine events and hubs in Tyler, about an hour and a half away, to distribute doses in the early days of the rollout. But the effort here has shifted to something more tailored to this churchgoing, blue-collar community where the number of churches per capita is above the state average and where some of the nation’s largest meat-processing and trailer-manufacturing plants dominate the economy and the community’s daily life.

The push appears to be working, according to state numbers.

As the state sees declining numbers of new vaccine recipients each week, the rate in Mount Pleasant has jumped since local efforts have begun to include walk-in vaccination clinics, church events and word-of-mouth campaigns.

“If you look at the same data from six weeks ago, Titus County was way below the region’s average, and now we’re equivalent,” said Titus Regional Medical Center CEO Terry Scoggin, who runs daily walk-in clinics at the hospital and has been involved in other local vaccination efforts. “We’ve really made some efforts in the last four weeks to increase our numbers and get it up there. But we’re still far below the state.”

Mistrust of government leads to hesitancy

Boosting the vaccination rate is a particular challenge in rural, conservative communities like Titus County, which at one point last summer had one of the highest per capita COVID-19 infection rates in the state, Scoggin said.

One reason is vaccine supply, which has only recently started to become more plentiful, Scoggin said. Other parts of the state received larger shipments early on, and northeast Texas is just now catching up, he said.

Another reason is fear. Roughly 40% of Titus County’s residents are Hispanic, many of them immigrants drawn here by job opportunities at the county’s largest employer, the Pilgrim’s Pride poultry processing plant, said Dr. Sharon Huff, northeast regional medical director for the Texas Department of State Health Services in Tyler.

Many are undocumented, and a large immigration raid 13 years ago, followed by several smaller ones since then, still fosters mistrust in things like government-sponsored vaccine clinics, several residents told the Tribune.

Local resident Blanca Hardwick says that when she went to a clinic for her first shot last month, her family told her: “You have all the papers, so you go first and tell us what they’re asking for.”

The state does not require proof of citizenship for vaccines, but that is neither widely known nor widely believed among the immigrant population, Huff said.

And that’s where the local voices are so important in tipping the scales for residents who are on the fence, which Huff said describes a large portion of the people of color in the community.

“The government saying it is not necessarily the best voice to say it because there is already a little bit of distrust of the government to begin with,” Huff said. “But when you have their own community, their pastor, when the groups are talking about it on their social media, from their perspective that’s a more reliable source that they can trust.”

Titus County, where 71% of voters went Republican in the 2020 presidential election, also is home to a large population of white religious conservatives, the least likely group to get vaccinated.

But local officials said they are focusing their efforts on communities of color right now for several reasons.

White citizens were more likely to show up in the early stages of the vaccine distribution, so most who wanted the shot have already gotten it, Huff said. And while many Hispanic and Black residents are still undecided, more white residents who haven’t gotten the shot have already made up their minds not to do it and therefore are more difficult to convince, she said.

A few weeks ago, state and local health officials met with local pastors to ask for help. The white evangelical churches they approached were not interested in passing along encouragement about the vaccine, Huff said, but several others took up the message.

“Health care decisions are personal, and they should be made on a personal level,” said Sanchez, pastor at Iglesia Tabernáculo de las Buenas Nuevas, where Orellana heard his message. “You can’t make those decisions for people. But sometimes they just need a little bit of moral support.”

A small band of volunteers for Northeast Texas Unidos, a three-year-old nonprofit that caters to the human services needs of local Hispanics, were catapulted into the coronavirus battle last year when officials leaned on them to get pandemic information out to the Spanish-speaking community, said the group’s president, Abilene Aguilar.

Then a couple of months ago, they were called upon again to spread word about vaccines.

The group put out the message on social media, spoke on a local Spanish-language radio station and in a podcast, partnered with Huff’s office to create one of the clinics at Tennison Memorial United Methodist Church, worked with faith leaders and distributed flyers at some local Hispanic businesses.

“We get calls and questions all the time,” Aguilar said. “There are still people who don’t know where to get the vaccine or what it is. If they don’t hear it in church or on the radio, they don’t know what’s going on.”

One of the most successful efforts in Mount Pleasant was vaccinating a couple thousand workers on-site at large local employers, which eliminated workers’ worries about getting time off or other issues, Scoggin said.

And two clinics at Tennison, which has hosted health fairs in the past and is well known as a “safe place,” drew in hundreds of locals, Huff said.

Francisco Garcia said his odd work hours at a dairy farm made it impossible for him to book an appointment. Then a friend told him about the walk-in vaccine clinics at Tennison, he said, and he came in during his lunch break on a recent Friday.

“It was easier to do it without appointments, and I liked that it was supported by the church,” the 46-year-old said after getting the shot.

To help people like Garcia and Orellana, state health officials brought staffers to the clinic with family ties to Mexico, Honduras and Puerto Rico, so people from those regions would feel more comfortable hearing their own dialects, Huff said.

They also held clinics on Fridays, which Huff said allayed fears that possible side effects would keep people from working on a weekday.

Huff also had vaccines from all three major manufacturers — Pfizer, Moderna and Johnson & Johnson — on-site so recipients could choose their shot.

Mandi Cai contributed to this article.

This article originally appeared in The Texas Tribune at https://www.texastribune.org/2021/05/12/texas-covid-19-vaccines/.