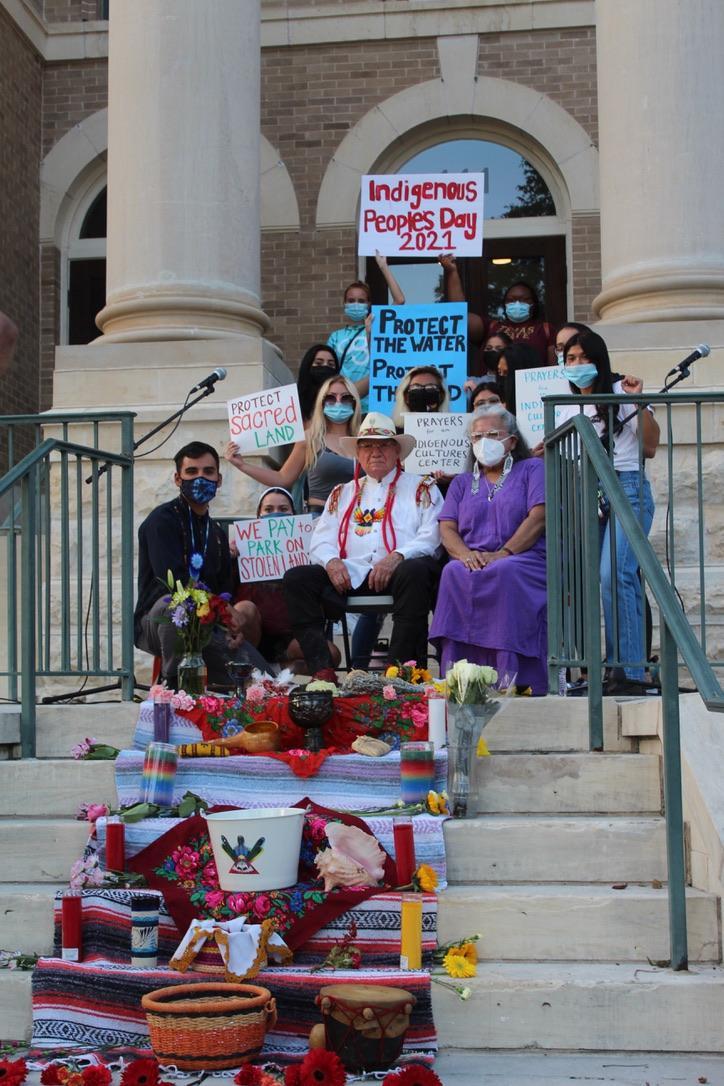 Above, Texas State University students gather with their signs of support for the cultural center behind Dr. Mario Garza, ICI's board of elders chair, and Maria Rocha, ICI's executive director. Below, Emily Aguilar explains the importance of community engagement with the Indigenous Cultures Center to a crowd of ICI representatives, local students, community members and members of the press. Photos by Madi Telschow/San Marcos Publishing

The announcement took place at a press conference and prayer rally on the steps of the county courthouse in San Marcos. Representatives from ICI and supporting students from Texas State University provided information and sought community input for the center, also including rituals of prayer and song from local tribal culture.

“Before we do anything, we need the community to tell us what they want in an Indigenous Cultures Center,” said Dr. Mario Garza, the institute’s board of elders chair. “It’s our way that the people speak first, and then the elders take action.” 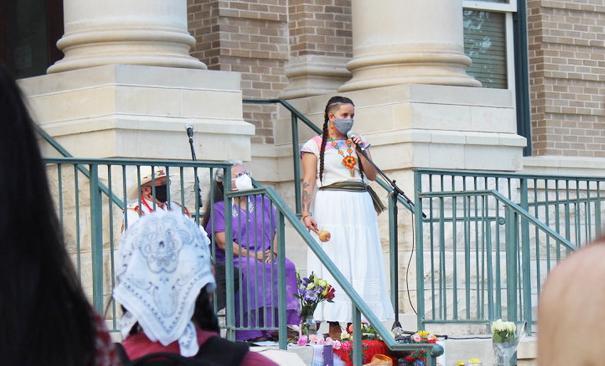 All in attendance were encouraged to take a slip of paper, write what they would like to see in a center for indigenous culture and drop it in a basket for ICI to consider.

Executive Director Maria Rocha emphasized the importance of all community members participating in this gathering of feedback — whether at the event or by visiting ICI’s website.

“Starting today, we’re launching a campaign to hear your prayers for the center, and today, we hope that you’ll join us in this first step forward,” Rocha said.

The center is not just for Indigenous people, explained Emily Aguilar, who is coordinating the center’s building process.

“Our dream is that this center becomes a space for all of our community — both our indigenous and non-Native community — to come together to learn about, with and alongside us,” Aguilar said.

ICI aims to place 10 acres into public protection for continued stewardship, including a public facility for art exhibits, performances and educational activities, according to a recent press release.

“It can sometimes be hard for us, as Indigenous people, to keep track of our family heritage,” said Gina Alba-Rogers, chair of the Council for the Indigenous and Tejano Community in Hays County. “We use paintings and storytelling to pass down our stories to the younger generations, but it’s often seen as folklore. It’s not folklore. We need a place where these stories, and our culture, can be preserved and recognized.”

Because so many of these stories have been lost, it’s often difficult for Indigenous people to know they are, in fact, indigenous, Alba-Rogers said.

“The census reports often reflect that if you’re Hispanic, you’re a subcategory of ‘white,’” Alba-Rogers explained. “But the truth is, most Hispanic people whose families have been living in this area for decades upon decades are, in fact, Indigenous. A lot of what is often considered ‘Mexican’ is, in fact, Indigenous.”

Consequently, the institute plans to serve the Hispanic and Latinx communities in the area as well.

These efforts would fall in line with the recently discussed Mexican American and Indigenous Heritage and Cultural District the City of San Marcos plans to create in the primarily Hispanic neighborhoods. The center will likely be situated north of the heritage and cultural district. 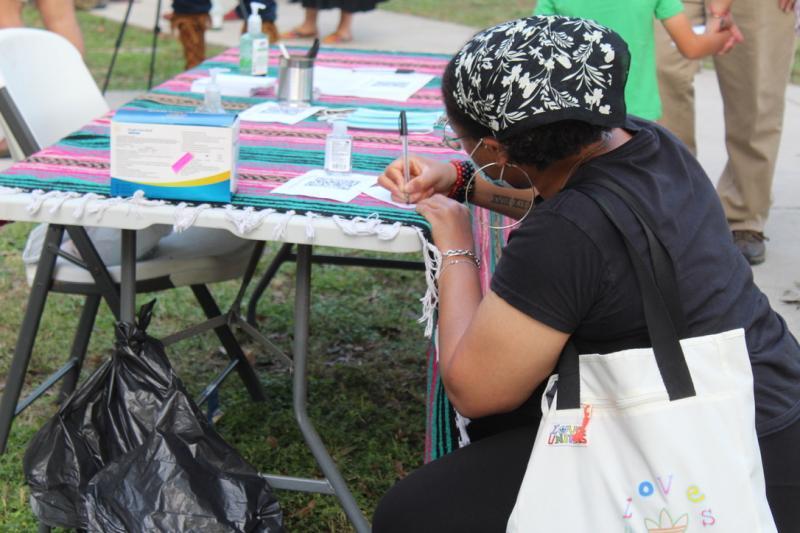 Above, A local community member writes down her prayers for the Indigenous Cultures Center. Photos by Madi Telschow/San Marcos Publishing

The institute is currently in talks with the City of San Marcos and Hays County. While the San Marcos City Council agreed to explore the possibility of providing city property for the center, the institute is still waiting to hear back from the Hays County Commissioners Court regarding their application for bond funding.