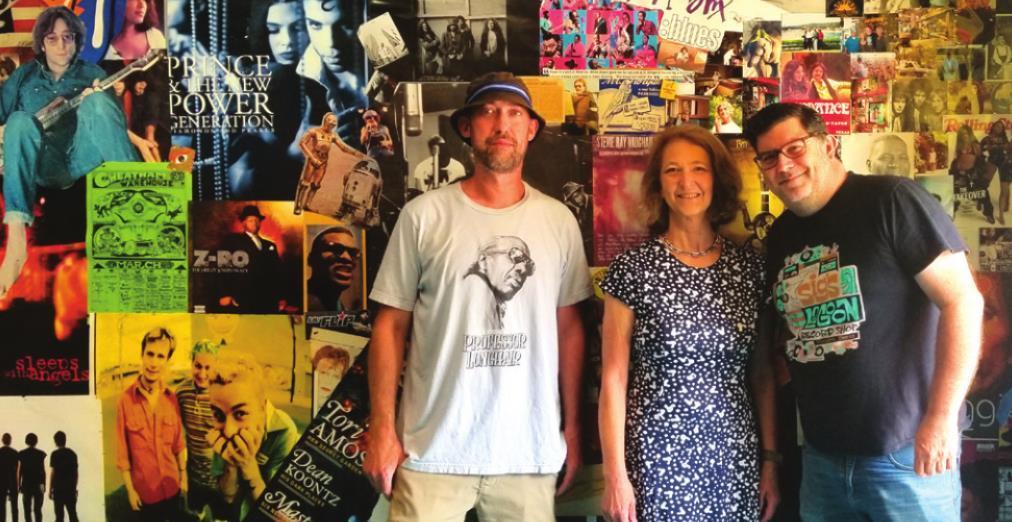 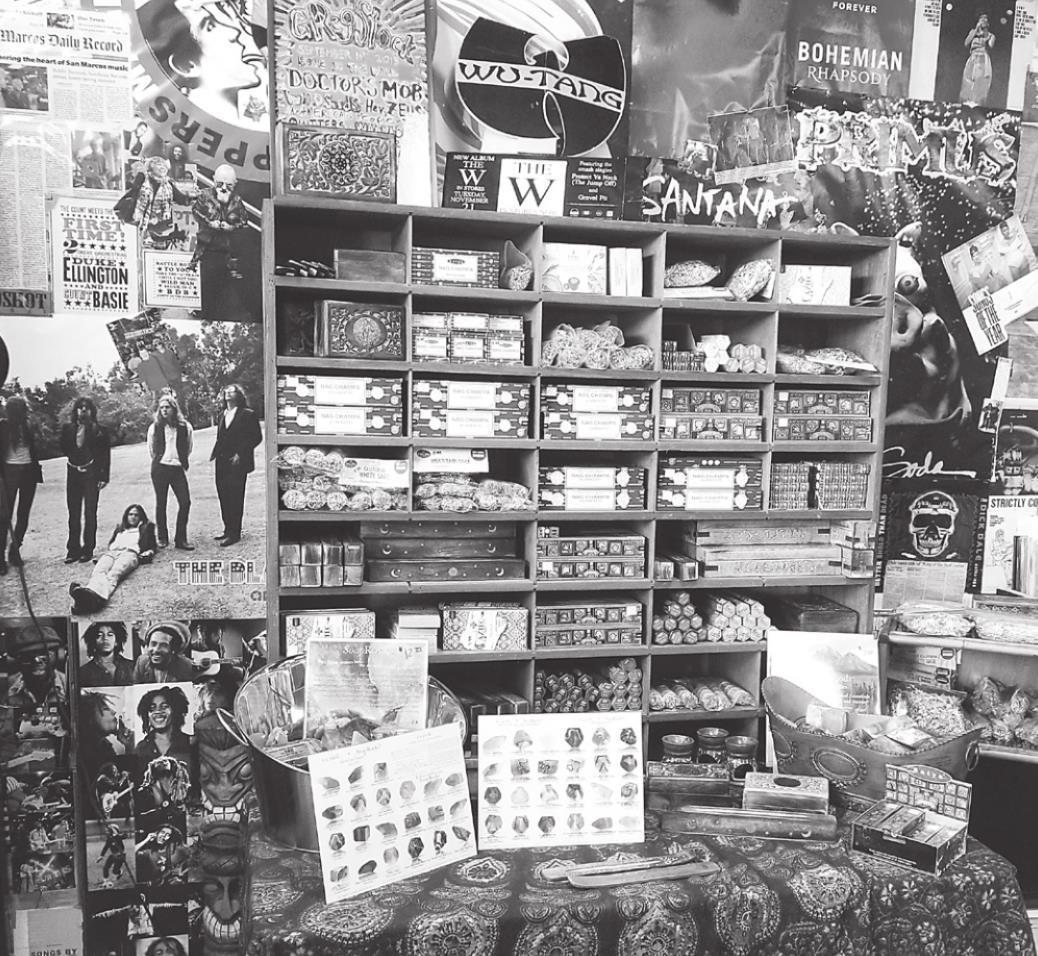 “When people are walking in now, they smell this incense and look at the walls and they’re like, “This is it!’” Nancy Barnard said. Daily Record photo by Celeste Hollister

It’s back: The rebirth of Sundance Records

San Marcos lost an icon last August when Bobby Barnard, the legendary owner of Sundance Records, died unexpectedly. Since Barnard and his wife, Nancy, opened the store in September 1977, it had been a much-loved staple to generations of San Marcans.

Though the Barnards officially retired Sundance in 2012, the news of Bobby’s passing sparked the embers of nostalgia that would slowly grow into the record store’s rebirth.

Thomas Escalante, who owns Sig’s Lagoon, a record store in Houston, got his start in the business under Barnard’s wing back in the early 90s. When Barnard closed up shop in 2012, he divided most of his inventory between Escalante’s shop in Houston and Groover’s Paradise, an Austin record store owned by another former Sundance employee, Greg Ellis. What didn’t wind up in those stores went into storage.

“Fast forward to this year when I was helping his (Bobby’s) wife Nancy move back to San Marcos, she was needing to sell off a lot of stuff she had, to downsize,” Escalante said. “They had a lot of stuff.”

Parker Wright, another former Sundance employee, came on board to help out.

“When Nancy called me, it was just to sell a few posters,” Wright explained. “That’s when the pop-up happened.”

The Sundance Pop-Up was held at Zelicks on March 11, and ignited the first rumors of Sundance’s return, though at the time, it was not something Escalante had considered.

“It kinda went viral,” Escalante said. “That was not a thing we had planned on doing. I was getting calls from all over. Nancy was blown away about the amount of people thinking this was happening. It warmed her heart and mine as well.”

After the pop-up, Escalante and his wife, Jennifer, had planned on returning to Houston. But the pop-up had stirred up Nancy Barnard’s interest as well.

“Nancy said, ‘we should just look and see if there’s a place to rent, just for the fun of it,’” Escalante said. They happened to find a fitting location at 241 N. LBJ, not far from where the original Sundance Records stood. They even managed to get a phone number one digit off from the original. “Not long after that, I signed a lease and we were on our way. It wasn’t planned, but it worked out. It all fell into place.”

“It was like magic,” Nancy Barnard said. “I’m calling this the Sundance reincarnation. Bobby’s gone, but not forgotten. He’s here in spirit, in the walls.”

Like many San Marcans, Wright’s experience with Sundance Records began when he was a child. He first started visiting Sundance in the fourth grade when his Mom, Ann-Jeanette Patton, would drop him off at Diversions Game Room on the Square. Patton, a guidance counselor at San Marcos High School, also worked “up the hill” at St. Mark’s Episcopal Church as a pastoral assistant. From there, he would take what would become a familiar route, spending his evening in Sundance and getting a snack around the corner at Alvin Ord’s. In fifth grade, Wright got into vinyls, singles and 45s. Sundance, and Bobby Barnard in particular, fostered that interest. Later, Wright snagged the most coveted job in San Marcos by working at Sundance.

“Every kid asked for a job here,” Wright said. “It was the place to work.”

Wright’s dedication to Sundance might be summed up completely by the fact that when asked for an interview, he made sure to schedule before opening time so that he could be fully devoted to customers once they arrived.

And they have been arriving. Since the store’s soft opening June 1, Sundance has already seen over 1,000 customers. “All our expectations were blown out of the water,” Wright said. “The outpouring of love and support has been amazing.”

“It’s a multi-generational thing,” Nancy Barnard added. “It’s wonderful to feel that. The memories it brings back are all good.”

Nancy said that the one guiding principle in reopening the store has been, WWBD: What Would Bobby Do? In life, Bobby had been very deliberate in the way he arranged the posters, memorabilia and clippings on the walls. Escalante, Wright and Barnard endeavor to continue his vision.

“He cut out things from the newspapers to add to the walls,” she said. “It’s all related. It is a time capsule in here. As the store expands, we always have a treasure chest to pull from. It’s a vinyl people’s candy store. I think Bobby would be very happy.”

Wright said at the moment, Sundance is at about 80% complete, with new items and posters being added by the day. In addition to vinyl records, band posters, t-shirts, incense and tiki mugs — items that had always been present in the original Sundance — they have added turntables to their inventory, and hope to someday include guitar strings and a selection of instruments for local musicians.

“When people are walking in now, they smell this incense and look at the walls and they’re like, “This is it!’” Nancy Barnard said. “The store is off to a fabulous start.”

Nancy Barnard, Escalante and Wright hope to have a grand opening the weekend of August 6, one year to the date of Bobby’s passing, with the celebration starting on Saturday, August 7. Because of the pandemic, they weren’t able to hold a proper memorial, but in this way they will be able to honor his legacy.

“The best way to celebrate is to reopen the store,” Escalante said. “Bobby handed the baton to me, now I’m bringing it back.”

With its return, Sundance is already fostering the next generation of discerning music lovers in San Marcos. The store boasts its first ever legacy employee — the daughter of a former employee started working there this summer. Additionally, word on the street seems to spread fast in town as Texas State students are already sharing the news of the store’s return.

As Wright said, “We’ve had people walk up the hill and get stopped by kids who are like, ‘Where’d you get that?’” Which is exactly how Sundance became a San Marcos musical institution in the first place.

The team of Escalante, Nancy Barnard and Wright are devoted in continuing Bobby Barnard’s efforts to bring joy and enlightenment to the musicians and music lovers of San Marcos and surrounding towns.

“We just want to pick up where the store left off,” Escalante said. “We’ll be expanding some of the stuff from my store in Houston — a lot of gift items, anything tied to music. Parker did an outstanding job putting up posters the way Bobby did, to recreate the vibe. We’re very excited to be where we are.”