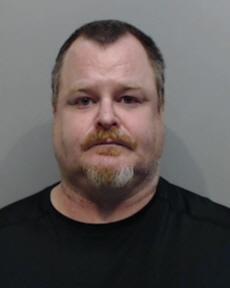 Just 10 ½ hours from the time Brandon Fontenette met Mark Stevens and his wife, Hays County law enforcement officials declared Fontenette dead following what was described as a menage a trois at the couple's home in Buda in 2018.

It took jurors little time Tuesday before returning two guilty verdicts against Stevens following closing arguments. One for first-degree murder and the other for tampering with evidence. Testimony showed Stevens strangled Fontenette, shot him 13 times with an airsoft BB style pistol and stabbed in the back and into his lung, killing him.

Hays County prosecutors Michael McCarthy and Nicole Evans were determined to ensure jurors knew Fontenette, 36, was invited into the Stevens’ home and didn't deserve to die.

“The cover up proves the crime,” Evans said. “Let's talk about why none of [Stevens'] actions were reasonable. Brandon did not unlawfully, or forcibly enter the defendants house. We know they invited him over to engage in sexual conduct with [Stevens] and his wife.”

During that time Stevens made a call to his brother to ask if he would help cover up what he had done.

“You don’t need to cover up anything if you didn’t do anything wrong,” McCarthy said. “If this were legitimate self defense you wouldn’t need to dispose of the body. You call 911 immediately.”

McCarthy said it was easy to determine Stevens had anger issues showing pictures of holes and patches in the drywall of their home to the jury.

“He has anger problems. He snaps and starts smashing things,” McCarthy said. “But we also know he’s jealous. Jealousy plus anger issues ... it’s a story as old as time. How can you claim self defense when you stab someone in the back.”

The prosecution showed bodycam video again of Stevens being questioned, appearing confused and bewildered. It also showed him placing his own personal handcuffs on himself for law enforcement.

“Literally, the first thing he does when confronted with law enforcement is put himself in handcuffs because he knows what he did was wrong,” McCarthy said. “That is what this video tells you — that is a guilty conscience.”

Another shocking moment came when the prosecution played the audio of a phone conversation between Stevens and his brother.

“Have you ever seen the television series, Dexter,” Stevens asked. “I need your help. That’s in my bathroom, I’m not kidding. Yeah —  it’s that.”

McCarthy asked jurors to think about how depraved someone has to be for their first instinct, after stabbing someone to death, is to call your brother for help — chopping up and disposing of the body.