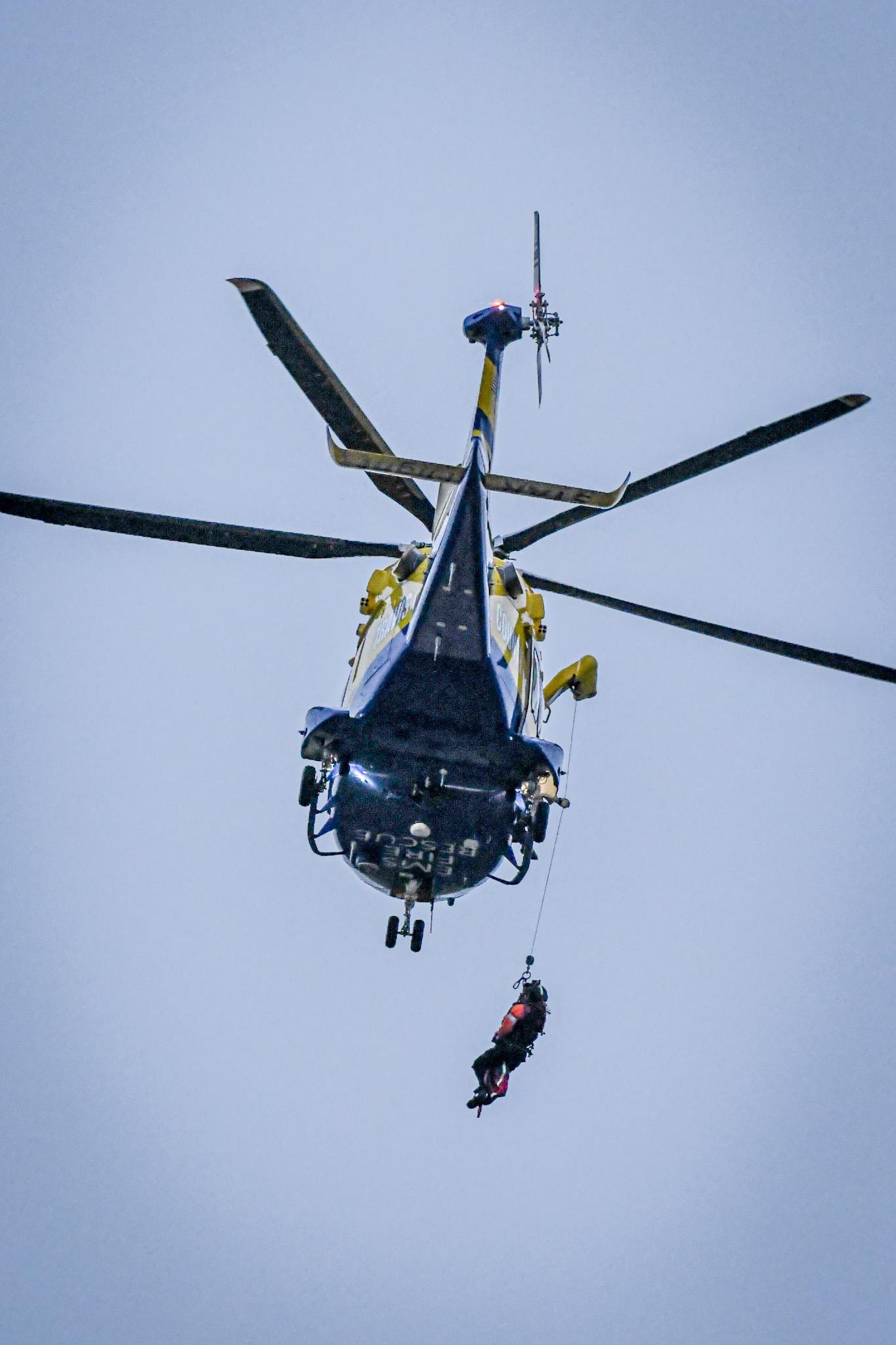 Editor’s note: This story is the final installment of a four-part series looking back at the year that was — 2021.

During the final three months of the year, Texas State announced a new fundraising effort to become a Tier 1 university, the City of San Marcos held elections and Sights & Sounds of Christmas returned.

In early October, 23 species from the Endangered Species Act (ESA) were  proposed to be delisted by the U.S. Fish and Wildlife Service, including a fish native to the San Marcos River — the San Marcos Gambusia.

The San Marcos Gambusia is a freshwater fish that was found in the slow-flowing section of the San Marcos River. It’s known as one of three gambusias located in the river. The colorful gambusia known to be about one-and-a-half inches in length was first put on the ESA list in 1980. The last confirmed sighting of the species was recorded in 1983. 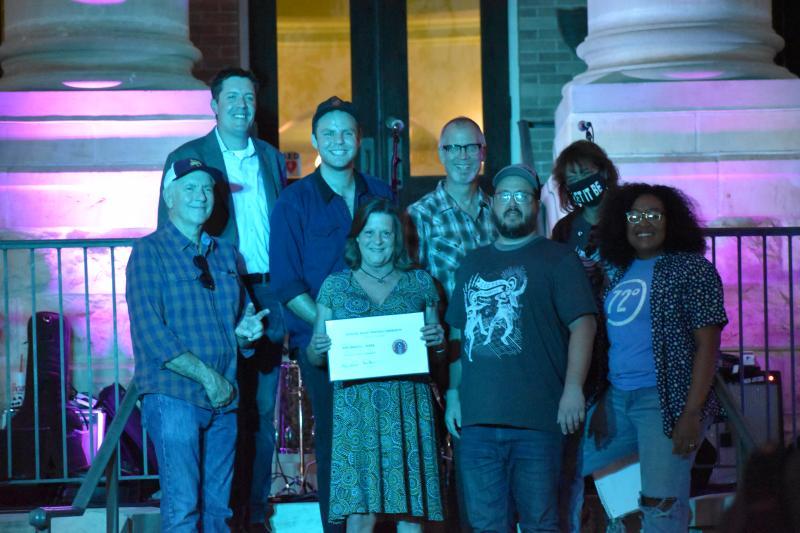 San Marcos City Councilmember Melissa Derrick holds a certification during a concert Thursday after the city was named a "Music Friendly Community" by the State of Texas. Daily Record photo by Alyssa Gonzales

The city, which underwent a multi-step process to receive the designation from the state, joined 29 other communities across Texas as a music friendly city. According to Abbott’s office, the Music Friendly Community program aims to foster music business-related economic development in Texas cities and communities.

Texas State University launched its largest fundraising campaign in school history on Oct. 8, which aims to raise $250 million for initiatives focused on student success and becoming a Tier 1 research university.

TXST publicly launched its “NEXT IS NOW” campaign Friday, which it said was in a silent phase since 2014. The university’s new fundraising effort already amassed $172 million contributed by over 40,000 donors and has increased its endowment from $165 to $300 million during the silent period.

“Texas State has come a long way in the past decade, and we're excited about what comes next," University President Denise Trauth said. “Our top priority remains fundraising for undergraduate scholarships and graduate fellowships that bring a Texas State education within reach of brilliant students. NEXT IS NOW is also laser focused on moving the university closer to our goal of becoming a Tier 1 research institution which brings tangible benefits to our students and to the state of Texas.”

The announcement took place at a press conference and prayer rally on the steps of the county courthouse in San Marcos. Representatives from ICI and supporting students from Texas State University provided information and sought community input for the center, also including rituals of prayer and song from local tribal culture.

“Before we do anything, we need the community to tell us what they want in an Indigenous Cultures Center,” said Dr. Mario Garza, the institute’s board of elders chair. “It’s our way that the people speak first, and then the elders take action.”

Amid heavy rainfall on the morning of Oct. 14, San Marcos first responders rescued eight people and two dogs from floodwaters.

“The San Marcos Fire Department wishes to extend our appreciation to the numerous street department crews and San Marcos Police Department officers for their efforts overnight that undoubtedly prevented numerous other rescue situations,” Stephens said in an email.

Early voting began on Oct. 18 leading into the Nov. 2 general election. Hays County voters had eight Texas constitutional amendments, while San Marcans had a sew of city propositions, as well as a pair of City Council races to consider.

Adil Dghoughi was killed in Martindale after he was shot on Oct. 11. Terry Duane Turner, 65, was arrested Friday — charged with Dghoughi’s murder — by the Caldwell County Sheriff’s Office. He posted a $150,000 bond just hours after being booked into the county jail.

“Adil loved everyone and made friends with everyone he met,” Dghoughi’s girlfriend SarahTodd said. “He was so giving and so kind. Anything anyone asked of him, Adil would do.”

On Oct. 23, it was time to blow out the candles, all 80 of them, and cut the ceremonial cake as the San Marcos Lions Club celebrated an anniversary.

A group of nearly 100 gathered at San Marcos Academy to reflect on its 80 years of accomplishments, and equally as important, the direction the club is heading.

“The challenges and successes this club has experienced; it's because it was all created 80 years ago with a vision. You stand together as a club — I can see that — I can sense that. And you stand tall,” said TJ Tijerina, International Director, Lions Club International.

On Oct. 29, Two San Marcos Police Department officers were added to a lawsuit stemming from a Biden campaign bus incident that occurred a year ago. SMPD Assistant Chief of Operations Brandon Winkenwerder and Cpl. Matthew Daenzer were added to the amended lawsuit.

The San Marcos Activity Center was closed indefinitely after flooding occurred in the building on Oct. 30 .

The City of San Marcos said initial reports showed that the flooding was the result of a 3-inch poly pipe that disconnected from its coupler. The disconnection caused several inches of water to cover the entire facility.

Antisemitic letters placed in plastic bags with pebbles inside them were recently found in the Willow Creek neighborhood in San Marcos.

The letters, which claimed “every single aspect of the covid agenda is Jewish,” and questioned why Jewish people “control” the media, were quickly reported to the San Marcos Police Department on Oct. 30.

A City of San Marcos spokesperson said the fliers were collected by police. SMPD is consulting with the Hays County District Attorney’s office on an investigation

The work began on the construction project in October and will address instream structures and bank improvements. Underwater voids and undercuts have formed in the bank and instream structures throughout the Rio Vista Falls area and require maintenance

During the Nov. 2 election,  Mark Gleason and Jude Prather each claimed victory in their respective San Marcos City Council races.

The elected councilmembers were sworn in on Nov. 15.

Chem-Energy will develop two innovative solar and battery power plant facilities in Caldwell County. The first is set to begin construction on 3,511 acres in Caldwell Valley Ranch near Uhland in Spring 2022 and become operational by the following year. The second facility will be located in the Martindale ETJ, GSMP said, adding that construction is expected to begin after the completion of the first location.

A San Marcos teen was arrested on Nov. 10  in connection with an Austin synagogue fire. Franklin Barrett Sechriest, 18, was charged with arson following an investigation conducted into the fire that took place at Congregation Beth Israel, 3901 Shoal Creek Blvd. in Austin, on Halloween. Federal charges were later levied against Sechriest in connection with the fire.

On Nov. 12, Texas State University renamed two residence halls after six women who made history while attending the school.

Reyes will step into her role on Feb. 1, 2022, following Lumbreras’ retirement.

In early December, following a 38-day search, former Mayor Daniel Gurrero was reunited with his missing tortoise.  Ben Kvanli, local river enthusiast and more notable, an Olympic kayak competitor, found Diego near the State Fish Hatchery, the south side of the river closest to the fish hatchery on Dec. 3.

“He was dehydrated, excited, hyperactive and a bit dirty but healthy and happy to be home,” Guerrero said. “He was happy to be home and celebrated by chasing both dogs all over the house.”

“I’m asking for justice and I will not give up until I get it,” Watts said. “I’m not asking for much. I’m a law-abiding citizen that expects the justice system to work and I will fight for Jen to the death because this is wrong. [Hartman] removed an angel from the Earth and there is not even a blimp, a pimple, on his driving record … They are protecting a police officer and it is wrong. They should be on the same level of justice as any citizen.”