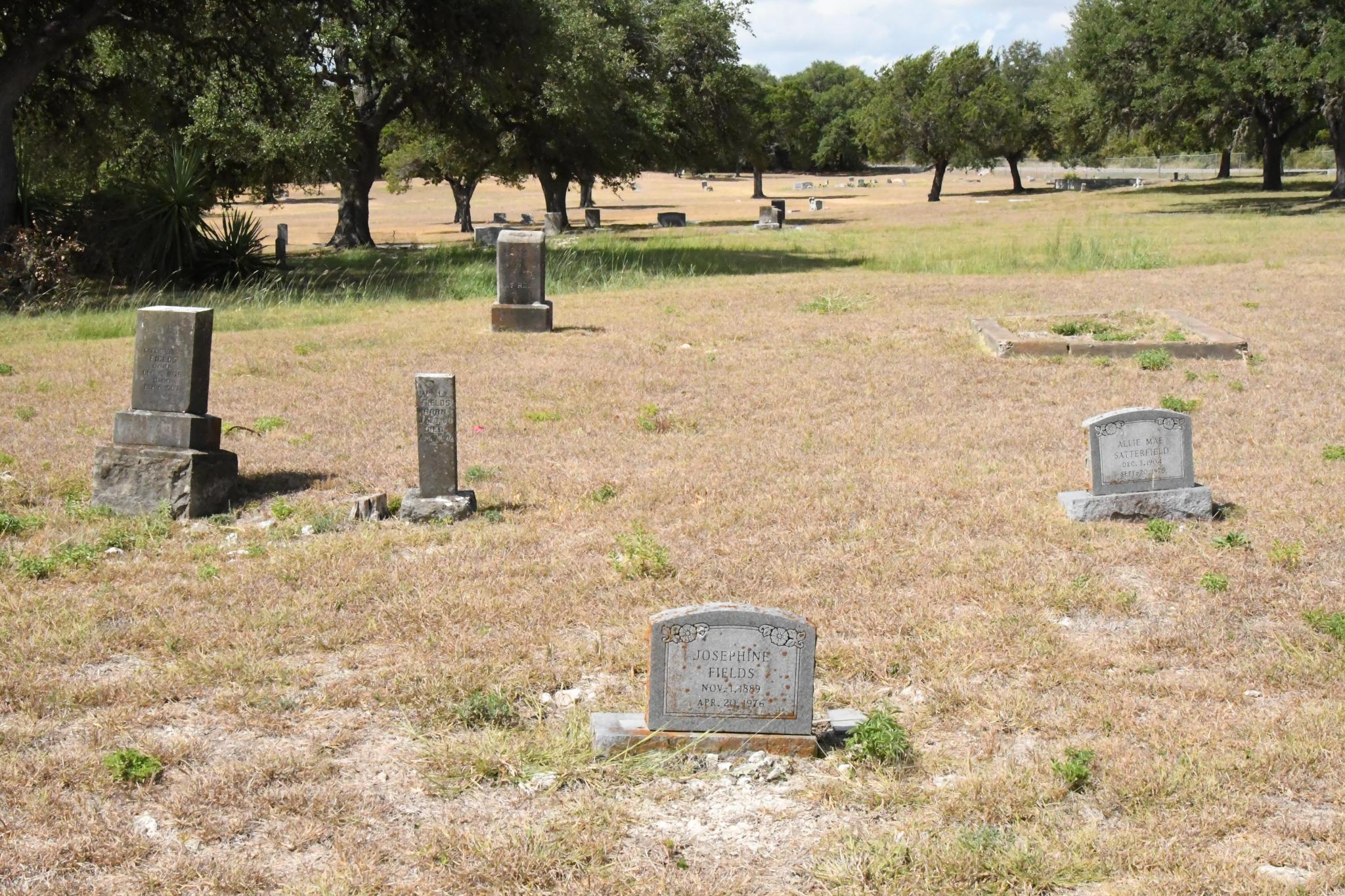 The San Marcos-Blanco Cemetery was established in 1893 by five Africa- American men — Wyatt Newman, James Landon, Henry Richardson, Lucky McQueen and Miles Bowen. The 10.62 acres were purchased for $200 cash and a deed signed in June of 1893. The cemetery is located at 2300 Post Rd. Daily Record photos by Lance Winter

During the late 1800s through the mid-1900s, segregated cemeteries sprang up across the United States as emblems of institutional racism. These cemeteries expose an uncomfortable collective history that historian Jane Heffelfinger hopes to shed light on during a presentation at the San Marcos Public Library.

This Wednesday, Sept. 11 historian Heffelfinger will give a presentation on San Marcos’ own African-American segregated cemetery, the San Marcos-Blanco Cemetery, and specifically the soldiers and veterans interred there.

Heffelfinger graduated with her master's from Texas State University in 2018. Now she is working on a series of books that are an extension of her original thesis: "The Continuing Conflict, Resolution, and Compromise Found in African American Burial Sites."

Even though her thesis was about 300 pages long, she didn’t feel like it hit the subject from as many aspects as she wanted. So she has decided to extend it into a book series and she already has the first manuscript well on its way.

“This project, I needed to do it that way so that I could get everything in that I wanted, because I tried to hit it from all different aspects,” Heffelfinger said. “The manuscript, which is what I'm looking to finish now, it has one chapter that remains and that's the chapter with input from the community, from the descendants of the African-American soldiers and veterans that are buried in the San Marcos-Blanco Cemetery.”

The San Marcos-Blanco Cemetery was established in 1893 by five African- American men — Wyatt Newman, James Landon, Henry Richardson, Lucky McQueen and Miles Bowen. The 10.62 acres located at 2300 Post Road were purchased for $200 cash and a deed signed in June of 1893. Officially, it became the San Marcos-Blanco Association Cemetery in 1901. Today there are more than 400 graves with headstones and inscriptions. Many others do not have headstones, and are unmarked and undiscovered.

“During my research, I came across one of these fellows named Oscar Williams and there were some stories that were associated with him that I thought were interesting,” Heffelfinger said. “I thought, well, maybe if I get some time later, I'll look into him. Well, I made a family tree on him on Ancestry.com, because that's where I was doing most of my work with Dr. Juarez, and like 6 months after I'd finished all that work with Juarez I went back on Ancestry.com because somebody had contacted me.”

The person that had contacted her was Courtney Williams, from Tucson, Arizona, a descendent of Oscar Williams that wanted to know more about him. Heffelfinger and Courtney Williams kept in contact. Heffelfinger would send her any info she came across in her research, and eventually Williams and her father decided to travel down to San Marcos to see where some of their ancestors were buried and to meet some of their living relatives for the first time. 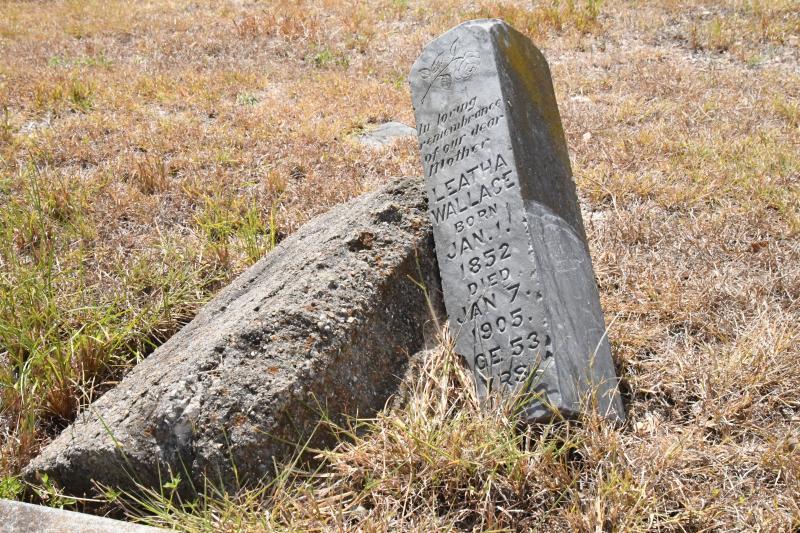 “All of my family has a history in the military. So I'd go out by the cemetery and I would be sitting there and I thought I don't ever see any of these with flags on them hardly and I thought 'I know there are more military men in this cemetery than just one or two,'” Heffelfinger said. “So I started going out on every military holiday — Memorial Day, Fourth of July, Veterans Day or around the holidays — to see if anyone was doing anything with these soldiers. And they weren't, in fact, the grass got so tall, it was covering up a bunch of the stones.”

So Heffelfinger started documenting all the headstones out there with a specific interest in the veterans’ graves. She wasn’t the first to start this work though. Ollie Giles, a local African-American historian, began the work of documenting the cemetery in the 1990s. Heffelfinger said it was Giles’ work that lead the way and that she has gone to Giles for many of the photos and documents needed to record the people buried in the cemetery.

“As a historian, I'm relying — because we've had so much false history — on predominantly primary sources from the time that I'm working with, which is the mid-to late-1800s to the mid-to late-1900s, which was when segregation was in its highlight, when it was enshrined in so many laws,” Heffelfinger said.

Primary sources, in historical context, are legal documents that record information about one’s life — birth and death certificates, military registration papers as well as manuscripts, photos and any other original sources of information.

But Heffelfinger is also looking for information, photos and documents that families themselves have passed down about the people buried in the San Marcos-Blanco Cemetery. For her it’s a way to honor those that served but were still denied respect by society.

“That's one reason I'm having this presentation because I need this information from the family. I'm dedicating an entire chapter to their story, because I'm trying to thank not only the soldiers and veterans that were displaced by the social circumstances of that time, but I'm also trying to thank their families who have had to feel the repercussions of this every time they go out there,” Heffelfinger said.

She said, the fact that families, like the Williams, have lost connection with their relatives because of segregation brought to her attention how detrimental to the family unit segregation was and the effects it still has today.

“The Williams family, when they contacted me from Arizona, they got me thinking how segregation, for African-American families, could be just as detrimental to the family situation as slavery was,” Heffelfinger said. “Because a lot of people moved because they needed to flee from segregation, and the threats of violence from segregation. And I'm still struggling with how to say that something is equally as detrimental to the family unit as slavery, because that's been our benchmark for what's bad for so long.”

In recent years, according to Heffelfinger, historic segregated cemeteries have started to be demolished and developed over, meaning that in many cases the histories of the people that were buried, will become truly buried and irretrievable. It’s part of the reason she felt so much urgency in her project.

Heffelfinger’s presentation "Naming Names: African-American Soldiers and Veterans of the San Marcos Blanco Cemetery" will be on Wednesday, Sept. 11 from 6-7 p.m. at the San Marcos Public Library. For more information, call 512-393-8200.