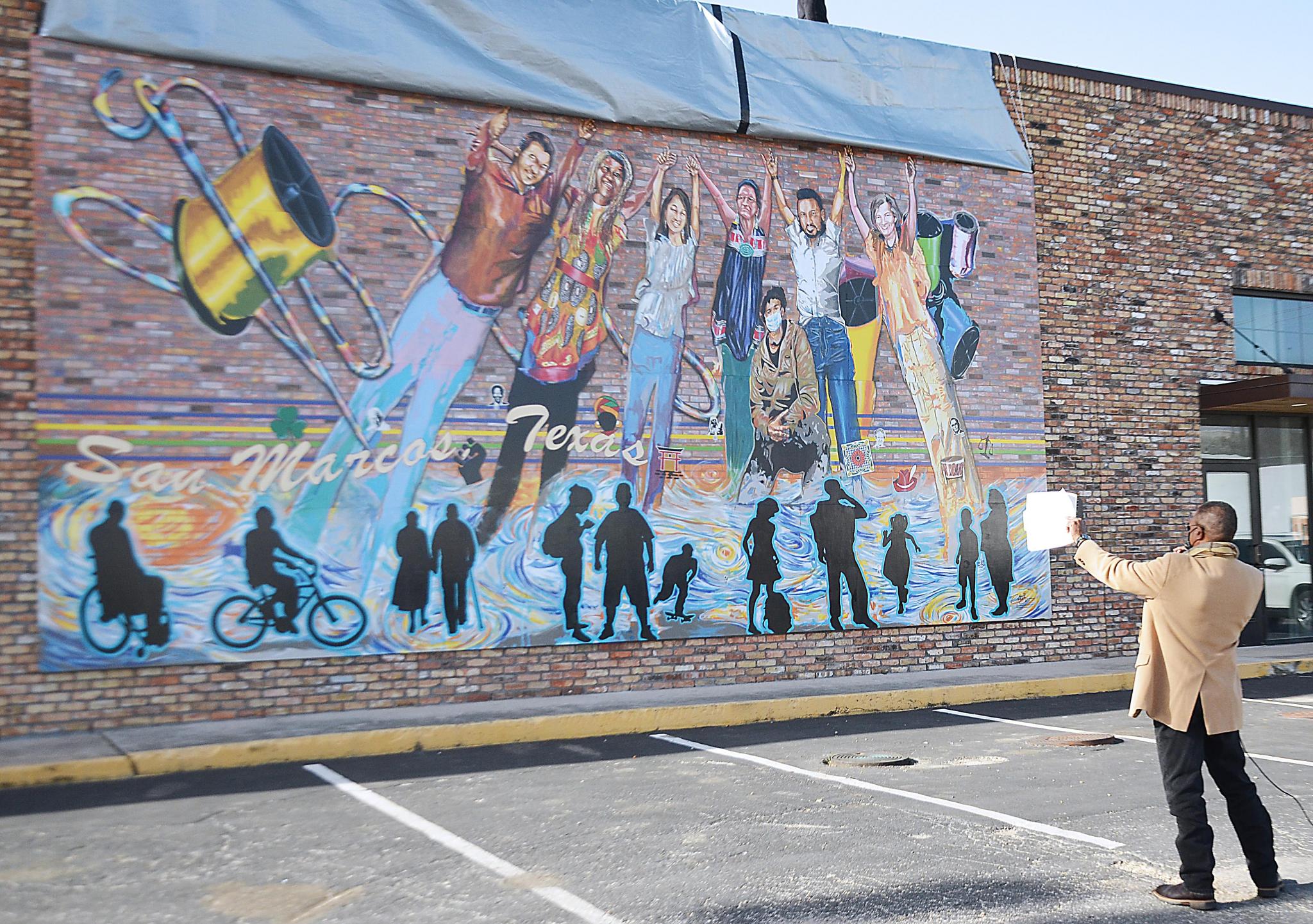 With only a few words of inspiration given to him, artist Robert Jones transformed a 16 foot by 32 foot medium density overlay plyboard into a mural highlighting San Marcos’ cultural diversity.

The new mural located near the corner of MLK Drive and LBJ Drive was unveiled Saturday morning in front of a small, socially-distanced crowd. The painting aims to showcase San Marcos’ many local cultures and proclaim how each have come together to better the city.

“I thought about, as I was executing this, everybody has something in common,” Jones said. “And that commonality is the piece of thread that sows us all together.”

The mural — entitled Celebrate Diversity: Our Common Thread — features six people of different cultures holding hands. A man can be seen squatting while wearing a face mask, capturing the time we are living in amid the COVID-19 pandemic.

Inspired by Vincent Van Gogh’s famous Starry Night, silhouettes of families, bicyclists and students can be found on the painting surrounded by the swirling sky painted in blue, light blue, yellow and orange.

“That can be us at any given time,” Jones said. “Hence, that’s why they’re kinda of silhouetted out. We can really place ourselves in any one of those situations at any particular time — family and friends and as an individual.”

A needle and thread is also included in Jones’ work, as well a cultural symbols, including Mexican ceramic sculptures, a fedora, an Asian pagoda, African headdress, Black Lives Matter symbol and a clover. Connecting the many elements is a music staff.

The project was created in collaboration with the Downtown Association of San Marcos, the Dunbar Heritage Association, Centro Cultural Hispano de San Marcos and the Indigenous Cultures Institute. Funding for the mural came from generous donations by the over 20 local businesses and citizens.

“I think that it encapsulates everything that we talked about as a community, as a committee, what we wanted to see,” Blythe said. “I just love the fact that we were able to give (Jones) some words and he was able to take those words and transform them into this amazing piece that is going to be a legacy to the San Marcos community, hopefully forever. This is a beautiful piece. I love it.”

Included in the mural are QR codes featured alongside cultural icons from the San Marcos community — Dr. Mario Garza, Tex Hughson, Harvey Miller, David Chiu and Ofelia Vasquez-Philo. By using your phone, the QR code leads you to an augmented reality app, which gives additional information about people featured in the mural and their contributions to San Marcos.

“What I love about those icons is that you can come here and you can really kind of take some time and inspect each and every one of them,” Blythe said. “It elicits conversations around those topics. You can start to talk about and discuss with your children, with your family, with friends that come to visit San Marcos. What do those mean? Where did they come from?”

Jean Baggett, who’s on the Downtown Association of San Marcos’ Board of Directors and mural committee, said the painting displays how each culture has contributed to San Marcos.

“This mural is a testament to all our local cultures and a proclamation of how each of us have contributed to make San Marcos a special place to live,” Baggett said. “Together we have and can continue to make the community a shining beacon for other cities. As you can see in the mural, we are all holding hands and doing so, we gather energy and encouragement from each other to create an even better city.”