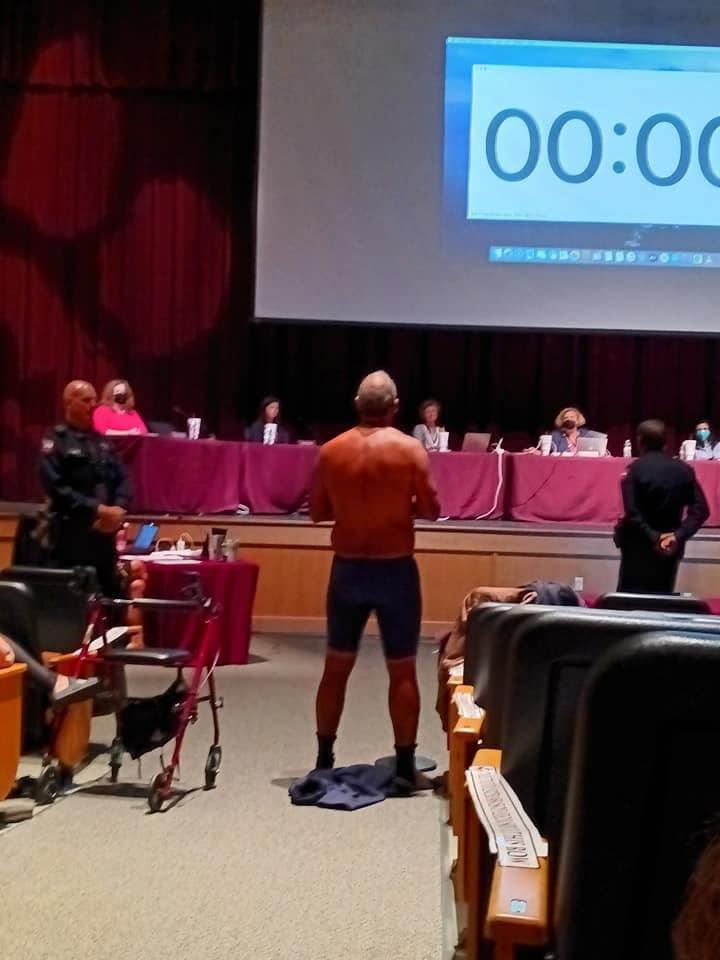 Pants on the Ground: Dripping Springs resident strips at DSISD board meeting

DRIPPING SPRINGS — A meeting for the Dripping Springs Independent School District’s board of trustees quickly descended into chaos when one local man took off all but his underwear during a public forum.

The latest in a series of heated school board meetings in Dripping Springs, the meeting on Monday, Aug. 23 was intended as little more than an agenda review in preparation for the regular board meeting on Aug. 30. Agenda items included institutional partnership agreements, financial reports, construction updates, and bond information. However, those who spoke in the opening public forum focused on little more than whether or not the board would shift from their current mask-optional stance.

The period of public comment began with statements similar to those of the last few weeks, each person given a minute and a half to speak. Parents frequently emphasized the role of the school board as an educational entity, saying it should continue to focus on teaching students more than enforcing masks.

“I’m asking you to not increase your COVID-19 protocols,” said Rebekah Dutton, local parent and volunteer with DSISD middle and high schoolers. “Y’all have worked so hard to provide options for those who want and need them, and I am not trying to take those away… but it is not your job to be the health department.”

Those of the opposite opinion reiterated the importance of putting in place rules for the protection of others, such as imposing mask mandates. The concept of inconveniencing some for the benefit of everyone isn’t new, said James Akers, a resident of the Dripping Springs Community for 15 years and parent of a current Dripping Springs High school student.

“On the way over here, I ran three stop signs and four red lights,” he continued ironically. “I almost killed somebody out there, but by God, they’re my roads too. So I have every right to drive as fast as I want to, make the turns that I want to. I got over here to the school today, and the parking lot was full, and I decided I was going to park wherever the hell I wanted to — which, in this case, happened to be a handicap [spot].” He took his pants off, as officers began to close in around the front of the room.

The timer, which had been all but ignored throughout the majority of the meeting, became nothing more than a blinking “0:00” in the background as those in attendance wondered what he was going to do next.

Board President Barbara Stroud quickly interjected: “Mr. Akers, I believe you’re a swimmer, but if you wouldn’t mind putting your pants back on for a comment, that would be greatly appreciated.” Akers obliged, fist bumping the officer that came up to him before walking back to his seat.

The rest of the meeting proceeded somewhat normally, with plenty of opinions and emotions about mask wearing and potential mandates. Cheers, interruptions, and applause were common, despite many requests for silence and bangs of the president’s gavel. However, no action was taken, as promised by the board before the meeting.