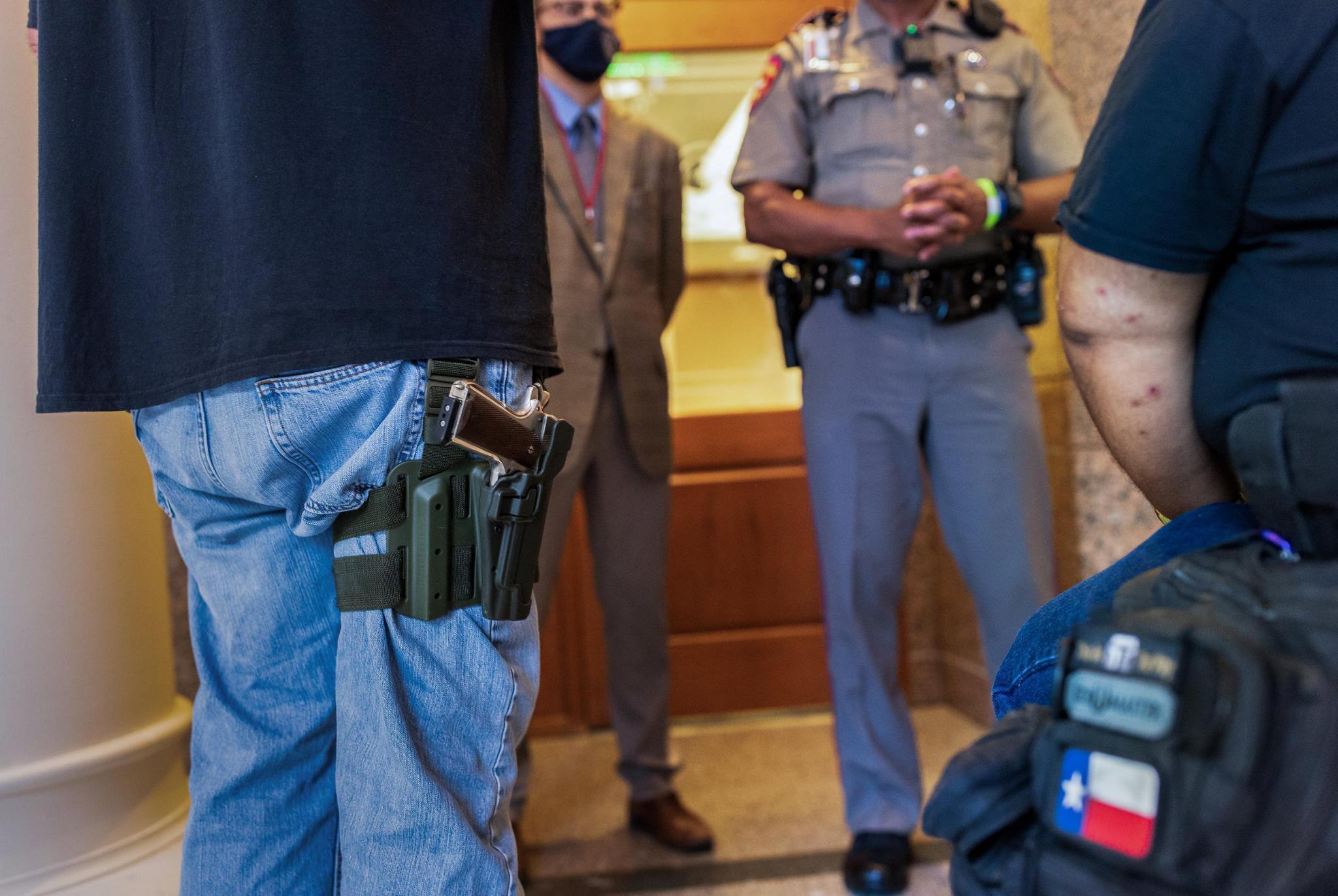 Two gun rights activists argue with a state trooper who will not allow them to enter an overflow room due to COVID-related restrictions at the Capitol on April 29, 2021. Credit: Jordan Vonderhaar for The Texas Tribune

Permitless carry of a handgun in Texas nearly law, after Senate OKs bill

The Republican-led effort to allow Texans to carry handguns without any kind of license cleared what is likely its biggest remaining hurdle in the Capitol on Wednesday, when the Texas Senate moved in a nail-biter vote to bring the measure to the floor and then passed it.

The measure – already passed by the Texas House – heads to a conference committee for the two chambers to hash out their differences, unless the House accepts the Senate amendments. Then, the bill heads to Gov. Greg Abbott, who said last week he would sign the permitless carry bill into law.

House Bill 1927 would nix the requirement for Texas residents to obtain a license to carry handguns if they’re not prohibited by state or federal law from possessing a gun. The Senate approved the bill in a 18-13 vote along party lines, less than a week after it sailed out of a committee created to specifically to tackle the legislation.

Proponents of what Republicans call “constitutional carry” argue that Texas should follow the lead of at least 20 other states with similar laws on the books. Meanwhile, gun control advocates are sounding the alarm about making it easier to carry firearms after repeated instances of gun violence — including 2019’s massacres in El Paso and Midland-Odessa.

Under current state law, Texans must generally be licensed to carry handguns openly or concealed. Applicants must submit fingerprints, complete four to six hours of training and pass a written exam and a shooting proficiency test. Texas does not require a license to openly carry a rifle in public.

“This bill, to me, is a restoration of the belief in and trust of our citizens,” said state Sen. Charles Schwertner, R-Georgetown, who is carrying the legislation in the upper chamber. “We cannot allow another session to come and go where we pay lip service for the Second Amendment by failing to fully restore and protect the rights of citizens granted by the Constitution.”

The bill’s fate remained uncertain heading into debate on Wednesday morning and led to a rare case of the GOP-controlled Senate taking up a bill with unclear odds at passage. Ultimately, every Republican supported the bill, but a handful of key senators admitted in debate that they have reservations about certain provisions — namely a lack of support from law enforcement.

Lt. Gov. Dan Patrick and other Republicans who were initially noncommittal had been under immense political pressure from conservatives and gun rights advocates, who have for years lobbied the Texas Legislature for permitless carry but historically struggled to win support.

“I have struggled with this, and I am a strong, strong supporter of the Second Amendment,” Nelson said Wednesday before voting in favor of the bill.

Leaders in both chambers previously held permitless carry at arm’s length, but the cause quickly gained momentum this year, during the state's first legislative session since 30 people were killed in the back-to-back 2019 shootings.

Patrick has expressed reservations about permitless carry in the past. Ahead of the 2015 session, he said he did not think there was enough support among lawmakers or the public, a sentiment he reiterated in 2017 while citing law enforcement concerns with “anyone being able to walk down the street with a gun and they don’t know if they have a permit or not."

A solid majority of Texas voters don't think permitless carry should be allowed, according to the latest University of Texas/Texas Tribune poll.

During Wednesday’s debate, several Democratic senators raised concerns that repealing the licensing requirement would allow people to carry handguns without a background check or training. Texas does not require background checks for private gun sales.

“This will be the first time … that we will not look to training or background checks or law enforcement or the authorities to know who they are dealing with,” said state Sen. John Whitmire, D-Houston, adding that permitless carry is a “huge departure from where we’ve been before.”

Schwertner argued that gun safety is a personal responsibility.

“The [licensing] requirement is what is being set aside; the obligation on the part of the citizen who owns a potentially dangerous weapon to understand gun laws, to become proficient in their handling of their gun, is not absolved,” Schwertner said.

“If I sit down at a restaurant with a gentleman or a woman who has a holster on their side and a gun in it, I want to know that person is well-trained in the use of that gun, and I know that police officers across the state of Texas want to understand that,” said state Sen. Beverly Powell, D-Burleson. “We owe [law enforcement] every single tool in the toolbox, and a seat at our policy making table, as we make decisions like this one about public safety issues.”

The Sheriffs’ Association of Texas signaled tepid support on Wednesday when they sent a letter to Schwertner that outlined three key areas of the bill that required “critical, must-have clarifications and amendments.” Those tweaks, offered by Schwertner on the floor, strike from the bill a provision that would’ve expunged certain weapons-related charges on Texans’ criminal records, allow law enforcement officers to temporarily disarm a person who is detained and temporarily strip the permitless carry rights of people accused of certain violent crimes.

“With this language in the final version of the bill that protects law enforcement officers and the rights of law-abiding citizens, SAT supports HB 1927,” the sheriffs wrote.

Lawmakers approved an amendment barring permitless carry from people convicted in the past five years of making a terroristic threat, deadly conduct, assault that causes bodily injury or disorderly conduct with a firearm.

Senators rejected a number of amendments by state Sen. César Blanco, D-El Paso, that would codify gun safety provisions Abbott proposed after the 2019 shootings by requiring background checks for gun sales between strangers and requiring courts to notify criminals that they may no longer possess a firearm, among other changes.

Blanco said such amendments were necessary “so we're making sure if we're going to go down this road … we're keeping guns out of the hands of actual criminals.”

“We need solutions,” Blanco said. “How many more lives have to be robbed?”

During final debate on the proposal, state Sen. Brandon Creighton, R-Conroe, collapsed on the Senate floor and received medical attention from the Texas Department of Public Safety. Spokesperson Erin Daly Wilson tweeted that Creighton was involved a car accident on Thursday and sustained minor injuries.

"He spent the last few days resting, and returned to the Capitol for the critical work of the legislature and to ensure a majority approve H.B. 1927," she said.

This article originally appeared in The Texas Tribune at https://www.texastribune.org/2021/05/05/constitutional-carry-guns-texas-legislature/.