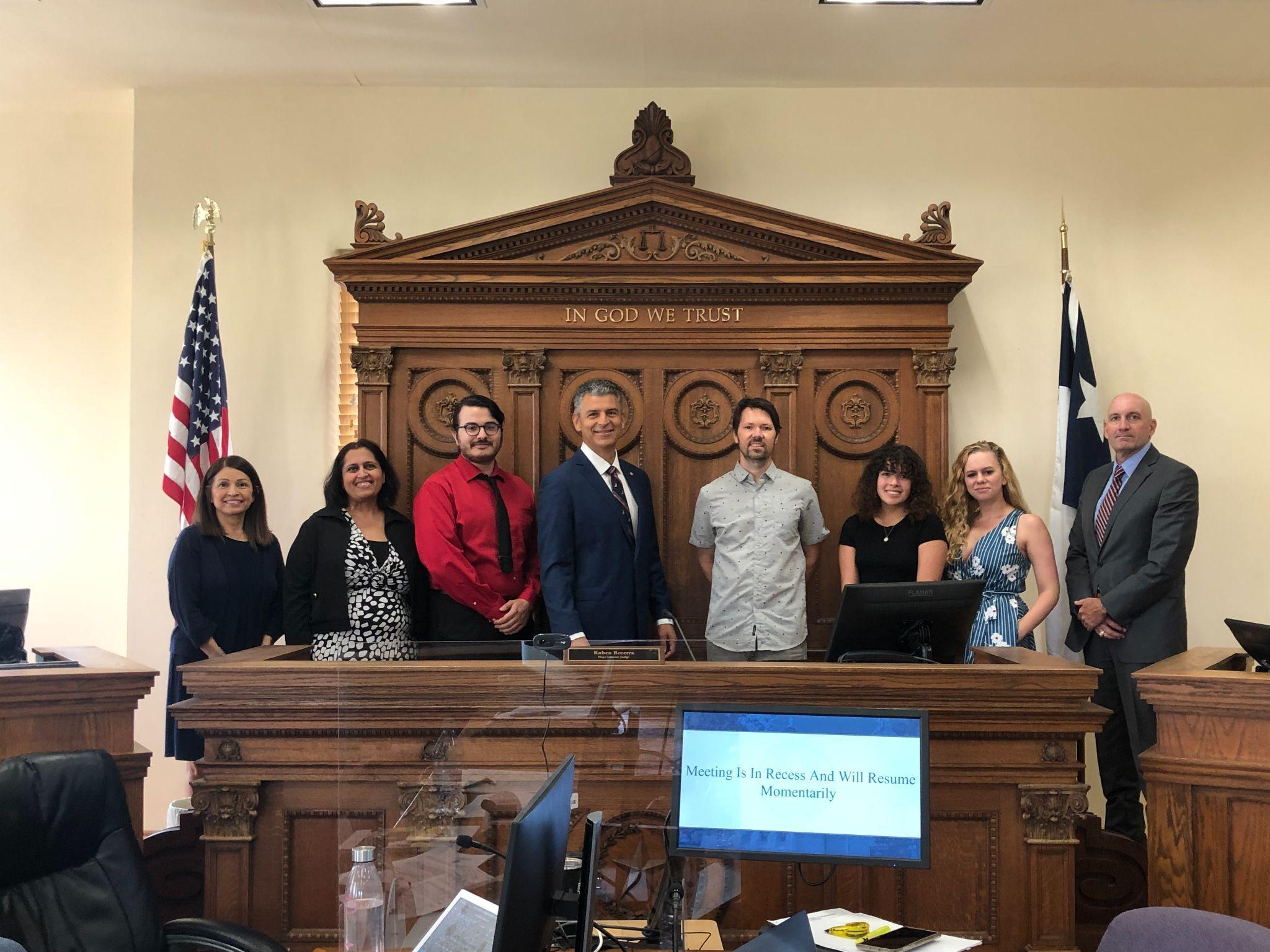 Above, Hays County Judge Ruben Becerra and Commisioners Debbie Ingalsbe and Lon Shell pose for a photo with members of Mano Amiga after the court chose Neighborhood Defender Service (NDS), Inc. as a firm to use for a public defenders office. Photo courtesy of Mano Amiga

The Hays County Commissioners Court took another step toward a public defenders office during Tuesday’s meeting.

Following much discussion and consideration, the commissioners approved Neighborhood Defender Service (NDS), Inc. as the selected vendor in moving forward with the creation of a PDO.

Along with the commissioners, local immigration and legal reform organization Mano Amiga has advocated for the creation of a PDO in Hays County.

“So much good is going to come from this decision and we’re so grateful for each of you for deciding to bring a superior form of indigent defense to our county,” Mano Amiga Communications Director Sam Benavides said during public comment.

Precinct 3 Commissioner Lon Shell spoke of how the court chose the path that includes developing a contract with an entity to provide the services for a PDO.

“One was Neighborhood Defender Service, and the other was Texas RioGrande and so both of those entities responded to the RFP and both of them provided information to the county on how they believe they could best build an office in Hays County to serve the needs of Hays County,” Shell said.

Shell along with Precinct 1 Commissioner Debbie Ingalsbe and General Counsel Mark Kennedy served as the selection committee that researched and interviewed the two firms.

“We had one round of interviews with both respondents that was led by our Purchasing Office, Stephanie [Hunt] put together questions,” Shell said.  “We asked those questions, she took down all of the answers of both respondents then presented that to them afterward to make sure that she was accurate in her and how she interpreted their answers and those have been shared with all of the court members.”

Shell further explained that rather than having the committee choose which firm, it would be more beneficial to have a public conversation about which direction to go in. He also touched on the rise of inmates in Hays County  and outsourcing overtime.

“We have, I think as of today, almost 700 individuals in our custody, 200 and something of those are not being held in Hays County, there as far away as the Red River, which many of you know is the border between Texas and Oklahoma and there are as far away as Maverick County which is on the border between Texas and Mexico, and everywhere in between,” Shell said. “That is not good for criminal justice, we can all understand that. Trying to represent an individual that is not even anywhere near you, as a defense attorney is very challenging, that causes delays in our courts that causes more time spent in our jails before we can get these cases heard.”

Shell and Ingalsbe also talked about the heavy focus on mental health needs when it comes to the creation of the PDO.

Prior to making the selection, Shell, Ingalsbe and Precinct 2 Commissioner Mark Jones voiced their support for NDS. Precinct 4 Commissioner Walt Smith initially showed support for Texas RioGrande Legal Aid, Inc. Smith also made a point about focusing on the prisoners rather than victims.

“We had, over the last three years, in my view, a very biased view of the outcomes of what should come out of our justice system here,” Smith said. “It’s been very focused on the individuals that may or may not have committed these crimes and it hasn’t been rightfully focused on the victims.”

Shell answered to that saying that while he understood Smith’s point, the creation of a PDO is in no way intended to cause negative impacts to public safety.

Ingalsbe also made a point, saying “Mr. Smith, thank you for your comments but I hope that no one in this court or in this room would ever think that we didn’t care about the victims and I’m sorry that I’m getting a little emotional but that’s just insane that we wouldn’t consider [the victims] in everything that we do.”

Ingalsbe also gave background on the NDS team and their roots in Texas.

Smith later clarified, saying “If we’re going to spend billions of dollars on a PDO, what do we have in line or what are we considering? What should we consider to ensure that on the other side of that equation for victim services officers, for our mental health officers to respond to scenes to try to help these individuals? What are we doing on that side to try to better assess their situations?”

Hays County Judge Ruben Becerra spoke of how the creation of the PDO would open up access and better assist with overcrowding in the jail.

“I will forever be grateful for the work that everyone in this commission, and in this court, and in this community has done to bring us to today,” Becerra said. “Because heaven forbid, one day one of us or one of our friends or family end up in this loop without the proper funding.”

Following this decision, a contract will be brought back before court for further consideration.

For the complete meeting and agenda, visit https://hayscountytx.com/commissioners-court/court-video.