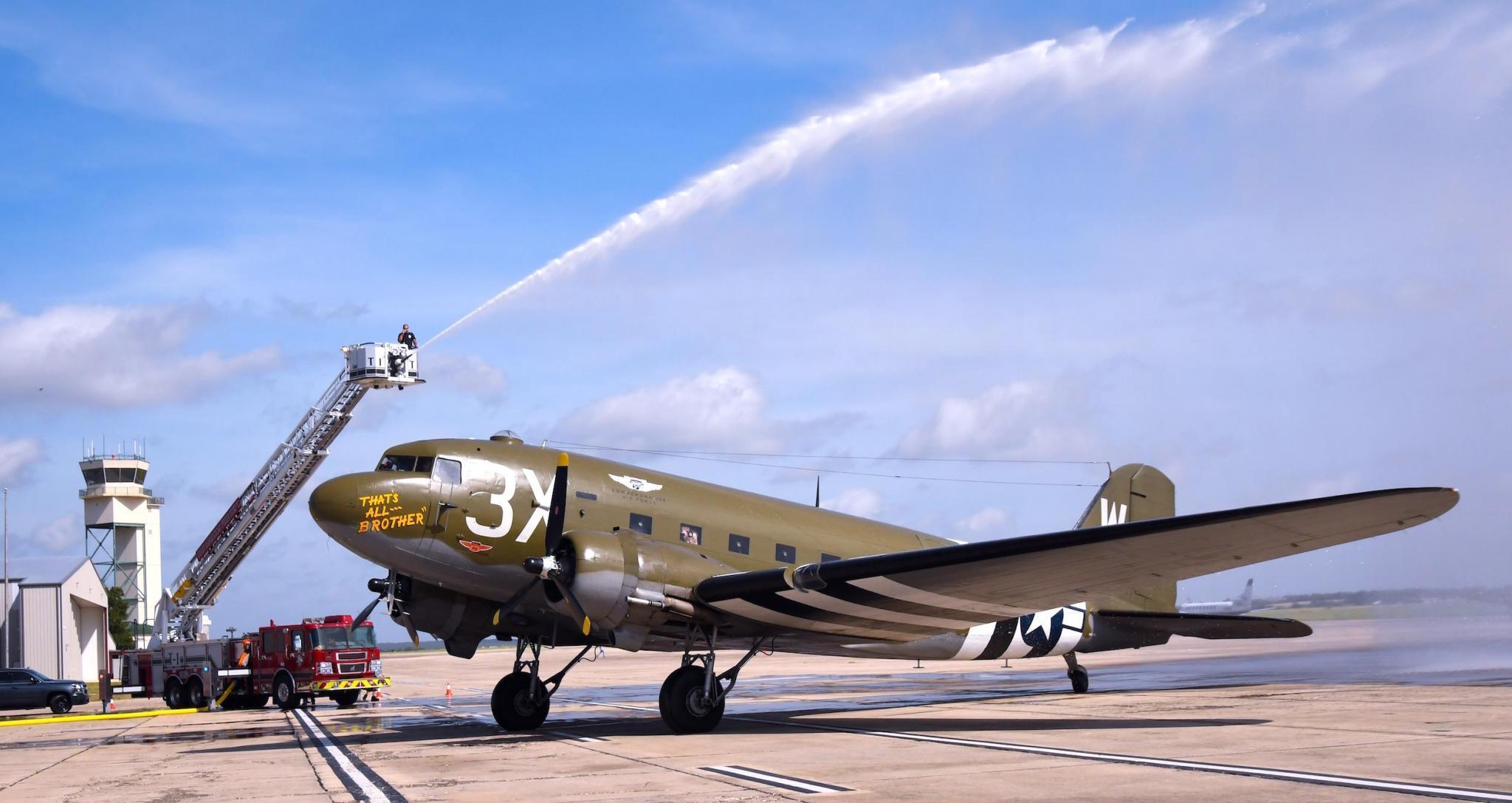 That’s All Brother receives a water salute from the San Marcos and Buda fire departments at the San Marcos Regional Airport after returning safely from a month-long trip to Europe to commemorate the 75th anniversary of D-Day in August. Daily Record photo by Lance Winter

The San Marcos Regional Airport held an open house to showcase a new master plan for the airport this week.

On Monday afternoon, the airport introduced a new master plan for the facility. Since December of 2018, Garver — the planning firm — has been working with a Master Plan Advisory Committee and a stakeholder group on the plan, which will be broken down into a list of capital improvement projects. Then, an airport layout plan will be sent to both city council for their approval, as well as to the Texas Department of Transportation’s Aviation Division, who will send the plan to the Federal Aviation Administration for funding approval.

Texas Aviation Partners Director of Marketing and Business Development Cassidy Berenato said the last time the airport master plan was updated was in 2001.

“We’ve gone through and we’ve looked at what are our current operations, what is the current population in the area? Because this airport doesn’t just serve the City of San Marcos,” Berenato said. “It serves the greater Hays and Caldwell County region, so they looked at what does the population growth look like? What does the industry growth look like? Median income? What industries are the city and county looking for? Where do we see the interest coming from? How many base aircraft do we have? How many base aircraft do we expect to have in the future?”

By analyzing those questions through research from the U.S. Census Bureau, the Aircraft Manufacturers Association and the FAA, Berenato said the planners were able to get a good baseline of where the airport is today and where the airport will be in 5, 10, 15 and 20 years.

The master plan presented at the open house had several alternatives for runways, taxiways and land use.

The primary alternative for taxiways makes changes to existing taxiways, which in turn opens up more areas for development.

“So it’s all just about efficiency on the airfield, how quickly you can get planes in and out, get everybody out of each other’s way and make it the most efficient taxiway system as possible,” Berenato said.

“The great thing about being able to market to non-aeronautical commercial operators is aviation, in general, is very cyclical,” Berenato said. “So when you have those non-aeronautical operators, you can help kind of steady out the revenue that the airport is getting, because it’s not as sensitive to these ups and downs that happen in aviation.”

Berenato said they wanted to make sure that the plan was as realistic as possible.

“We don’t want to make a decision today that’s based in a vacuum, where we could end up spending millions of dollars to do something that we think is the right thing to do today,” she said. “And it turns out that 2 to 5 years from now, we’re going to have to completely redo it or change it or become obsolete. That’s the worst thing we can do for this community. So in order to make a really smart decision on how to spend money, and how to improve this airport and continue to use it as an economic engine within this community, we have to be really strategic about not only what we do out here, but the timing and the order in which we do it.”