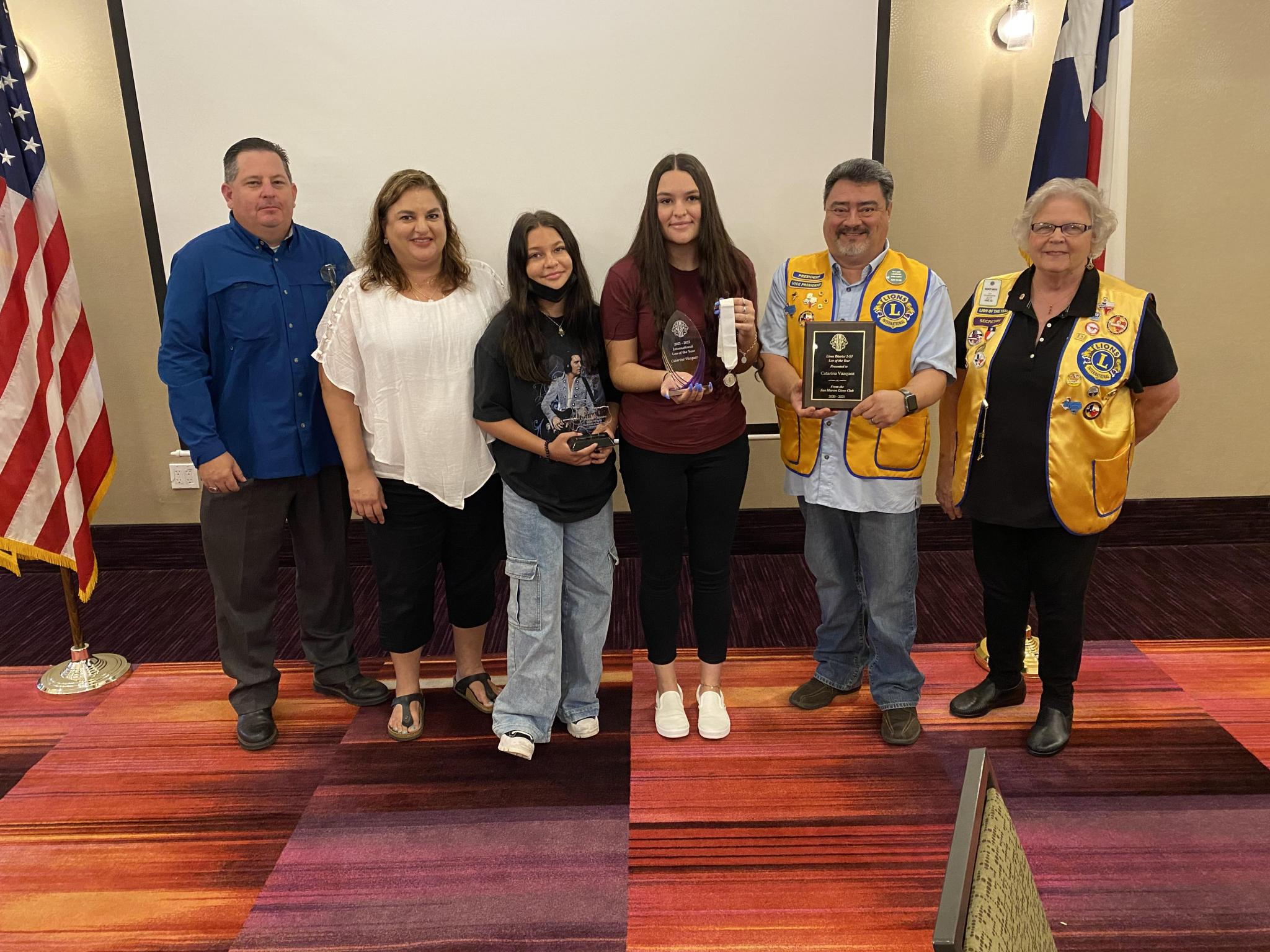 Recognized for her recent achievements by the San Marcos Lions Club, Catarina Vazquez receives a plaque from President Dennis Gutierrez at the club’s May 28 meeting. Catarina, a rising senior at San Marcos Academy, scored a “hat trick” by being named Leo of the Year at the district, state, and international levels. She is joined by her parents, Roland and Andrea Vazquez; her sister, Angelina, an eighth grader at SMA; and Nancy Smith, one of the Academy Leo Club sponsors. Photos by Rowe Ray

Catarina Vazquez, a rising senior at San Marcos Academy, was in for a double surprise when she represented the Academy’s Leo Club at the state convention in Waco on May 22.

“I feel extremely honored to have received this award,” Vazquez said. “I love having the opportunity to get involved in projects as a Leo, and am excited to continue serving as the District President this year.”

Vazquez served this past year as district Leo president (District 2-S3) and was re-elected to that position at the district convention May 1. As president, Vazquez represents close to 1,000 members in several Central Texas counties. She received the District Leo of the Year Award at the convention for her all-around dedication to the district Leo Clubs, her participation in local Leo service projects, and her involvement in other school and community events. That honor placed her in the running for the state and international awards.

At San Marcos Academy, Vazquez has been a board member for the school’s Leo chapter, which has become one of the most active organizations on the campus since it was chartered two years ago. The club is supported by the San Marcos Lions Club and sponsored by local Lions and Academy staff members Nancy Smith and Diane Groves.

“Catarina is an impressive young lady with a heart for serving others,” Smith said. “Our Leo Club is so proud of her and send a big SMA Bear congratulations to her.”

Leo Clubs are youth organizations of Lions Club International that provide middle and high school students the opportunity to be partners with local Lions Clubs in service. About 6,700 Leo Clubs have been chartered in more than 140 countries and geographic areas worldwide with about 168,000 members.