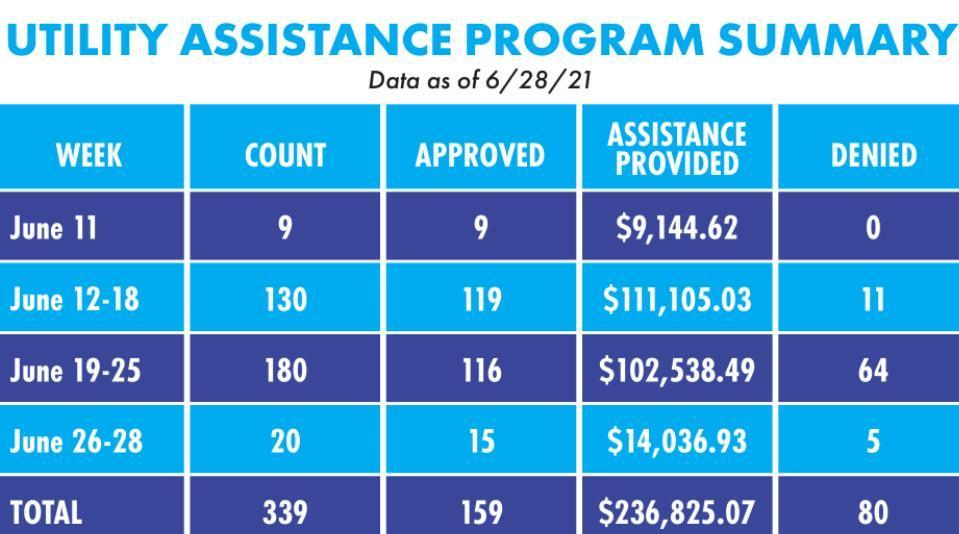 Above, counts of applications received for the City of San Marcos' Utility Assistance Program between June 11-28. Daily Record infographic by Colton Ashabranner

San Marcos City Councilmembers discussed ways to improve outreach for the city’s Utility Assistance Program and directed staff to move the utilities disconnection date to the end of August.

During Tuesday’s meeting, councilmembers reviewed the City of San Marcos’ Utility Assistance Program, which provides up to $1,500 in assistance on delinquent accounts to qualified residential customers who were adversely affected by the COVID-19 pandemic or Winter Storm Uri.

City Utility Billing Manager Ernest Cavazos said the city has provided the information regarding the program through multiple outlets.

“Outreach we’ve done is through social media,” Cavazos said. “We do have it on the (city’s) webpage. We have it posted in our lobbies and we’ve provided flyers to the (Hays County) Food Bank and other agencies that have requested copies of the flyer that we’ve created. I know that the school district put it out to all of the people that were attendees of the school district — San Marcos (Consolidated) Independent School District. All of those people were sent emails. So, that’s how some of the community was notified of the program.”

The city suspended utility disconnections and late fees in March 2020 due to the pandemic. But the city council previously voted to resume disconnections on Aug. 1, 2021.

Funding is available for city utility customers who have a delinquent bill 60 days or more past due on a first-come, first serve basis. Those seeking assistance must fill out a one-page application attesting that they were impacted by the winter storm or the pandemic and must provide documentation, including a valid photo ID or utility bill with account holder’s name within the last 90 days.

The city has allocated $1,075,081.32 for the Utility Assistance Program and, as of June 30, only $236,825.07 has been approved and used to pay delinquent accounts. Two-hundred-fifty-nine applications were approved, while 80 were denied, according to Tuesday’s presentation. Delinquent accounts not being 60 days past due was the reasoning behind a majority of the denied applications, 63. Other denial reasonings included no longer active accounts, credit balance on an account, duplicate applications, not an account holder, needed more information, and the account holder was deceased.

With over $800K in funds available, councilmembers made it clear better out reach is needed.

“It just seems somehow the word’s not getting out if we’ve got as many accounts as we have that are still, people are not taking advantage of (the program),” Mayor Jane Hughson said.

Councilmember Alyssa Garza said there are untraditional ways of getting information out to the community that should be utilized.

“I think in this situation it’s necessary,” Garza said. “Just wanted to share that we had volunteers from the nonpartisan League of Women Voters out there flyering and they requested handouts from the city and didn’t find them to be as helpful as they hoped for so they ended up making their own. So, yeah, there’s just different strategies that can be used. Just throwing that out there.”

Garza added that the city should lean on its informal and formal partnerships with organizations that are serving the community. “Maybe just leaning on those and just providing them with the handouts,” she said. “There’s just a lot of trusted community messengers that could get the word out for us that we could lean on. They’re the ones that show up on our boards and our commissions. They’re the ones that show up to give citizens commentary and they’re representative of different organizations.”

Councilmember Maxfield Baker said a plan should be created to ensure the funding allocated for the Utility Assistance Program goes toward helping residents in need.

“If that’s looking at some sort of GIS map with all of this on there and coming up with maybe like some of us do for our blockwalking for campaign season,” Baker said. “What is the highest impact I can go and talk to and knock on doors and be there to answer questions for somebody and put an application in their hand or help them fill it out right then and there. I think that’s the level of service that because of how complicated this, even the simple application process we tried to create, has become.”

Councilmember Saul Gonzales asked if outreach had been done with local churches, which Cavazos responded saying that it wasn’t done.

“I personally don’t think we’re doing enough,” Gonzales said. “One example I always bring up is, ‘Hey did we outreach to the churches so they do their part? Can we do that this round?’ I bring it up every single time we ever do an outreach. Did we do it this time around? There’s a lot of small, little churches, pocket churches here and there in the neighborhoods and those are the people that are really struggling.”

Hughson suggested that someone could be brought in to better market the program.

“People are receiving (the information), assuming they open their mailbox, but they’re not for whatever reason catching on,” Hughson said. “So, somehow, maybe it needs to look like a contest. I printed the application, maybe up at the top, it needs to say, ‘You may qualify for up to $1,500.’ Do it more as if you were selling televisions or cars or something.”

Councilmember Shane Scott suggested that the city should pay off the entire debt on delinquent utility bills, which will come back to council at a later date.

The city council also moved to extend the disconnection deadline from August 1 to August 31.

To download an application in either English or Spanish for the Utility Assistance Program visit: sanmarcostx.gov/utilityassistance. Applications can be submitted electronically or in person at the San Marcos Utility Customer Service Counter, 630 East Hopkins Street, or the San Marcos Electric Utility Office, 1040 Highway 123; by email at utility_billing@sanmarcostx.gov; by mailing, Attn. Utility Billing: City of San Marcos, 630 East Hopkins, San Marcos, TX 78666; or by fax at 855-759-2835.