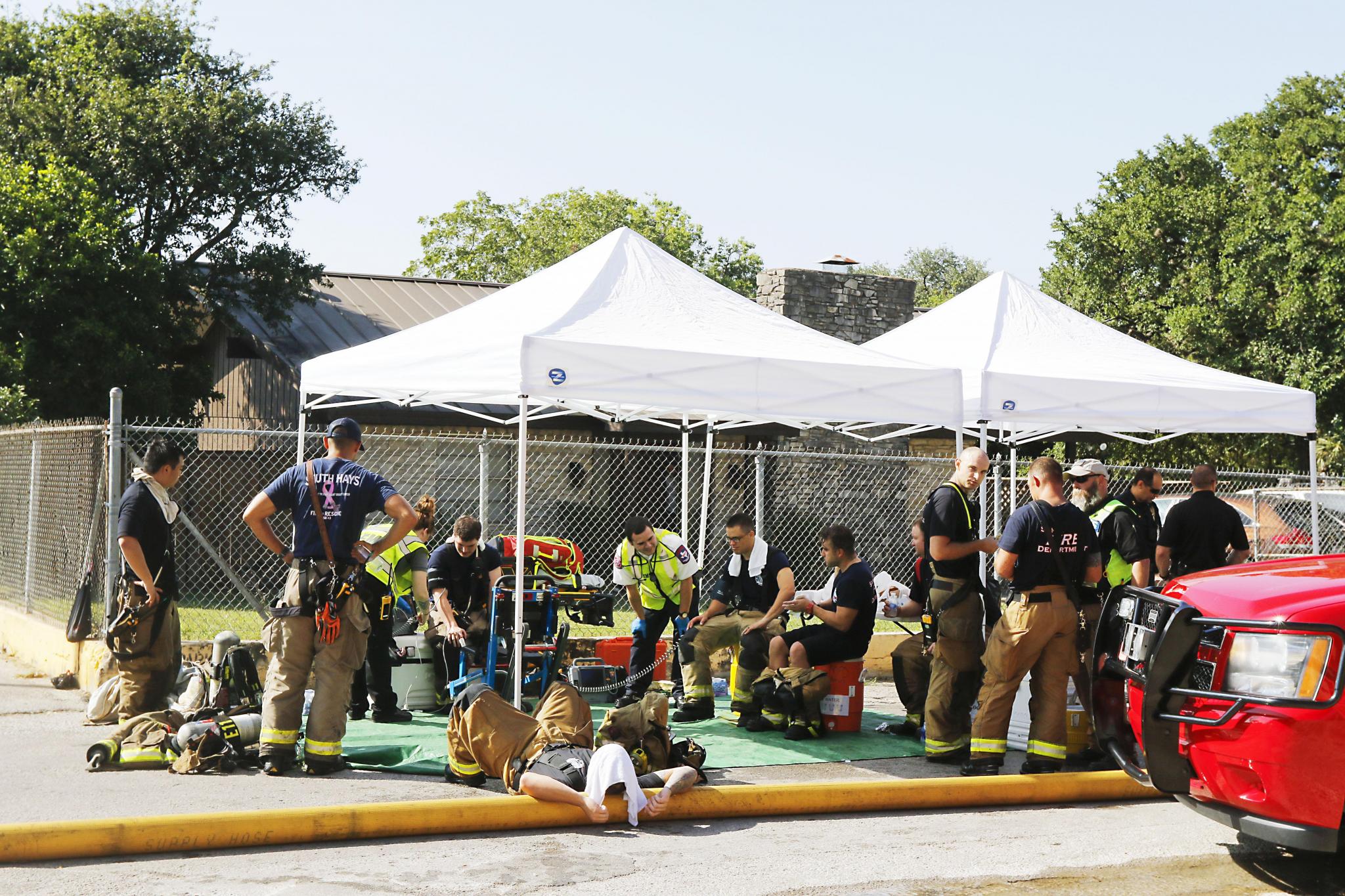 Robert Dallimore remembers driving to Houston for Haley Frizzell’s rosary service. He arrived with a bouquet of roses.

“When we walked in the door her grandfather was standing there,” Dallimore said before pausing as a flood of emotion overcame him. “He hugged us like we were family … We met her mom and her dad, and I can’t explain the feeling of that. They weren’t expecting us to show up. So, once they saw us, it was instant tears.”

“We knew it was going to be a big fire”

Daniel Robson, a 911 telecommunicator, calls 4 a.m. a slow time as a dispatcher in San Marcos.

On Friday, July 20, 2018, Robson recalls the dispatch team winding down from the bars closing in town. Robson’s colleague Louis Torres received the first call around 4:20 a.m. about a structure fire at Iconic Village. “The minute (Torres) was able to process it and turn it around, he said something to the effects of ‘structure fire, it’s a good one,’” he said.

Robson took the second call. He could hear screams in the background.

“I remember what I was hearing was she was just asking for help,” Robson said. “I really couldn’t get her to say anything else at the time except she said everybody needed help. She said, ‘There’s people jumping out of windows, second floor windows. There’s people climbing down from the second story. There’s people running everywhere.’”

Robson, Torres and another dispatcher answered phone calls that morning. As the other two on shift were dispatching fire and police units to the scene.

Dispatch quickly realized the magnitude of the fire. Robson’s roll as the chaos unfolded was to figure out who was injured at the scene, where they were and how they could get help to them.

“It became clear rather quickly the size of incident we were dealing with,” Robson said. “Based off the knowledge we had, we knew it was going to be a big fire.”

Dallimore drove his rig faster than usual that morning as dispatch said people were jumping out of the building. He and his crew could see the glow of the fire as he drove onto Sessom Drive. San Marcos Fire Battalion Chief Howie Minor said medics reported they could see the fire as far as Wonder World Dr. — Approximately three miles away.

“As we’re driving up LBJ (Drive) that’s something typically something we don’t see, like big fires,” Dallimore said. “We usually get there with maybe one to two room involvement, nothing to this magnitude. So, you know, we knew this was going to be a big one.”

Dallimore parked near one of three fire hydrants near Iconic Village. He and five others quickly began spraying water onto the inferno.

Dallimore described the scene as a warzone. People fleeing the blaze. Burning embers flying around going onto other buildings. Palm trees at the complex catching fire because of the radiant heat.

“It was one of those ones that you show up to and this is the big fire of my career,” Dallimore said. “You don’t know what situation you’re going to yourself in when arriving. You look at that and you’re like ‘I don’t know if I’m going to come home at the end of my shift’ when you arrive at something like that. Then you consider how many people’s lives are at stake. It’s a huge pill to swallow, a huge thing to chew on.”

Minor said 17 San Marcos firefighters were on duty that day. They received help from the Buda, Canyon Lake, Kyle, New Braunfels, Seguin and South Hays Fire Departments to extinguish the fire, which was put out by the evening.

As soon as San Marcos Fire Marshal Kelly Kistner arrived on scene, he knew there was no way the city could handle this investigation on its own.

The investigation began by trying to find witnesses, residents and locate everybody. At the end of that day, they had found all but five of the residents at Iconic Village.

The five missing were identified as Frizzell, Estes, Ortiz, Moats and Miranda. Their bodies were later recovered in the rubble.

From the day of the fire until Aug. 1, 2018,  it was nonstop for Kistner and the investigative team.

“We were digging,” Kistner said. “We had over 50 ATF agents that were on the ground. So, when Texas Task Force 1 was here, we had over an addition 100 people not including the fire department that were on the scene. It was a major undertaking.”

Kistner said it took until November to know that the fire was set intentionally, and on Nov. 29, 2018 the San Marcos Fire Department and ATF announced that information.

In mid-December, the five victims’ deaths were ruled homicides.

‘We’re going to find out who did it’

ATF is offering a reward up to $10,000 for any information leading to the arrest of the person, or persons, involved in the crime. Those with any information are asked to call 888-ATF-TIPS (283-8477).

Kistner said the fire department constantly receives new leads, and Minor even took one on Wednesday.

“I ran into a guy and provided something today that I forwarded to the fire marshall,” Minor said Wednesday. “But that’s the first time ever and how cool would that be if that’s a good one and it came to me. That would be awesome. The good news is (Kistner’s) got it and it’s something fresh.”

Kistner is confident they’ll be able to find the person, or persons, responsible for setting the fire.

“We’re going to find out who did it,” Kistner said. “We’re going to come out with an answer that’s the right answer on who did it. What that’s going to mean for us is we’ve done our job to bring closure to the families who lost these five young people, and that we were able to do our side of the justice system for the five victims that we will hopefully be able to bring some form of closure for the community.”