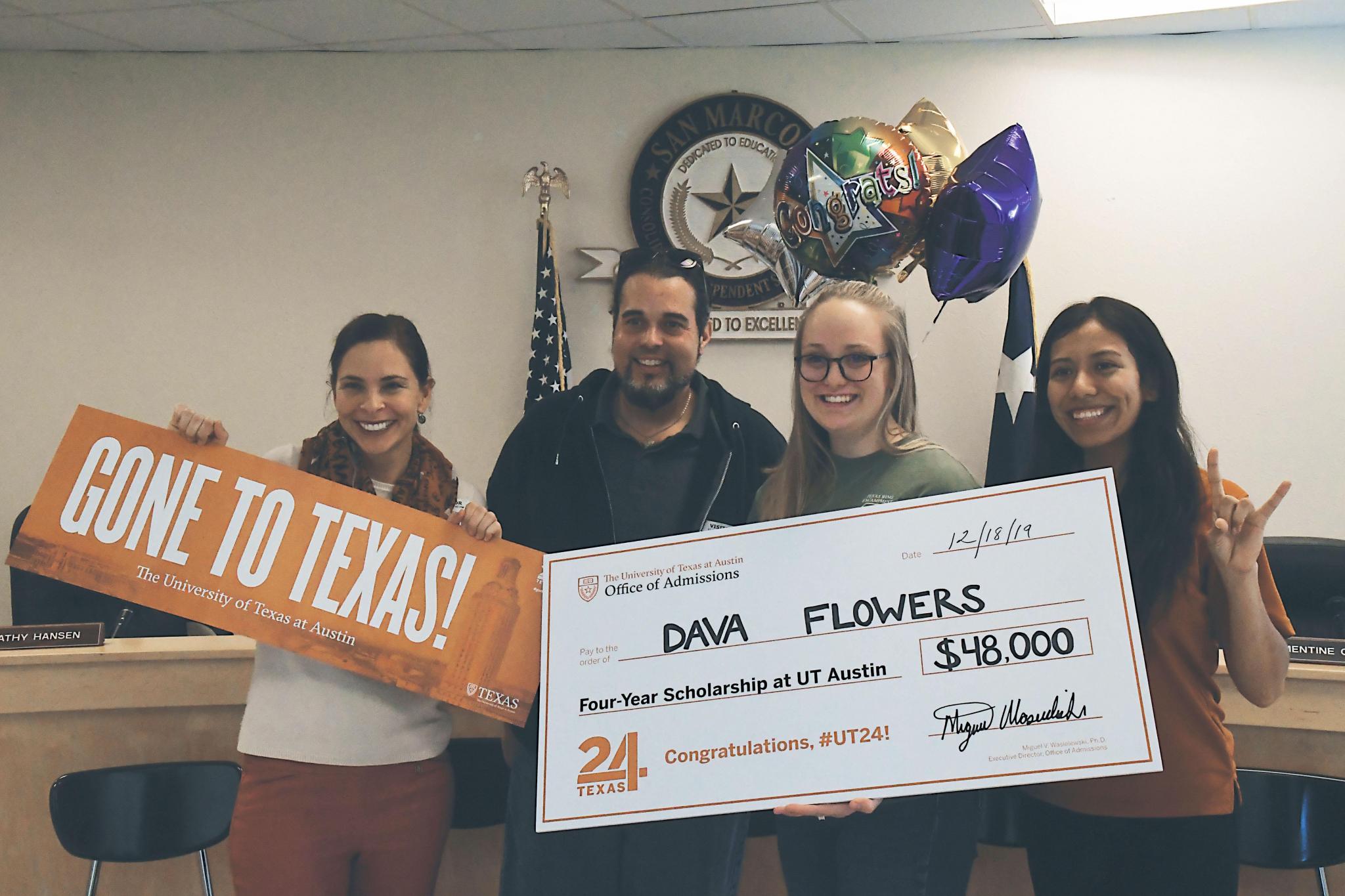 Flowers, 17, walked into the Criminal Justice Classroom inside San Marcos High School on Wednesday with her friends, family and members of the Office of Admissions at the University of Texas at Austin awaiting.

UT Austin Assistant Director of Admissions Caroline Enriquez informed Flowers that she had been accepted into the College of Liberal Arts’ Honors Program as well as the university’s Plan II Honors Program. Then, from behind a podium, Enriquez grabbed a check for $48,000 and handed it Flowers — she had been awarded one of UT’s Impact Scholarship.

Flowers called the award an honor and a great Christmas present.

“It’s an incredible honor, especially coming from a low-income household where I was worried about school and my main motivation for college was to get good grades so that I’d be able to pay for college,” Flowers said. “That’s one of my main motivations and studying this whole time and taking a bunch of AP (classes) and anything I’ve done is mostly to pay for college because I knew that that was important. I think it’s just an incredible honor to be blessed by this by UT.

Flowers is one of 60 students across the state to receive UT’s Impact Scholarship. According to the university, the scholarship was created to award students who make impacts within their community and covers the cost of four years of tuition — $12,000 per year.

Flowers has made her mark through her work with the Civil Air Patrol — a congressionally chartered, federally supported nonprofit corporation that act as an official civilian auxiliary of the U.S. Air Force. She said her participation in Civil Air Patrol has taught her how to serve people and her community.

“I know that the Impact Scholarship is about serving your community, so we do a lot of search and rescue operations, leadership training,” Flowers said. “As far a Civil Air Patrol goes, it’s been a second parent to me. It’s taught me a lot about dedication.”

“I’ve always know she’s gonna do good and be able to get into a college like UT,” David said. “But the advancement that she wanted and the honors programs that she wanted, this scholarship makes it possible.”

Flowers is graduating early from San Marcos High School. Her last day was Wednesday. She plans to enroll at UT in the fall of 2020, where she’ll major in government and plans to join the school’s ROTC program.