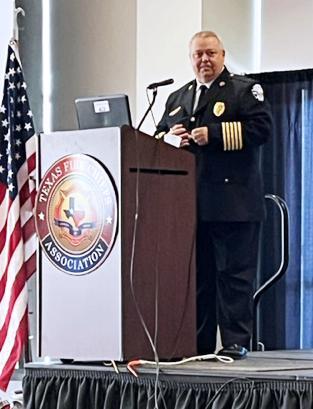 Above, San Marcos Fire Chief speaks to a crowd at the Texas Fire Chiefs Association annual conference on Wednesday after being named Fire Chief of the Year. Photos courtesy of City of San Marcos

Stephens, who was named San Marcos Fire Chief in 2009, received the honor at the fire chiefs association annual conference in Waco on Wednesday. He was honored for his outstanding performance within the Texas Fire Service after the association reviewed nearly two dozen letters of support submitted by city staff, elected officials and community members.

“Chief Stephens has revolutionized our fire protective services,” Director of Public Safety Chase Stapp said in a statement. “From the moment that he arrived in San Marcos, Chief Stephens set a higher standard for service, training, community involvement, transparency, and professionalism not only within the fire department, but throughout the City of San Marcos.” 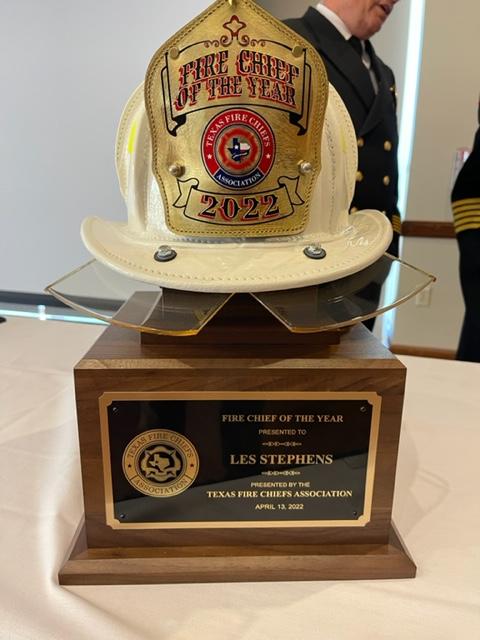 The city said among the letters of support submitted to the Texas Texas Fire Chiefs Association several referenced Stephens’ strong leadership and the compassion he offered to the victims of the Iconic Village apartment fire and their families.

“From the beginning to today, he has remained a resource to all of them and a friend to many of them,” said Kelly Kistner, former San Marcos Fire Marshal and current Fire Marshal for the City of Frisco. “He treated the parents and loved ones of the victims how he would want to be treated. He treated them with support, compassion, strength, and advocacy. To this day, the unsolved case is still one of his professional and personal priorities.”

Stephens holds multiple degrees and certifications, including a bachelor’s degree in Applied Arts and Sciences and Certified Public Manager credentials from Texas State University. He also has a Chief Fire Officer designation from the Center for Public Safety Excellence. Stephens is a member of the International Association of Fire Chiefs, the Hays County Fire Chiefs Association, and previously served as president of the Texas Fire Chiefs Association.