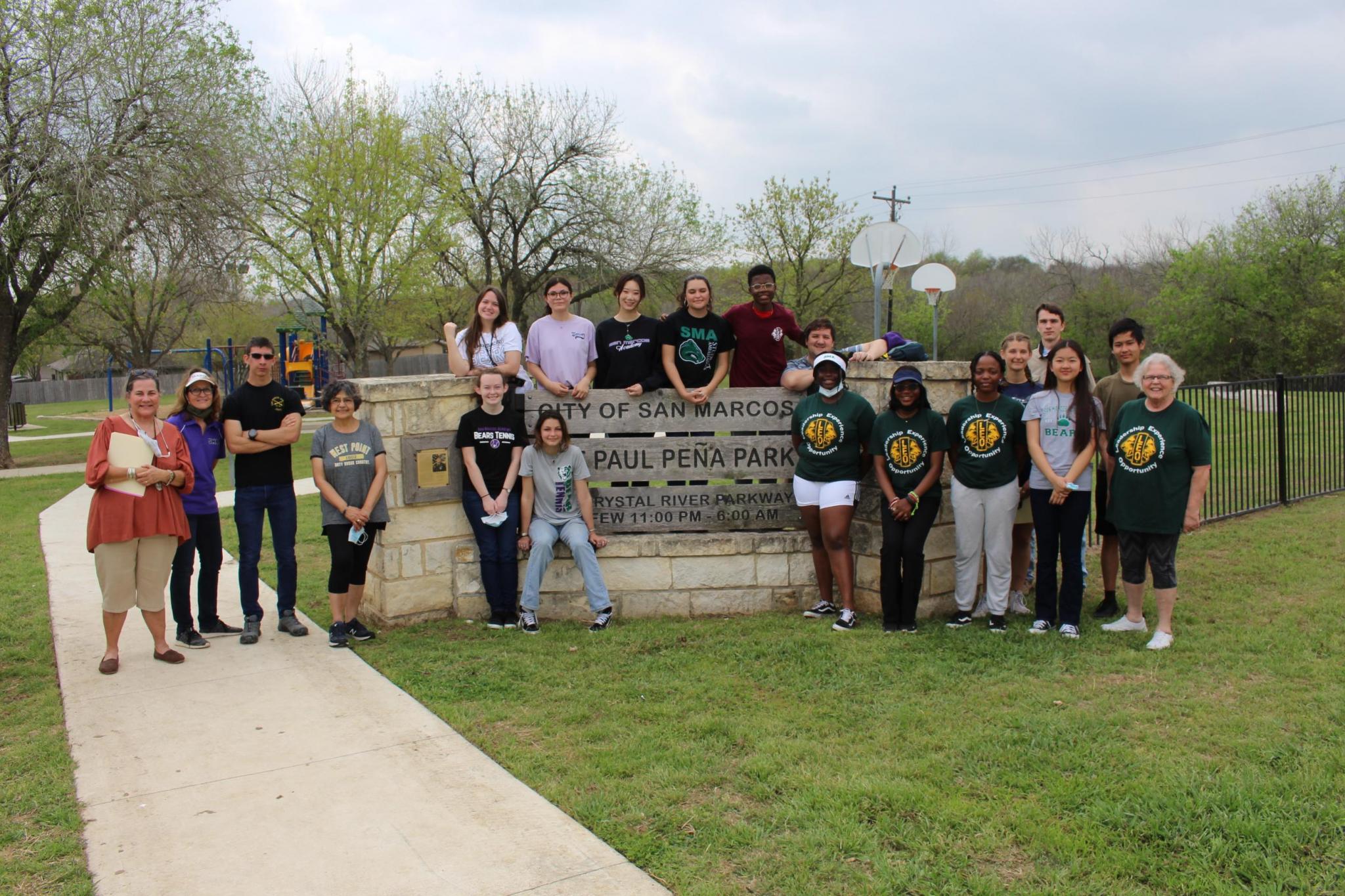 Joined by Mrs. Cecilia Peña (fourth from left), members and sponsors of several different organizations at San Marcos Academy gathered recently at Paul Peña Park, which they have adopted as a ongoing campus-wide service project. Photo by Larkin Smith

Members of several campus organizations at San Marcos Academy joined forces recently to “adopt” a local park that has a meaningful connection to the school.

Led by NHS President Victoria Polhemus, the student leaders arranged with the City of San Marcos to adopt CPT Paul Peña Park in the Hills of Hays subdivision on Crystal River Parkway. The park was named in memory of Paul Peña, who was killed in action in Afghanistan January 19, 2010. Peña was a 2000 graduate of San Marcos Academy and a 2004 graduate of the U.S. Military Academy at West Point.

For their initial visit, the students met at the park March 27 to familiarize themselves with the area and hand out fliers about their project to residents of the neighborhood. The fliers included an online survey to gather information about how residents currently use the park and how they would like to see it grow.

One of the neighborhood residents is Cecilia Peña, Paul’s mother, who showed her support by joining the SMA students for their day at the park. “It was so good to see all the students and adults helping with the project,” Mrs. Peña said. “I am truly excited about what can be done at the park.”

“One of my goals throughout my high school career has been to bring students from different organizations together to accomplish something long-lasting and impactful,” Polhemus said. “The park idea came about while discussing this topic at length with my English teacher, Mrs. Strauss. She had mentioned adopting a spot in San Marcos, so that night I googled ‘adopt a park’ and completed the necessary paperwork. The very next morning I had officially adopted the Paul Peña Park in San Marcos for SMA. I hope that all our members and I can inspire younger leaders to make improvements in their own community.”

Strauss, who sponsors the Junior State of America organization of which Polhemus is president, said she has watched Polhemus grow as a leader since her freshman year. “I’ve noticed her looking around, thinking about how to improve her community, and trying to do the hard legwork to get a project to happen,” Strauss said. “Adopting this park named after one of SMA's own servant leaders was her idea, and she has quietly spent hours organizing this kick off. Paul Peña was willing to be the ultimate servant, and he gave the ultimate sacrifice for his community and his country.  We should be willing to make our own sacrifices to serve this park named after him, and the community that raised him.”

Future goals for the project include beautifying the park through trash pick-ups and other maintenance; adding additional trees or landscaping to the park; adding additional new benches, and replacing worn benches, tables, and other equipment. The students will also look into the possibility of building a community garden.

“The focus for our club is service,” Mrs. Nancy Smith, sponsor of the Academy’s Leo Club said. “As the youth organization sponsored by our San Marcos Lions Club, our motto is also “we serve”; our leadership is excited to continue helping with the Peña Park project, involving our whole club membership; our Club leaders for next year will ensure that this happens.”