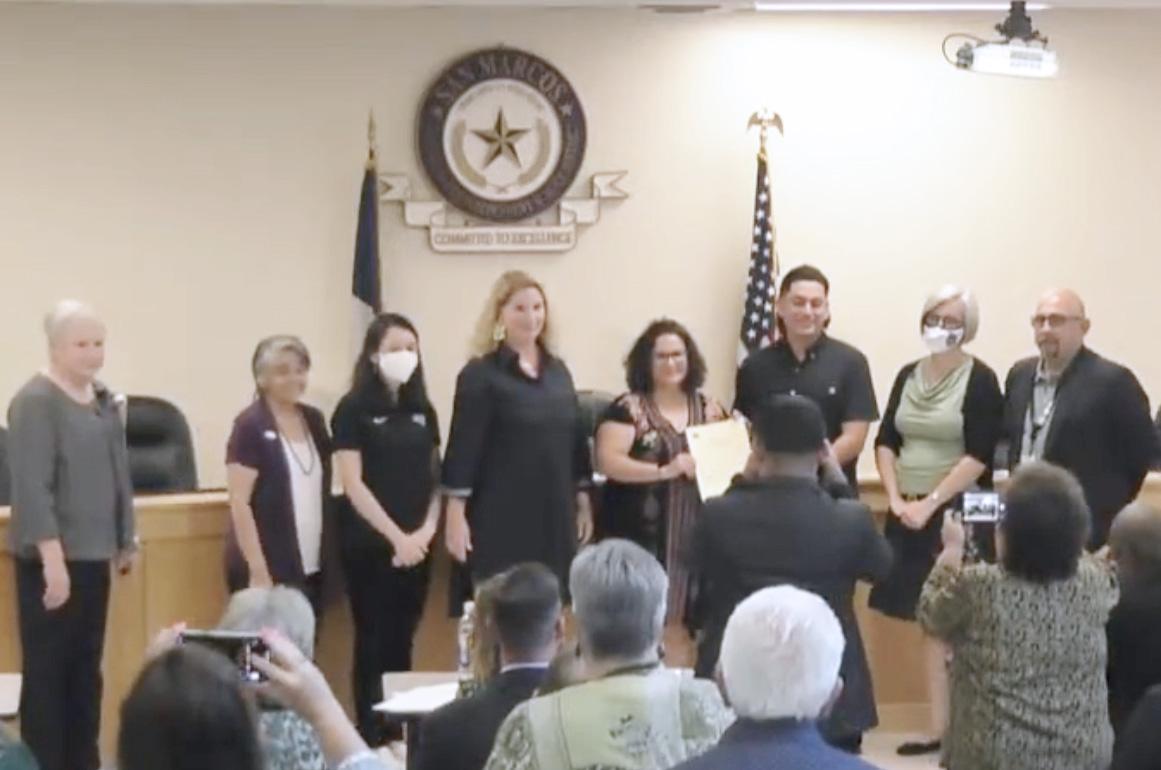 Above, members of the San Marcos Consolidated ISD Board of Trustees and Superintendent Dr. Michael Cardona present an honorary resolution recognizing Trustee Celestino Mendez, who died earlier this month, to his daughter. Screenshot via San Marcos CISD YouTube

Mendez, who died on May 8, was recognized for his work in the community and as a former member of the board of trustees during Monday’s regular board meeting.

“As many of you are aware, we lost a true pillar of the San Marcos community earlier this month and so on behalf of the San Marcos CISD Board of Trustees, we have the following resolution,” Trustee Miguel Arredondo said.

“Now therefore, be it resolved, that the Board of Trustees of the San Marcos Consolidated Independent School District hereby expresses its gratitude and appreciation to Celestino Mendez for his dedicated service as a devoted trustee to the District and for his valuable contributions to the District and to its mission of ensuring all San Marcos, Texas children have access to a quality education that enables them to achieve their full potential and fully participate now and in the future in the social, economic, and educational opportunities in Texas and the United States,” the resolution stated.

Mendez was born in 1930 and raised in the San Marcos area where he attended the historic Southside School, which was formerly known as the Mexican School. He served in the U.S. Air Force from 1950-53 during the Korean War. Mendez was the first Hispanic trustee elected to the SMCISD board.

“Mr. Mendez, as an elected public servant, courageously served the District and the San Marcos community to promote equality and better relationships between the community’s racial and ethnic groups,” the resolution stated. “Mr. Mendez’s commitment and dedication to the District was critical to the success of the San Marcos Consolidated ISD for all District students.”

During Monday’s meeting, the board also canvassed votes for the May 7 election. The District 5 election was canceled after incumbent Clementine Cantu ran unopposed. The District 4 race was between Brian K. Shanks and Gabrielle Moore. Shanks was elected to the school board after he  received 785 votes to Moore’s 771. Shanks was elected to the seat of former Trustee Kathy Hansen who chose not to seek reelection.

The trustees unanimously voted to accept the canvassed election.

Before Shanks was sworn into his position, the board thanked Hansen for her 15 years of work as a trustee and years of service to the district as a teacher and administrator.

“On behalf of the board and the district, in appreciation for your faithful service and your many years of commitment to all of our kids and teachers, all of our programs. Kathy is at football games, she sells tickets for booster clubs, she is there all of the time and her special dedication to our students in our special ed classes and our programs throughout the years, we have two little for you,” said Trustee Anne Halsey before presenting Hansen with a plaque and dedicated parking sign.

Shanks received his certificate of election and was sworn in after the votes were canvassed and took his seat on the dais. Cantu was unable to attend Monday’s meeting and will be sworn in during an upcoming SMCISD board meeting.