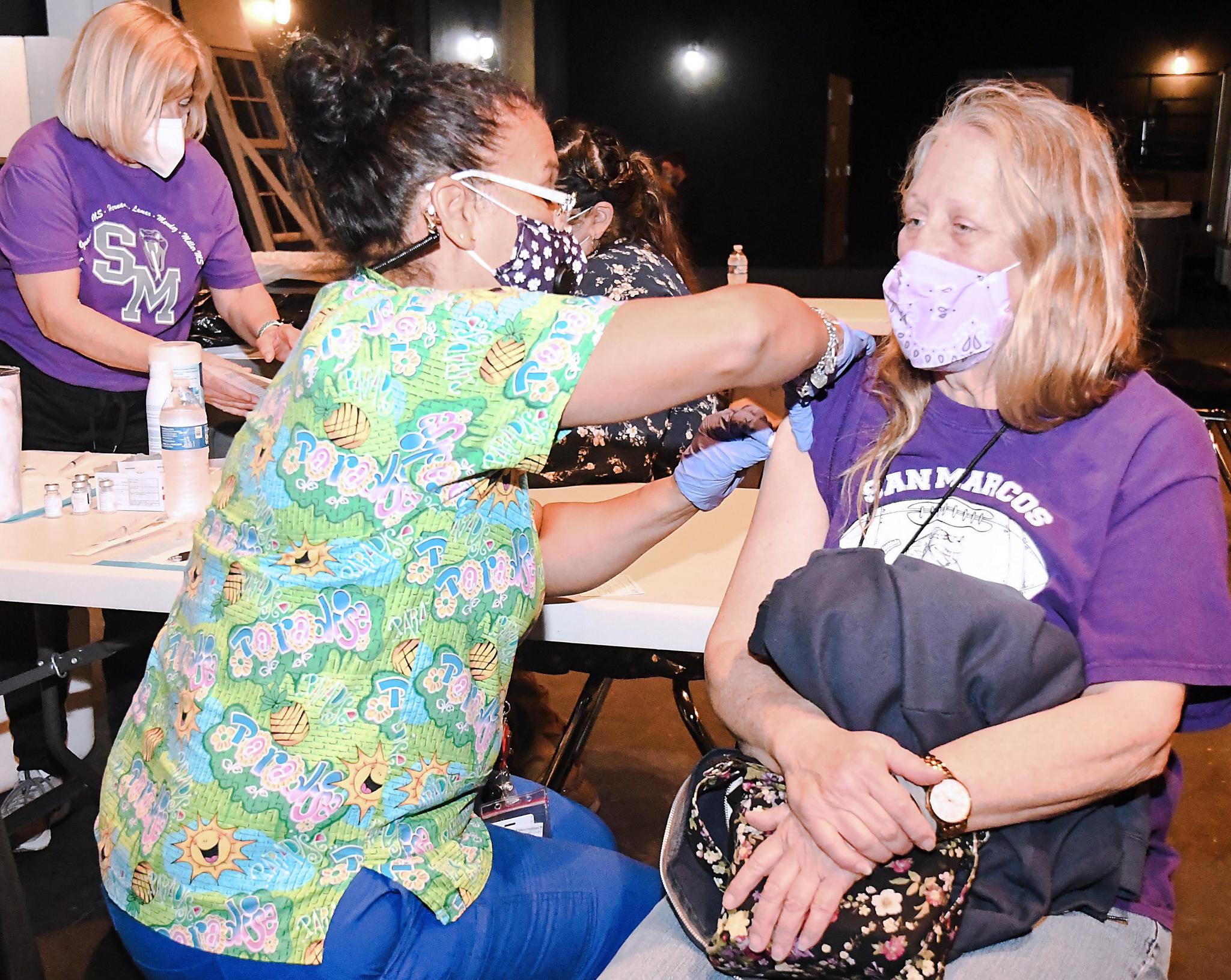 Thursday’s reaction was all the same as San Marcos Consolidated ISD teachers and staff walked into San Marcos High School’s Performing Arts Center to receive their first dose of the COVID-19 vaccine — relief.

“I’m thrilled,” said Dyanna Eastwood, who is the head nurse at San Marcos High School and administered shots Thursday. “My daughter is a teacher and I’m thrilled that they can get that now. They need to. We need these kids back in school and we need the teachers and the kids to feel comfortable being here. It’s just a huge step.”

SMCISD previously applied and was approved to be a vaccine provider through the Texas Department of Emergency Management, said Superintendent Michael Cardona. District Director of Transportation Doug Wozniak added that the district is working with the county to function as its own vaccination center.

SMCISD administered approximately 250 doses of Moderna’s COVID-19 vaccines Thursday and will administer an additional 250 on Friday to its teachers and staff. District officials scrambled Wednesday to create this week’s vaccine clinic after the Texas Department of State Health Services expanded vaccine eligibility to include school and child care workers.

“At first we were just going to do the (group) 1As and 1Bs but then we got the word yesterday from the state that said, ‘Hey, teachers are now free game if you will. No matter what category they fall into,’” Wozniak said. “So, we scrambled really quick (Wednesday) night.”

Prior to Wednesday’s announcement from the DSHS expanding eligibility, which came after the U.S. Department of Health and Human Services directed states to include school and child care workers, the state was only allowing those in groups 1A and 1B to receive a vaccine. Those in the qualifying groups included front-line healthcare workers and residents at long-term care facilities — and 1B, individuals 65 or older, or 16 or older with a health condition that increases risk of severe COVID‑19 illness.

Wozniak said the district had approximately 200-300 teachers who had already received a COVID-19 vaccine. But he believes the newly acquired doses will allow the district to vaccinate those who need to be vaccinated. “This 500 we’re hoping puts us to the finish line,” Wozniak said.

“I’ve gotten a lot of emails from teachers and they just say how appreciative they are that we’re working behind the scenes to try to help them,” Wozniak said. “Obviously, there’s a lot of anxiety being in the classroom. And although the numbers have dropped a little bit here in the county in the last month or so, they still understand that there are variants out there. As a state, we’ve started to go up a little bit this last week. So, we’re starting to elevate again so that’s not a great situation. So, they’re understandably anxious but now they’ve got a little bit of a peace of mind.”

As teachers are able to be vaccinated, Wozniak said he hopes the district can expand its vaccine operations to help administer shots to Hays County residents.

“It’s just a matter of logistically since it’s during the school day,” Wozniak said. “Can we spare a couple nurses? Can we get some help because the county is stretched thin and they’re looking for help. That’s kind of our goal is to satisfy everybody.”

Thursday’s clinic was all conducted with SMCISD volunteers — a group of 30-40 staff members, and students with the district’s nursing and EMT programs. District officials thanked county Emergency Services Office Director Mike Jones and staff at the Hays County Local Health Department for their help to create this week’s clinic.

Cardona said seeing SMCISD teachers and staff receive shots in their arms provides a “little bit of light through the dark forest.”

“I think it just shows that we all care about our staff members,” Cardona said. “When we have the chance, we’re going to take care of them.”