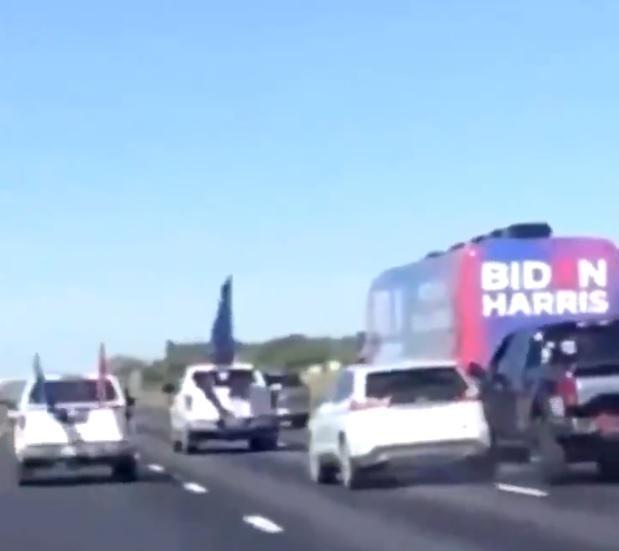 An auto accident occurred Friday afternoon on northbound Interstate 35 between a white SUV following a Biden campaign bus and a black truck that was a part of "Trump Train" following behind. SMPD stated further investigation is needed to determine who is at fault. Screenshot from Twitter

The San Marcos Police Department is working in cooperation with the Federal Bureau of Investigation after an incident occurred between a Biden campaign bus and a “Trump Train.”

An accident happened between an SUV following the bus and a black truck that was a part of a group of Trump supporters Friday afternoon on northbound Interstate 35 near Exit 210 in San Marcos. Viral videos posted on Twitter show the two vehicles colliding. SMPD said further investigation was needed to determine who was at fault.

“Available video footage makes it appear as though the at-fault vehicle may be the white SUV and the victim appears to be the black truck as supported by a Kyle Police report,” SMPD said in a statement. “Since the crash occurred in SMPD jurisdiction, both drivers were instructed to contact SMPD to file their report and the driver of the black truck did contact SMPD on Saturday and received instruction on filling out a crash report.”

The Biden bus was scheduled to make a stop in San Marcos on Friday as the Democratic ticket ramped up efforts to flip the state as multiple outlets, including NBC News and Cook Political Report, moved the race from lean-Republican to a toss-up. According to the FiveThirtyEight, Trump holds a one-point advantage in Texas heading into Election Day after winning the state by nine points in 2016.

The San Marcos event was scheduled for 4 p.m. Friday but it was canceled.

The procession of the Biden Harris Bus and Trump supporter vehicles passed through New Braunfels on its way north to San Marcos.

SMPD said it received a call from members on the bus requesting assistance but were unable to catch up because of traffic.

“On Friday afternoon, SMPD received a call from the Biden Harris bus as they were traveling on (I-35) to request a police escort through San Marcos and three officers responded forthwith,” SMPD said. “However, due to the excessive amount of traffic they were not able to catch up to the bus before it exited our jurisdiction.”

Hays County Commissioner Pct. 3 Candidate Lisa Prewitt said she called San Marcos Public Safety Director Chase Stapp at 12:15 p.m. on Thursday and again with a status update at 3:15 p.m. on Friday behalf of the Biden Campaign to alert law enforcement of their travels and to express concerns about safety.

“We have got to try to diffuse the anger (before Election Day),” Prewitt said. “Those of us that have a platform need to use it to try to deescalate now. Law enforcement has an important role in ensuring free and safe elections. I can only hope residents can feel safe exercising their right to vote and I hope candidates can feel safe making final appeals to voters. We have always come together as a people and a nation even in some of the most difficult times. I hope we can uphold that tomorrow.”

A City of San Marcos spokesperson stated that it planned to have officers at the campaign event but did not receive a request for assistance to escort campaign vehicles.

When asked about the intention of the "Trump Train," Narvaiz said, “Our intent was to show support to our President and with that support comes a rejection of the policies and leftist ideals that the democrats embrace. Those kind of policies and values have no place in a state that supports traditional Texas values of pro-God, pro-life and pro-freedom.”

President Donald Trump expressed his support of the “Trump Train” in a Tweet posted Saturday night: “I LOVE TEXAS.”

The FBI announced Sunday afternoon that it was aware of the bus incident and was investigating. Following the announcement, Trump tweeted, “In my opinion, these patriots did nothing wrong. Instead, the FBI & Justice should be investigating the terrorists, anarchists and agitators of ANTIFA, who run around burning down our Democrat run cities and hurting our people!”

After canceling the San Marcos stop, the Biden bus continued to an event in Austin scheduled with Rep. Lloyd Doggett (D-Texas) and Austin Mayor Steve Adler.

Doggett described the “Trump Train’s” actions as “aggressive, abusive conduct by his supporters results from Trump continuing to incite acts of intimidation and violence.”

“As Republican lawyers use Republican-dominated courts to diminish voting, this is only another, more outrageous form of voter suppression,” Doggett said in a statement. “Those who fear their party is about to lose Texas resort to such desperate tactics. We have to stand up to these bullies just as we seek to protect the right of every last Texan to vote out the Bully-in-Chief.”

Hays County Judge Ruben Becerra said Monday that he urges the FBI to investigate the “non-response by the Hays County Sheriff’s Office, Constable’s Office and San Marcos Police Department amid the dangerous highway harassment of the Biden-Harris bus.”

The sheriff’s office stated that it was not working the case as it fell in SMPD’s jurisdiction.

SMPD said it is working to provide the FBI with the information pertaining to their investigation.