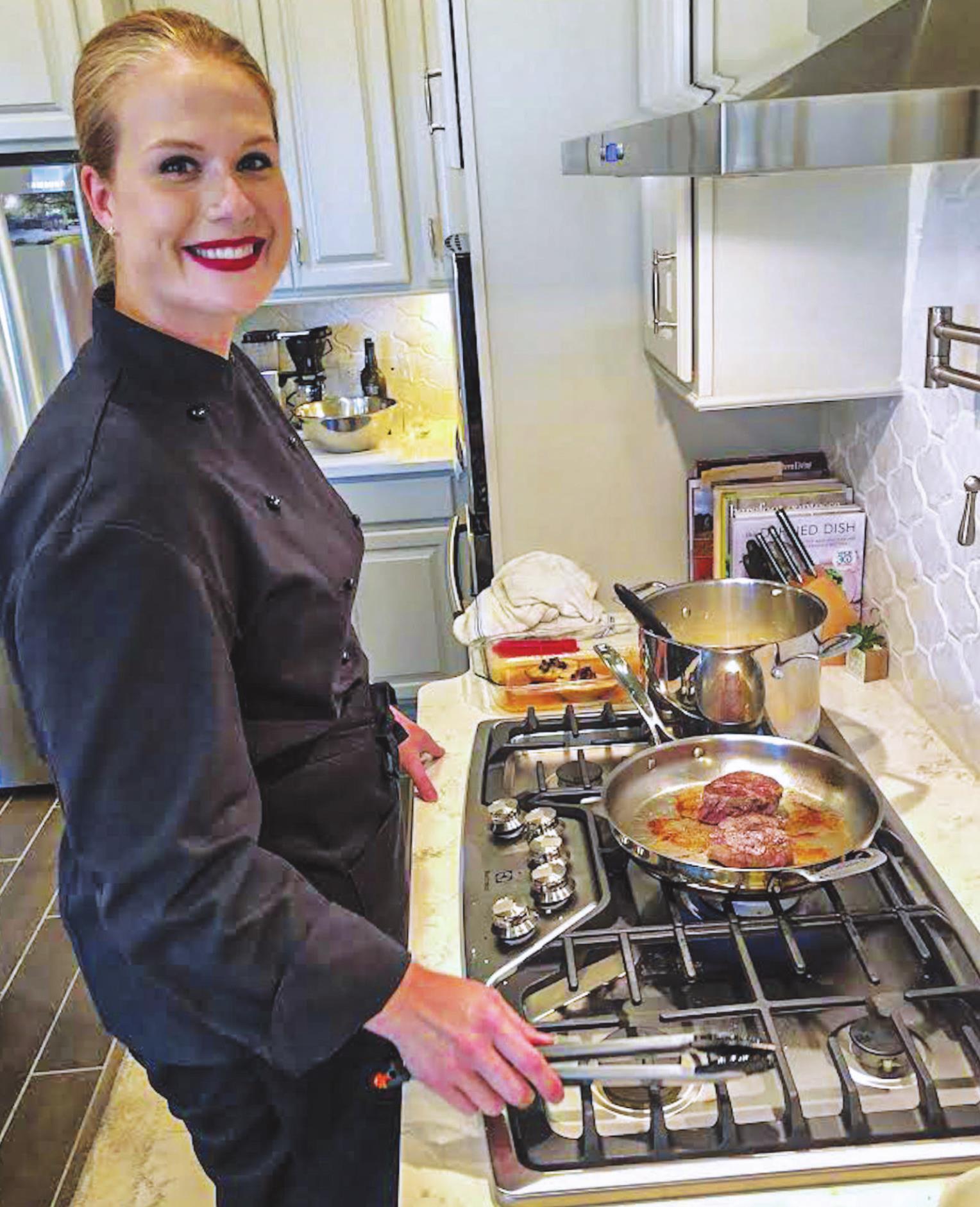 Above, Ashley Casebier — personal chef and owner of Southern with a French Twist — cooks a meal during a recent dinner gathering.

Ask almost anyone who loves to cook, and they’ll tell you the fondest memories are made gathered around the dinner table.

“It’s a therapy; a heart-to-heart therapy that happens at the table,” said Ashley Casebier, personal chef and owner of Southern with a French Twist. “When I'm throwing a dinner gathering and I'm seeing that happen, I love it. I really want you to walk away not only feeling nourished, but that you feel you’ve made a connection that day.” 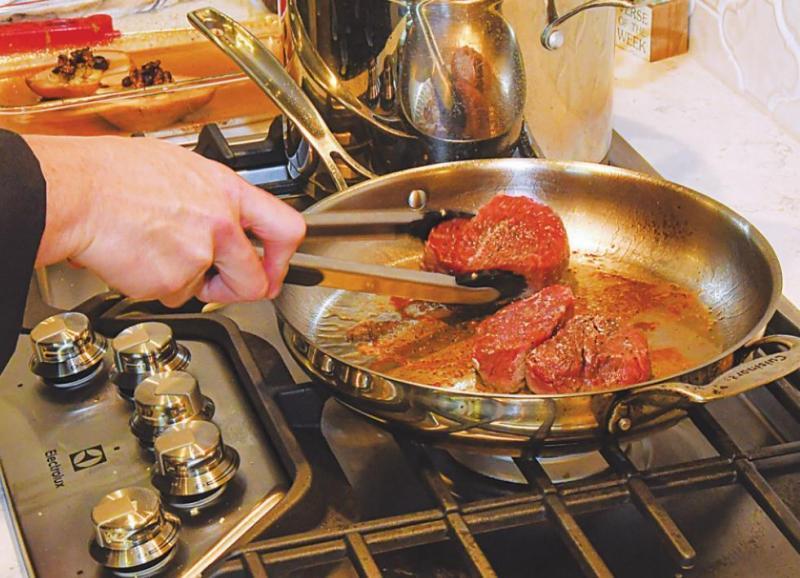 Prepping for a change

Ashley thought she knew what she wanted in a career. She attended the University of Louisville in Kentucky where she graduated with a degree in business and marketing.

It wasn’t long before she found herself in Texas, and over the next 10 years she worked at a finance and insurance company, later a tech start-up, and then joined retail grocery giant, Whole Foods.

“I was a technical program manager. I managed the execution of corporate initiatives for their global perishables logistics business systems,” she said. “Whole Foods is responsible for billions of dollars of perishables. I managed the big project execution piece of it for all those initiatives. Then I moved over to timekeeping and scheduling, right as COVID hit.”

She worked for the Austin-based company a little longer but always seemed to have a nagging desire to be more creative.

“I remember thinking I didn’t want to manage the project, I wanted to create them,” she said.

It was then when she realized her love for cooking and passion for creating were on a four-course collision in 2019.

“I wanted to go to a culinary school for as long as I can remember so I just started researching culinary schools and found Escoffier's online program,” she said. “I researched the heck out of it, saw what other chefs were saying about it and their experiences and decided to do it.”

The program allowed Ashley to work full time and fulfill her dream of going to culinary school.

“It was an opportunity for me to gain experience, but the reason I picked the school was because of its culinary entrepreneurship focused program,” she said. “They taught the culinary arts ‘ins and outs’ from the business side. I felt like I understood basic business structure in general from going to business school but liked that it was specifically culinary focused.”

Ashley pursued her passion for about a year when her school started to come to an end and in the middle of a global pandemic no less.

“I just thought life is so precious,” she said. “For me 2020 is just such a wakeup call. I stopped commuting into Austin, and I got like three hours of my day back. I got to rest and catch up — and catch up with myself and what I wanted to do.”

She wanted to be a chef. So, she began researching and came to the decision to be a personal chef.

“It was like the day that I said it out loud things just started rapidly moving,” Ashley said. “I found a commercial kitchen in San Marcos. It was just wild.”

Since that moment Ashley has never looked back and doesn’t regret leaving a job that bore unbearable stress.

“There was nothing about my previous job, other than just human interaction, that interested me. I'm not even a technical person, but I was a people person — on the tech side,” she said with a smile.

“It wasn't enough anymore, and I was under such extreme stress. I was good at my job, and I achieved and received awards. So, I thought why not take that same work ethic and put it towards something that I love; and then I jumped. My faith is behind it; I do think this is what I was created to do.”

She said it was scary to take that jump but had she hung on to the security of a corporate job long enough.

“I clung to that corporate job for so long thinking it was what I was supposed to do,” she said. “It wasn’t until I completely let go of that security that the coolest things entered my life I would otherwise have missed. This is like the biggest dream of my life, this business, and being able to do this.”

Ingredients in the name

“I've owned my domain, Southern with a French Twist, for about 10 years. I describe myself that way — as somebody Southern with a bit of a French twist,” she said. “It stuck with me, so I bought the domain and held on to it knowing one day I’d use it but didn’t have any idea how.”

She said she loved the name; it was her as a person but it's also how I felt about coming to the table.

One of her most popular dishes — the “I want it again” — when it hits her prepared meal menu is a grilled hoisin pork chop with a pineapple, red onion salsa.

“Most people are really looking for help with their lifestyle. It's easy to fall into comfort food, but a lot of my customers are looking for healthy options and it might just be something as simple as eating more vegetables,” Ashley said. “So, that's usually what I'm looking at for my prepared meal service. I have families that want their kids to know about all different kinds of foods. We make sure that there's something interesting each week for them to try.”

Operating any business during a global pandemic certainly has its challenges but starting a business in one presents a whole new challenge — sort of.

“I think sometimes constraints, like the pandemic, almost work for you because it tells you what you must work with. When you have no constraints, you're just picking, whatever might work,” Ashley said of her experience. “I think the hardest thing for me in this business was transitioning from being a massive planner to going to basically a startup.”

She said obviously getting your name out has been a challenge, but to be a chef in this time is, if you own a restaurant, it's been devastating.

“As a personal chef, for me, it's been awesome because the restaurant world has changed. The at home dinner party right now is the new going out to eat, and people are stuck at home with their kids cooking every single meal,” Ashley said. “So, a chef showing up for the prepared meal service has been a blessing to them, but also an opportunity for me. So, I have a prepared meal service, which is completely customized prepared meals delivered to the client, each week, or every other week in some cases.”

A prospective client will take a food survey which lets Ashley know everything they like, dislike and what their eating philosophy is. Then she customizes and creates a meal service for them. Each service, which is usually weekly, is three meals for her average customer.

“I then come up with something each week that’s different, “she said. “They rarely get the same thing.”

Rising into the future

“So, my mission is to help people prioritize gathering around the table. I make sure that all my services are aligned with that,” Ashley added. “I would love to have my own place someday where I could do supper clubs perhaps once a month. I would like to expand my current services, customer wise, but I want to make sure that each service or each event has several people at the table with you.”

Ashley's most passionate about her private dinner party service.

“Helping people gather in their own home at their own tables making meaningful connections helps me put my head on the pillow at night and rest soundly,” she said. “That is work worth doing.”

Lauren Tuttle loved her experience with Southern with a French Twist. 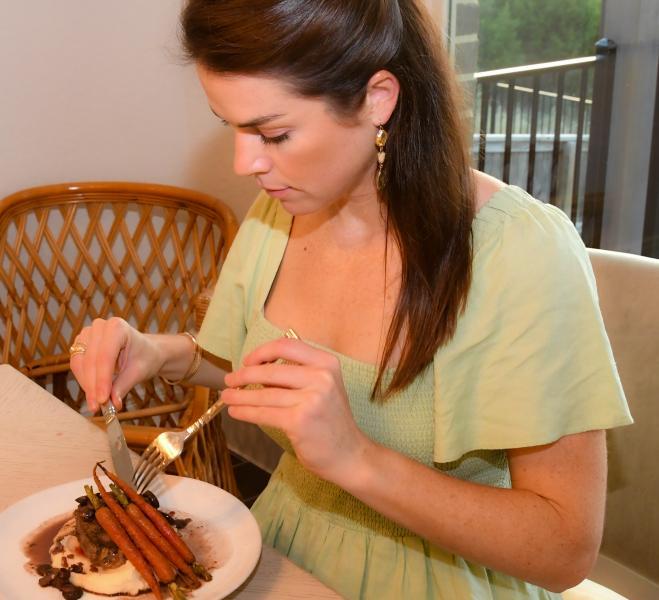 “I was so at ease when I walked into my kitchen after work and saw Ashley, and her warm smile, preparing dinner in my kitchen,” Lauren said. “Instead of having to gear up to head out to a restaurant after a long day, I was able to relax with my friends over a glass of champagne as we observed Ashley effortlessly create our coursed-out supper in my kitchen. Learning about Ashley's journey in pursuing her passion of cooking and gathering people at a table was inspiring.”

Ashley said one of the things she thought about — being a personal chef — was recalling the meaningful things in her life, important to her.

“I have the best memories, when it was around people at the table sharing something I was going through, and realizing I wasn't alone,” she added.

Whether it be a breakup, or something at work, or a friend she was having trouble with, Ashley said there would always be somebody else at the table.

“At 36 I had the feeling that I had lost a lot of time,” she said. “The best years of building your career, I thought, were your 20s and 30s. However, I see almost every day how my previous life plays into my current life.

I’m saying that because it wasn't for a loss. There are things that I do in the kitchen that somehow will tie back to sitting at my desk working with programmers. Whether it's the way I think about something, or like literally something I need to do to my own website, I pull from it constantly. So, it's not for loss.”