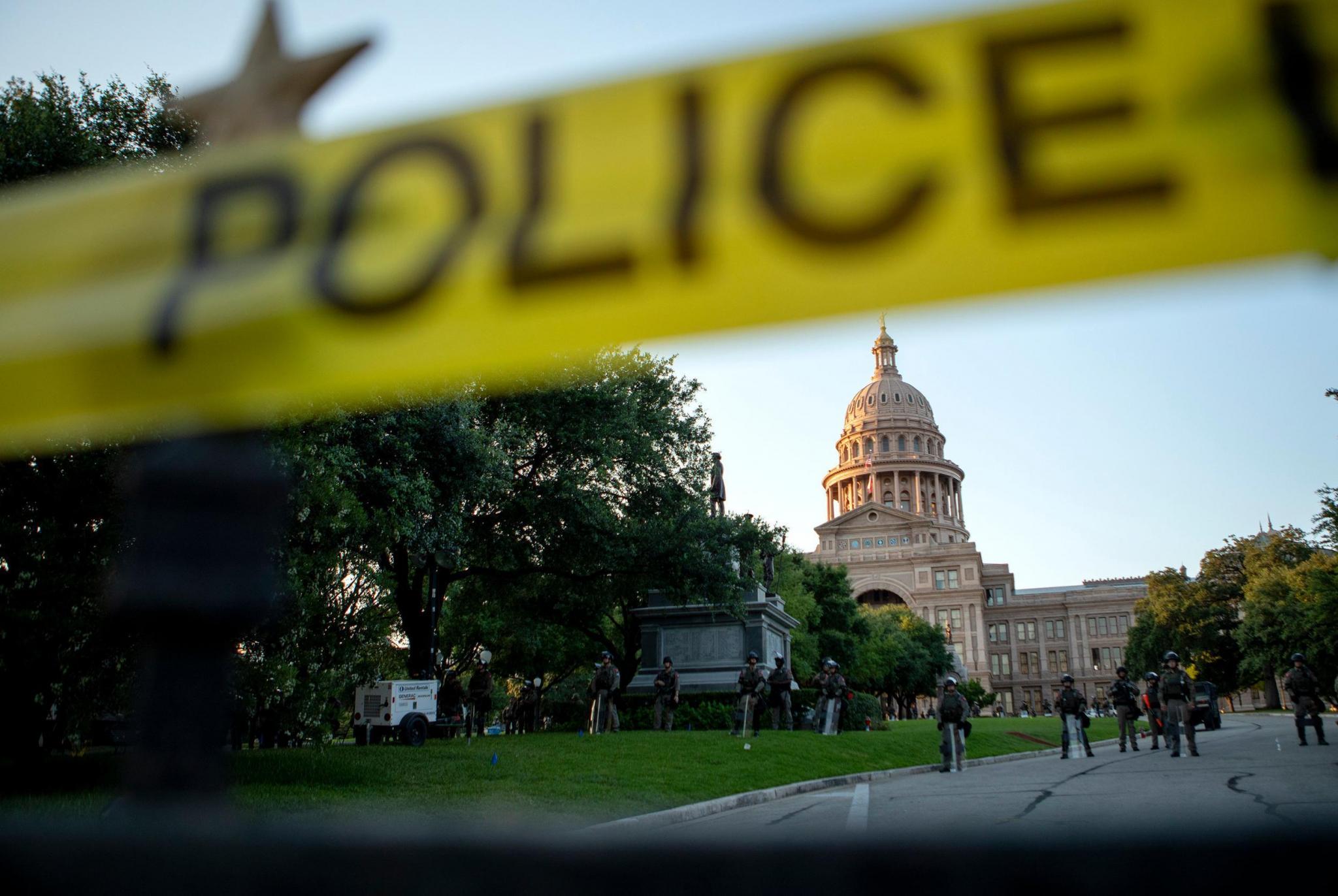 State troopers stand guard at the state Capitol grounds to prevent protesters from entering during a protest over the death of George Floyd. Credit: Miguel Gutierrez Jr./The Texas Tribune

This article is co-published with ProPublica, a nonprofit newsroom that investigates abuses of power. Sign up for ProPublica’s Big Story newsletter to receive stories like this one in your inbox as soon as they are published.

It was also produced in partnership with NBC News.

The Texas House on Thursday quickly gave preliminary approval to three police reform measures that are part of a sweeping set of legislation following the in-custody murder of George Floyd last year.

State Rep. Senfronia Thompson, lead author of the bills and the omnibus George Floyd Act, said the disciplinary measure was about fairness and accountability.

“The bill is by no means a cookie cutter process,” said Thompson, D-Houston. “Every case of officers’ misconduct is different. But so are other crimes in this state.”

The approved measures will head to the more conservative Senate after a final vote in the House. The upper chamber has also passed targeted pieces of Texas’ George Floyd Act — though only those that are also supported by police unions. The measure on officer discipline is strongly opposed by major police unions.

Last week, the state Senate unanimously approved two bills to require officers to intervene if another is using illegal force and instruct officers to provide first aid and call ambulances for injured people. On Wednesday, the upper chamber passed a bill to restrict police chokeholds.

“We need to continue to pass legislation that reforms how all police officers operate, not just bad apples,” state Sen. Borris Miles, D-Houston, said on the Senate floor Wednesday.

Floyd, a Black man from Houston, was killed last May in Minneapolis when former officer Derek Chauvin knelt on his neck long past the point of Floyd losing consciousness. The death, captured by a bystander on video, sparked uprisings across the country against police brutality and racial injustice. Since then, lawmakers in Congress and in state legislatures have pushed for policing reforms in Floyd’s name.

Texas’ George Floyd Act was announced by the Texas Legislative Black Caucus before the current legislative session. The omnibus bill includes the six standalone pieces that have since passed either the House or Senate, but it also would require agencies to adopt use of force policies that emphasized deescalation and take away police officers’ qualified immunity, a legal shield from state civil rights lawsuits.

The Floyd Act itself has stalled in committee, along with standalone bills on those two provisions. And it’s unclear how the separate measures passed by each the House and Senate will fare in the other chamber.

But after Chauvin was found guilty of murder last week, police reform activists felt a shift away from stagnation. Two days later, the Senate passed its first two pieces of the George Floyd Act.

On Thursday, the House first gave preliminary approval to House Bill 829 regarding officer discipline. HB 829 would require law enforcement agencies to adopt a set schedule of disciplinary actions to impose on officers based on the current wrongdoing and the officer’s prior record of misconduct. The actions would range from written warnings to firings.

Notably, police union agreements would not be able to supersede any disciplinary action that stemmed from an adopted schedule. And in appeals, where fired officers are often reinstated, action taken under the disciplinary schedules would be required to be found reasonable. The Combined Law Enforcement Associations of Texas, a major police union in the state, passed out opposition memos in the Capitol before Thursday saying a discipline is “not a cookie cutter process” and that a set schedule is “problematic at best.”

In San Antonio, an officer was reinstated after being fired in 2016 for allegedly giving a homeless man a sandwich filled with feces. In appeals, the arbiter found the chief’s dismissal was too late, since the union contract requires officer discipline to occur within 180 days of an incident. Another San Antonio officer who was fired in 2019 for repeatedly calling a handcuffed Black man the n-word was also reinstated in appeals because the arbiter did not believe there was convincing evidence that the officer was racist.

A 2017 Washington Post investigation found that since 2006, 70% of fired San Antonio police officers were rehired.

The second provision preliminarily OK'd Thursday, House Bill 830, is a leftover piece of the 2017 Legislature’s Sandra Bland Act, named for the woman who died in an apparent jail suicide after a traffic stop for failure to signal a lane change resulted in a violent arrest. The bill as passed would limit officers’ ability to arrest people for traffic offenses that at most would result in a fine.

Police officials have often cited the ability to arrest people for crimes that can’t result in jail time as a necessary but rarely used tool. But recently collected statewide data on traffic stops shows Texas police arrested people nearly 45,000 times last year for traffic violations. That’s down from about 58,500 arrests in 2019.

Dillon Puente was one of those arrested. Last August, he was stopped for making an improperly wide right turn in Keller and arrested for the charge. The case gained national attention because Puente’s father, who was driving a car behind Puente, was pepper-sprayed twice for recording the interaction. The family ultimately agreed to a $200,000 settlement of a lawsuit alleging civil rights violations and police brutality.

The final piece of the George Floyd Act that received preliminary approval by the House Thursday was House Bill 834. The bill would require that undercover officer testimony in drug cases require corroboration. The topic rose to prominence after a botched and deadly Houston drug raid in 2019. The undercover officer, Gerald Goines, has since been fired and charged with murder after he allegedly lied about witnessing a confidential informant buy drugs from the home, prompting the raid.

Since then, the Harris County District Attorney’s Office has reopened investigations into thousands of cases tied to Goines, including a low-level drug conviction against Floyd. In 2004, Floyd pleaded guilty after Goines arrested him after he said Floyd had sold a small amount of crack cocaine. Prosecutors this week supported a posthumous pardon for Floyd.

Also on Thursday, the House was slated to vote on a bill that would financially penalize cities with populations larger than 250,000 from cutting their police budgets., House Bill 1900. But state Rep. Ron Reynolds, D-Missouri City, challenged holding the vote on a legislative technicality and it was sent back to committee. The bill would allow the state to appropriate part of a city’s sales taxes and use that money to pay expenses for the Department of Public Safety. Cities that defund police agencies would also be banned from increasing property taxes or utility rates, which could have been used to compensate for the reapportioned sales taxes.

Juan Pablo Garnham and Shannon Najmabadi contributed to this story.

This article originally appeared in The Texsa Tribune at https://www.texastribune.org/2021/04/29/texas-police-reform-legislation/.