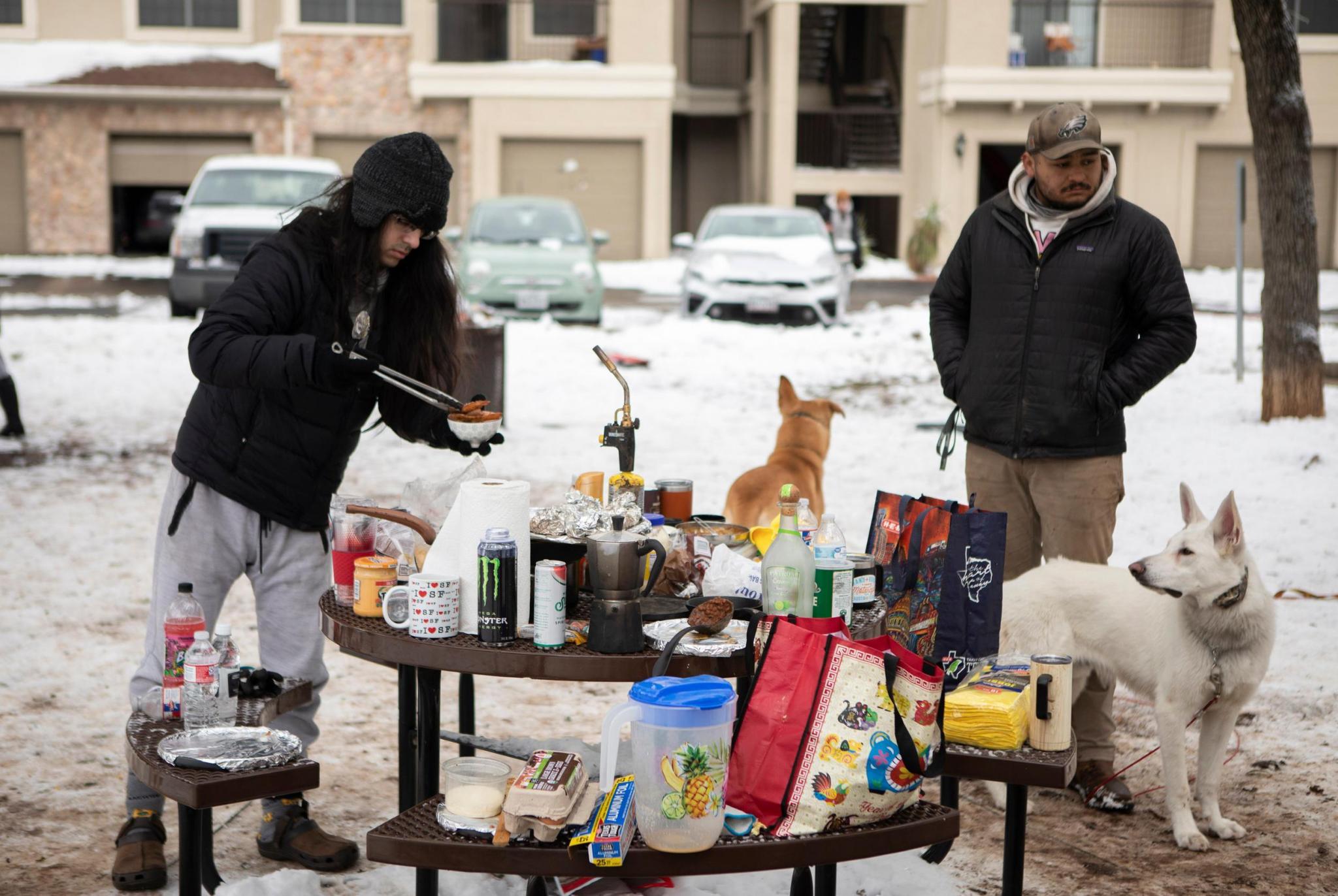 Residents of an apartment building in South Austin ate their meals Thursday in the parking lot after losing power. Their unit lost power after a nearby fire. Credit: Miguel Gutierrez Jr./The Texas Tribune

As Texas faced record-low temperatures this February and snow and ice made roads impassable, the state’s electric grid operator lost control of the power supply, leaving millions without access to electricity. As the blackouts extended from hours to days, top state lawmakers called for investigations into the Electric Reliability Council of Texas, and Texans demanded accountability for the disaster. We have compiled a list of resources for Texans who are seeking help, or places to get warm.

Here's what you need to know:

The state's electric system now has enough generation to return to normal operating conditions and no additional power outages were needed overnight to balance supply and demand, according to officials with the entity that operates the grid.

"There is enough generation on the electric system to allow us to begin to return to more normal operating conditions," said Senior Director of System Operations Dan Woodfin for Electric Reliability Council of Texas. ERCOT officials also said it's still necessary for people to conserve energy.

Those who are still without power are those in areas where the distribution system was damaged by the ice storm, areas where power needs to be restored manually and large industrial facilities who voluntarily went offline to conserve energy.

Texans of color, college students and hospital workers were left to struggle through winter storm

Texans of color earning low incomes bore some of the heaviest weight of this week’s power outages as the inequities drawn into the state’s urban centers were exacerbated in crisis. Some residents escaped to nearby hotels, but those who could never afford that option watched the food in their refrigerators — and the precious dollars spent on it — spoil in front of them.

“When you didn’t invest in the whole community equally, then you're going to see the disparity when we get into situations like this,” said Jill Ramirez, the CEO of the Latino HealthCare Forum.

Meanwhile, Texas universities have tried to provide students with food and shelter and open warming centers in campus buildings. But many are battling dwindling food supplies, staffing shortages, and lack of water and power outages.

Power and water outages have also hit many Texas prisons and jails. Inmates suffered from unheated cells and correction officers were kept at the units for days without going home. — Texas Tribune staff

Hundreds of thousands still without electricity, even as power grid stabilizes

Hundreds of thousands of Texas electricity customers were still without power Thursday, even though the state was generating enough energy that it didn't have to force electricity providers to cut power at people's homes. In addition, millions of people across the state have had their water service disrupted because of the massive winter storm.

Texas’ power grid was “seconds and minutes” away from a catastrophic failure that could have left Texans in the dark for months, according to officials with the entity that operates the grid.

The remaining power outages were due to more local problems in the electrical system, which local companies were scrambling to repair. Gov. Greg Abbott said in a press conference Thursday that every available repair truck had been dispatched in the state to address the lingering electricity issues.

“What happened is absolutely unacceptable and can never be replicated again,” Abbott said.

While millions of Texans were left in the dark for days, people in El Paso, the upper Panhandle and parts of East Texas kept their lights on — thanks to power drawn from other parts of the country. — Texas Tribune staff

The Texas Tribune is launching a texting service for audiences who are relying on their cellular phones to get breaking news updates about the ongoing winter storm crisis, tips for how to get help and opportunities to ask our journalists your most urgent questions. To sign up, text "hello" to 512-967-6919 or visit this page. — Bobby Blanchard

Texas Tribune is a nonpartisan, nonprofit media organization that informs Texans — and engages with them – about public policy, politics, government and statewide issues. The original article is located at
https://www.texastribune.org/2021/02/19/texas-winter-storm-power-outage-ercot/.