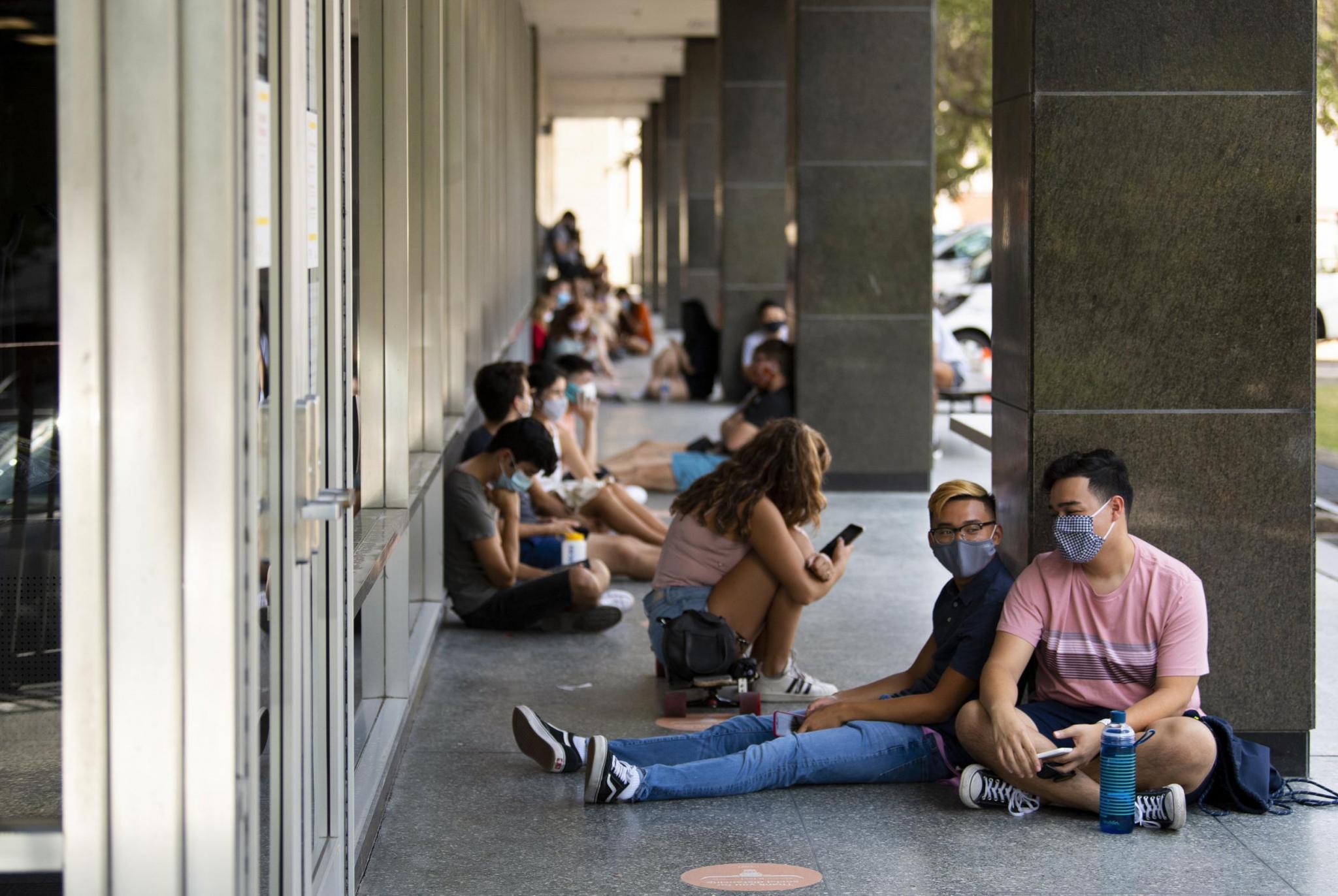 Students sit outside the Peter T. Flawn Academic Center at the University of Texas at Austin. Credit: Allie Goulding for The Texas Tribune

As Texas college towns see rising COVID-19 cases with the return of hundreds of thousands of students to campus, a small but increasing number of universities are disciplining students who attend or host house parties or Greek rush events.

“We have already begun formal action with both individuals and organizations,” Kristen Harrell, associate director for student life and student affairs at Texas A&M University, said Friday. “We will continue to take action on reports where we can specifically identify students or organizations.”

Schools, desperate to keep their doors open but worried about health risks to their students, are being put in the uncomfortable position of having to govern young adult behavior that is mostly happening off university property.

Baylor University is taking a comparatively hard line against students who violate the codes — promising fines, suspending Greek houses and a handful of students after parties, and increasing university police patrols in off-campus areas heavily populated by students.

At Texas A&M University, officials are urging members of the community to report student activity off campus that violates local, state and university health protocols such gatherings of more than 10 people and students not wearing masks.

But while reports of those crackdowns are beginning to increase, most Texas universities aren’t penalizing individual students for partying that takes place off-site.

Instead, those schools are relying heavily on cities, property managers, national organizations and the students themselves to combat risky off-campus behavior that threatens to increase community spread of the coronavirus.

The reasons: lack of resources, an emphasis on personal responsibility, or the fear that stiff penalties for noncompliance will backfire.

“We just have to trust that the measures that we’ve taken on campus follow them around,” said Dean Wilkinson, spokesperson for Sul Ross State University in Alpine. “We can’t sit there and monitor every single off-campus resident and what they're doing. It’s just not feasible.”

University leaders and health officials acknowledge that the desire to keep campuses safe and open often clashes with the logistics and, perhaps more significantly, the concern that punishment could deter students from getting tested, self-reporting cases and participating in contact tracing.

“I would love for universities to be able to provide some sort of punishment to students that are blatantly violating the social-gathering rules and having large house parties and organized events,” said Eric Schneider, epidemiologist for Hays County, home to Texas State University in San Marcos, which had one of the state’s highest per capita rates of positive COVID-19 cases in the spring, mainly among young adults. “But it’s a challenging line that they have to straddle because they want students to participate and help out when they do have a positive test, and to provide us with contact tracing and tell us who they were with, where they were at.

“But they don’t want to cause panic and fear across the campus as they’re basically trying to get back to normal.”

Reports of private house parties and rush events — as much a part of the back-to-school culture as student orientation — turned into national headlines and resulted in suspensions of Greek houses by their governing bodies, strongly worded messages to students from school administrators, and cautionary tales of infected students mingling in dorms and on campus.

A University of Texas at Austin student who witnessed Greek recruiting events said his peers “are pretending the virus doesn’t exist.”

“There would be 80, 90 kids in one room and no masks,” said the student, who asked not to be named because of fear of repercussion by Greek organizations.

Many of the Greek events have since been halted, he said, but the off-campus parties continue.

“It’s like all these kids do not care about the virus,” he said. “I have a feeling that the campus is going to shut down soon.”

UT-Austin has acknowledged in messages to students that off-campus parties were an issue at the start of the semester and encouraged them to stop large gatherings to prevent spread of the virus.

Those concerns only get worse when the situation moves off campus. At UT-Austin, only about 17% of the school’s approximately 50,000 enrolled students live on campus.

“Enforcing social distancing in classrooms, libraries, and other public spaces isn’t easy, but schools know they have little to no control over whether students adhere to safety guidelines when they go off campus or in private spaces in residence halls,” Rothenberg said in an email.

Last week, Lubbock, home to Texas Tech University, experienced its highest single-day jump in cases since the virus was first reported in the city.

Officials there called an emergency press conference and blamed off-campus activities, but made no announcements regarding additional enforcement efforts. Instead, they urged students to comply or face a school year that is 100% online.

Texas Tech President Lawrence Schovanec said Friday that these gatherings “present a challenge” to efforts to stop the spread of the virus. The parties are being reported to the school and local police, both by members of the university and by local residents, but enforcement can be difficult.

“The mayor, city council, and the local police have been very cooperative and supportive, but we all recognize that success in suppressing these gatherings is mixed,” he said in an email. “I’ve met with leaders of student organizations this week. They are proactive in their communication to the student body and supportive of the university’s efforts to enforce compliance with our safety protocols.”

Texas school officials say the situation is scary, to say the least.

“Certainly for any institution, worrying about what you can't control keeps you up at night,” Wilkinson said. “I was at UT myself. I was in Greek life. I know what that looks like, and I know what parties look like.”

“The university has rules it enforces on campus, and we rely on local authorities to enforce their rules off campus, which we support,” said J.B. Bird, spokesperson for UT-Austin, which has been in the spotlight in recent months for student gatherings that violated social-distancing rules.

At Texas State University, the rules allow for sanctions against students for “off-campus conduct that is likely to have an adverse impact on the campus,” said spokesperson Jayme Blaschke, but none so far have been disciplined for coronavirus-related violations.

Citing privacy rules, UT-Austin officials won’t say whether any students were sanctioned after a trip by 211 students to Cabo San Lucas, Mexico, for spring break resulted in positive COVID-19 tests for at least 49 students.

Austin and Travis County Public Health officials have met with police and city officials, Greek houses, apartment complex managers and student groups to ask for help in both enforcement and prevention of large gatherings off campus and similarly risky events.

UT-Austin has also contacted property managers at some of the major housing complexes for college students when officials learn that residents have hosted large house parties or other events on their properties, UT interim President Jay Hartzell told students in a recent message.

“Property managers are eager to use our information to improve the safety of their communities,” Hartzell said.

Officials at the University of North Texas are asking national Greek organizations and off-campus housing organizations to prohibit guests from their properties, similar to what the school is doing on campus.

Perhaps the most power that Texas universities can wield over off-campus student behavior comes through its recognized organizations, from sororities to student government and beyond.

Holding groups accountable for their actions as representatives of the school allows the universities to easily extend their enforcement procedures beyond the campus boundaries.

Most of the disciplinary action that has been reported has been connected to activities sponsored by fraternities and sororities, where schools have reported violations to national organizations overseeing these houses.

At TCU in Fort Worth, officials asked two sororities to self-quarantine.

UT-Austin reached out to the national offices and the advisers of student groups, including at least one sorority, after widely circulated Aug. 24 images showed a rush event off campus with a large group of unmasked women clustered on the street, officials said.

“The students who were in the photo on social media put themselves and others at risk and should get tested through the university’s Proactive Community Testing program,” read a statement released by UT-Austin. “We are reaching out to the advisors and national offices of the groups whose members were at the gathering to reinforce our expectations and will continue to look to the City of Austin to enforce its orders on public gatherings.”

At Baylor, the Phi Gamma Delta fraternity and several students were suspended in late August after two Greek house parties were reported to Waco police the week before classes resumed, according to a statement by Kevin Jackson, vice president for student life.

"It is important for you to know that out of care for the entire university community, we will take swift disciplinary action to address incidents of misconduct related to COVID-19,” Jackson said. “Investigations since last weekend have resulted in several students being placed in an interim suspension status and the overall suspension of a student organization.”

At Southern Methodist University, rules say that student organizations found responsible for violating the expectations outlined in the pledge will also be subject to disciplinary action, although officials there have not confirmed any sanctions so far.

Blaschke said that at Texas State, some social distancing violations have been reported at Greek houses that were previously suspended from campus activities for violations unrelated to the pandemic.

In those cases, he said, “Texas State has taken steps to notify their national headquarters and share law enforcement reports in our possession.”

By far, the most trumpeted method for curtailing risky behavior will be messaging campaigns.

At Texas A&M University in College Station, officials created a “street team in response to students hanging out in groups larger than 10 people, as well as not wearing masks,” said Kelly Brown, associate vice president of marketing and communications at the school.

The team members hand out masks and encourage their fellow students to follow the guidelines so that campus can stay open, she said.

At TCU, among other schools, students signed a pledge upon returning to campus and are pushing personal responsibility at the school.

“It is our expectation that all of our community members will abide by our guidelines for a healthy campus,” a TCU spokesperson said responding to questions about possible disciplinary measures. “In addition, our plan takes an aggressive stance on prevention measures by educating and asking our community to follow our health and safety guidelines, and be tested, take classes online and quarantine or isolate as necessary.”

Sul Ross, Texas Tech, the University of Texas at Arlington and several other schools say they have launched aggressive campaigns that include videos, video messages from administrators and social media posts to hammer home the importance of following protocols.

The personal responsibility line has resonated with student leaders on 35 Texas campuses, who recently formed the Collegiate Health Alliance of Texas as a way to push students to “understand what your role is and understand the power that each of us individually holds to really dictate how the semester will look,” said Austin Hickle, 21, an Southern Methodist University junior and head of the new organization.

“We were not formed because we felt that there was a lack of leadership from administrators,” Hickle said. “We were formed to actively engage students to do our part, and to understand that this COVID pandemic is one of our generation’s defining moments, and to step up and really understand that shared responsibility.”

This article originally appeared in The Texas Tribune at https://www.texastribune.org/2020/09/08/texas-universities-coronavirus-parties/.

The Texas Tribune is proud to celebrate 10 years of exceptional journalism for an exceptional state. Explore the next 10 years with us.