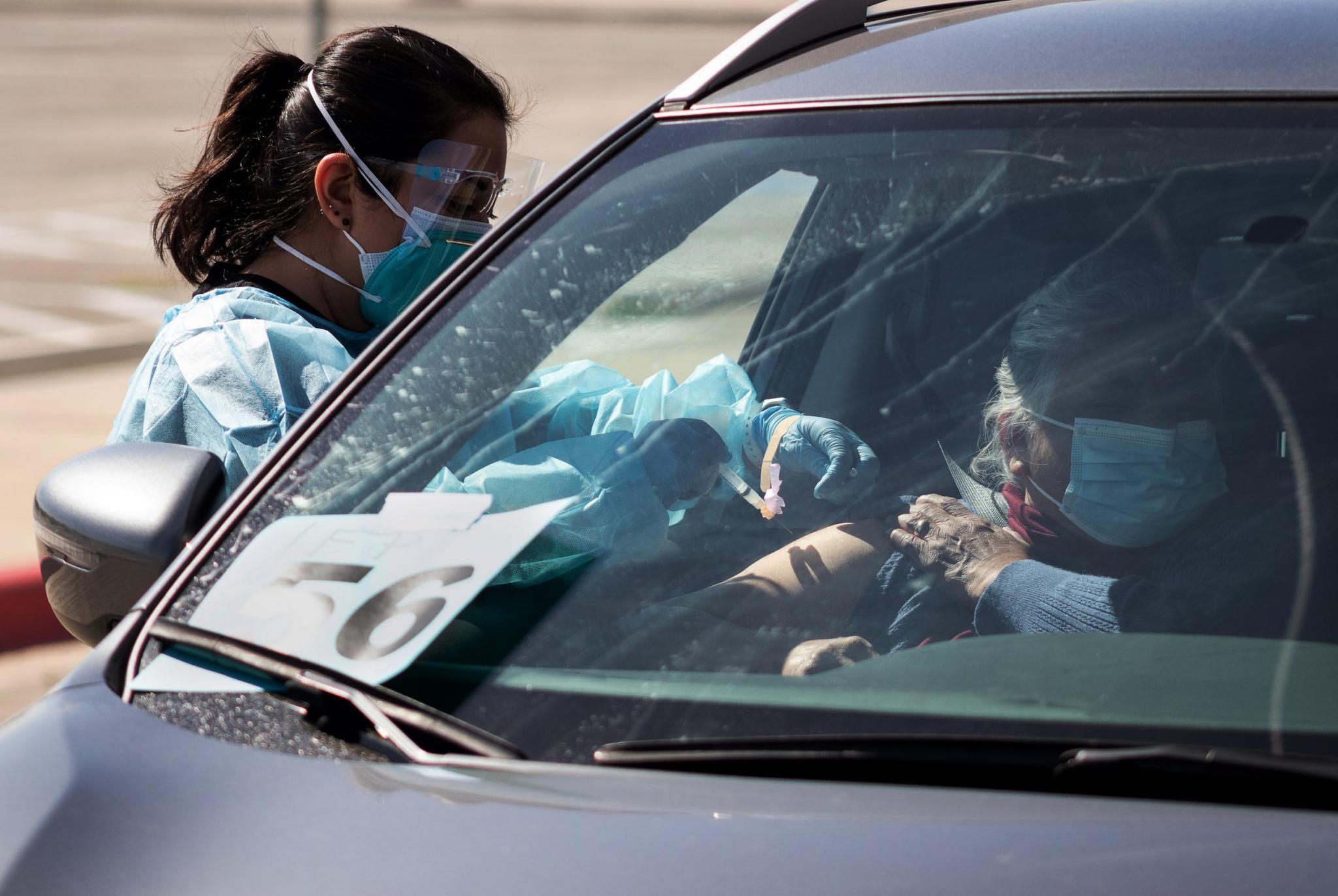 As vaccine eligibility widens, some vulnerable Texans are still fighting for access

Fredericksburg retiree Cyn White has been trying to find a COVID-19 vaccine in her Hill Country community since she became eligible for it in December.

White, 63, who has a disability, grew frustrated with the lack of available appointments, problems with overloaded websites, and zero follow-up from the locations that allowed her to get on a waiting list.

Calling it a “dire situation” for herself and others like her, White became panicked at the idea of Texas opening its eligibility to all Texas adults this week.

“What chance do I have to actually acquire a vaccine?” she said.

Then on Monday, hours after the state expanded eligibility to millions of Texans ages 16 and older, she finally left a desperate voicemail at Hill Country Memorial and got her callback.

She went in her first dose of the Moderna vaccine Wednesday.

“It’s like I’ve got a 100-pound weight taken off my shoulders. I could cry,” White said. “I slept very well last night.”

Texas became one of a dozen states to relax eligibility restrictions for the vaccine this week and open up availability to adults and some teens regardless of profession or health status.

But some question whether Texas — where demand still far outpaces supply, in spite of anticipated increases in dose allotments — is ready to open the floodgates when some more vulnerable Texans have still not been vaccinated.

“From the community consciousness, the response was, ‘But we haven’t served all our vulnerable people yet. What are we going to do about that?’” said Colleen Bridger, San Antonio’s assistant city manager and former health director.

Texas officials and some of the state’s top medical experts say the priority is still vaccinating the most vulnerable residents — a group of roughly 12 million to 14 million people. But with more vaccines coming in and some rural areas seeing fewer people in the early eligibility groups signing up for shots, the overall strategy is beginning to shift to vaccinating as many people as possible to stem spread of the coronavirus.

The move by the state to open eligibility triggered efforts in some cities to preemptively increase options for those who might fall through the cracks in the crush of newly eligible recipients.

In San Antonio, city officials opened up three weeks’ worth of appointments last week — about 30,000 — at the Alamodome while the eligibility requirements still restricted access, Bridger said. They were all filled immediately, she said.

Texas is showing significant progress in its fight against the pandemic, with deaths and hospitalizations down, signaling that the vaccines are working and that it’s time to broaden the base of people who are being inoculated, said Imelda Garcia, associate state health commissioner.

More doses are coming in and people are being vaccinated at a quicker rate, she said. Some 60% of Texans 65 or older have received at least one dose, she said.

“Quite a few things have come together to make this the right time to open up vaccine eligibility,” Garcia said.

The need to vaccinate as many people as possible should be balanced against the need to increase access to communities of color and other vulnerable groups, said Cesar Arias, director of the Center for Infectious Diseases at the University of Texas School of Public Health in Houston.

But with the emergence of fast-spreading virus variants, combined with the recent relaxing of statewide pandemic restrictions, the threat of what federal health officials called a potential “fourth wave” still looms in Texas, making mass vaccination all the more critical, experts said.

“There is even more urgency in Texas now to get people vaccinated as soon as possible, because my sense is that people are relaxing,” Arias said. “Infections are still going and are at a very high pace and not going to disappear. I’m actually worried that we will have an increase, and eventually more deaths.”

In Hidalgo County, where some 93% of residents are Hispanic and have been disproportionately hurt by the coronavirus, public health officials celebrated the news that more of their residents would be able to get vaccinated.

“We’ve always had a lot of demand for it, and there’s still a high demand,” said Eddie Olivarez, chief administrative officer for Hidalgo County Health and Human Services. “A lot of people have been very patiently waiting to get to this point. And here, we have an opportunity to serve as many as we can.”

Those affected most by the pandemic and by the uneven access to the vaccine are people of color, those with disabilities and those in lower-income jobs. The barriers don’t go away because more people are eligible, said Crystal Maher, who works in an Austin-area restaurant and is a member of the leadership committee for the national Restaurant Organizing Project.

The barriers to access can include lack of reliable internet, financial struggles or lack of work flexibility that prevent people from being able to spend time finding an appointment or driving distances to get them.

For people in public-facing jobs like the service industry, whom Maher said should have been prioritized early, the barriers only got tougher after Gov. Greg Abbott threw open the doors.

“Who are you to say that we’re essential for a whole year and then tell us we’re not essential enough to get the vaccine?” Maher said. “We weren’t prioritized when we should have been, and now we’re in the general population. More of our customers are vaccinated than we are. That’s scary, and that’s because they have access and privilege.”

The state’s Expert Vaccine Allocation Panel, which is in charge of who gets priority for the vaccine, grappled for months over the question of who should be eligible amid pressure from several groups, said Carrie Kroll, advocacy director for the Texas Hospital Association and an ad hoc member of the panel.

The panel elected to start with health care workers because they were the most exposed and were needed to keep the medical infrastructure going. Then the panel decided to focus on older age and medical vulnerability because the science showed they were more likely to suffer, die or overburden the health care system if they got the virus, she said.

“It really is hard if you are going to try and put a value on someone’s job,” Kroll said. “If they are the cashier at H-E-B or they are a person in charge with keeping the electrical grid running — they all have essential functions. At the end of the day it’s hard to assign value to one of them over another.”

Providers in some areas are beginning to report drops in demand for the vaccine, occasionally even reporting surpluses when there aren’t enough locals in the early priority groups asking for shots, said Garcia, who chairs the state’s Expert Vaccine Allocation Panel.

The state is allowing the transfer of extra doses to providers with waiting lists, she said.

State health officials said they aren’t automatically shifting surpluses, which are reported mostly in rural areas, to more needy areas because they want to keep the momentum going in areas where high percentages of people are being vaccinated.

“The advantage is that providers around the state can continue to vaccinate people in their areas,” said Chris Van Deusen, spokesperson for the Texas Department of State Health Services. “We didn’t want to pull vaccine from all rural areas, for example, and make everyone there wait while vaccination continued in the cities.”

In spite of issues experienced by rural residents like White, the strain on supply seems to be more of an issue in larger cities like Austin, where population size and demand can bog down waiting lists and make it difficult to find an open slot, and where there are more people of color who have been harder hit by the pandemic. Cities have responded to issues of vaccine inequality by prioritizing vulnerable Texans and Black and Hispanic residents.

In Harris and Bexar counties, large vaccine hubs are injecting thousands of Texans a day with the vaccine — but still face the daunting prospect of needing to administer millions of shots in order to get the majority of their residents inoculated.

Bridger said the San Antonio’s hub at the Alamodome has been operating at full capacity with 10,000 appointments per week and 200 volunteers per day, and the demand is still “overwhelming.”

Some 60% of the county’s 65 and older population has gotten at least one dose, she said.

“It seems like [demand] is more of a big-city problem,” Bridger said. “Other smaller, rural communities have had no trouble vaccinating all of the people who want to be vaccinated, and I think it makes sense for them to open up. But with 2 million people to vaccinate, we still have a ways to go.”

At Travis County’s public health sign-up, which doesn’t cover pharmacy appointments or private providers, nearly half a million people are on the waiting list — and only half of them fall under the early priority groups, a spokesperson with Austin Public Health said.

That makes for stiff competition for Bee Cave resident Teresa Autry, 69, who has qualified since December but still hasn’t found an open appointment.

“When I woke up at 6 a.m. and tried to get online and it wouldn’t even open, then I know that there’s going to be a glut of [requests],” Autry said. “And what are they doing to do? Run out of serum again? I don’t know.”

Austin resident Jose Martinez, 35, said he was waiting to “do the right thing” and sign up when he became eligible Monday, even though “everybody else I know has already gotten the shot.”

But he’s glad he can now make an appointment with a clear conscience and finally take the honeymoon he and his new wife were supposed to take a year ago.

“I’m sure by the summer it’ll be much easier, as I think the people who really want it are going to be the first people to sign up,” said Martinez, who works at a local health care association. “I think the demand will taper off a little bit.”

Marissa Martinez contributed to this report.

Disclosure: The UTHealth School of Public Health, the Texas Hospital Association and H-E-B have been financial supporters of The Texas Tribune, a nonprofit, nonpartisan news organization that is funded in part by donations from members, foundations and corporate sponsors. Financial supporters play no role in the Tribune’s journalism. Find a complete list of them here.

The Texas Tribune is a nonpartisan, nonprofit media organization that informs Texans — and engages with them – about public policy, politics, government and statewide issues. This article was originally published at https://www.texastribune.org/2021/03/31/vaccine-eligibility-texas/.