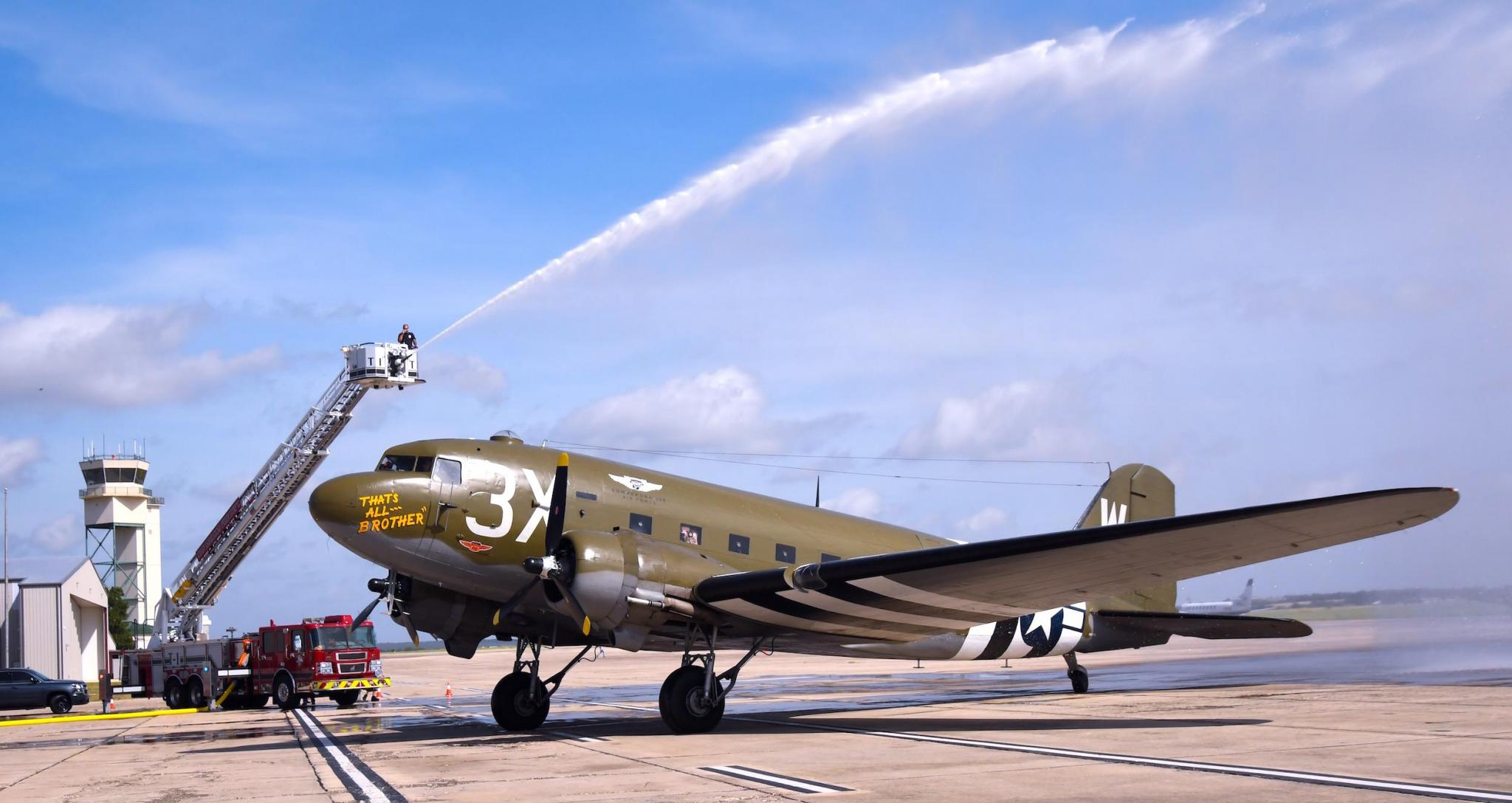 That’s All Brother receives a water salute from the San Marcos and Buda fire departments after returning safely from a month-long trip to Europe to commemorate the 75th anniversary of D-Day. Daily Record photos by Lance Winter

The aircraft was met with fanfare on Friday as it landed at 10:30 a.m. That’s All Brother spent a month in Europe to honor the 75th D-Day anniversary. The C-47 was given a water salute from the San Marcos and Buda fire departments. A few hundred gathered inside the Central Texas Wing of the Commemorative Air Force hangar at the San Marcos Regional Airport to celebrate the aircraft’s homecoming. 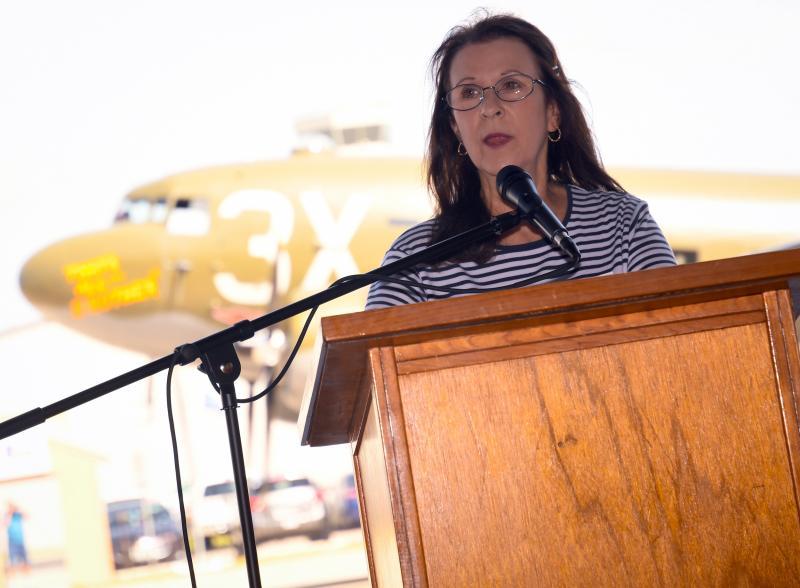 “We have just returned from a mission to Europe. For us this is a big deal,” Central Texas Wing Leader Joe Enzminger said. “Our team and this community has together flown a 75-year old airplane across the Atlantic ocean twice and visited the battlefields where men fought and died 75 years ago in a defense of our freedom.”

Enzminger said the team’s mission in Europe was to educate current and future generations, and honor living veterans.

“As someone who went on this trip, it was epic,” Enzminger said. “Wherever we went crowds gathered, sometimes by the hundreds, often by the thousands and a few times by 10s of thousands.” 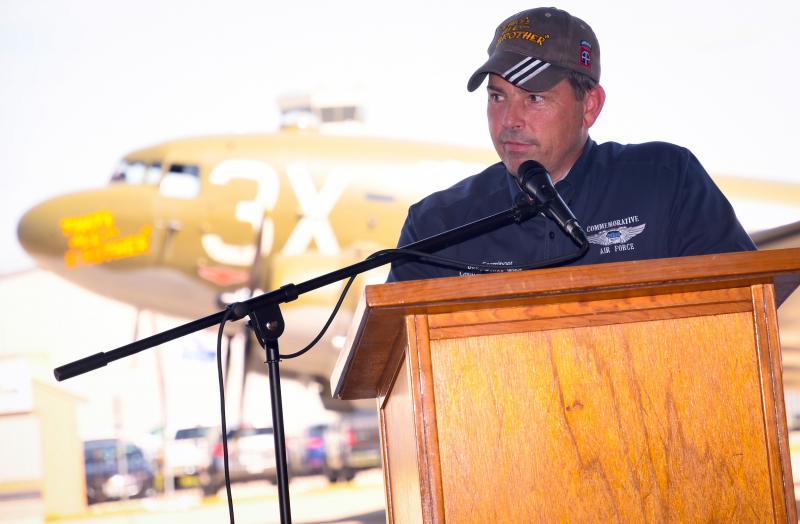 Enzminger said the trip included flying over Omaha Beach in Normandy, France to commemorate D-Day. That’s All Brother also flew over the English Channel in London, dropping paratroopers just as it was done in 1944. The plane circled Berlin during the 70th anniversary of the Berlin Airlift. That’s All Brother was the first time a CAF aircraft participated in the Paris Air Show. 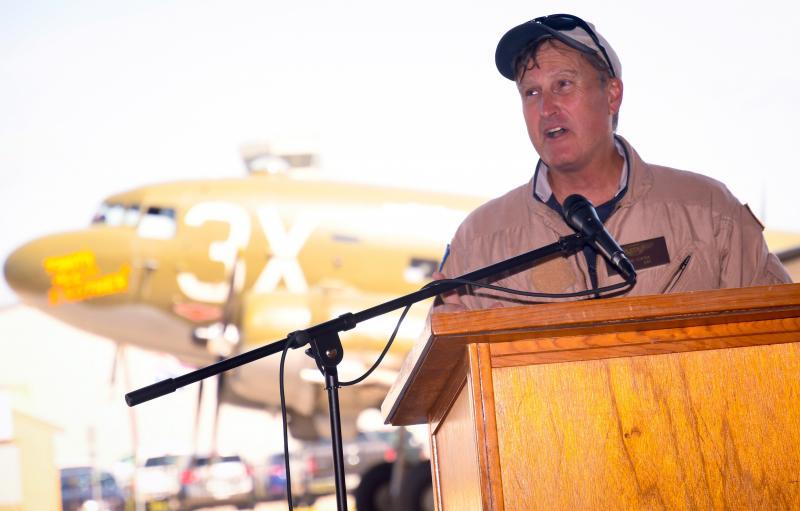 “What makes (That’s All Brother) special is the men we are honoring and the lessons we are keeping alive by flying it for another 75 years,” Enzminger said. “So with this, the completion of this mission comes a new challenge. This aircraft, with historical provenance that would make it home at the Smithsonian, is now entrusted to us the wider community of Central Texas. There’s no reason why it shouldn’t be flying 75 years from now.”

“That’s All Brother inspires new generations with the magical stories of the World War II era,” Hughson said. “It is truly an honor for our airport to serve as the home for this remarkable aircraft.” 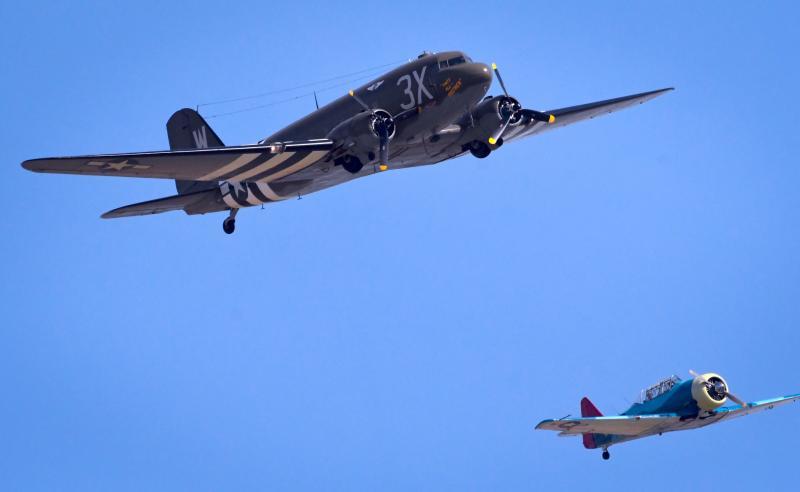 That’s All Brother flies by the San Marcos Regional Airport before landing on Friday. 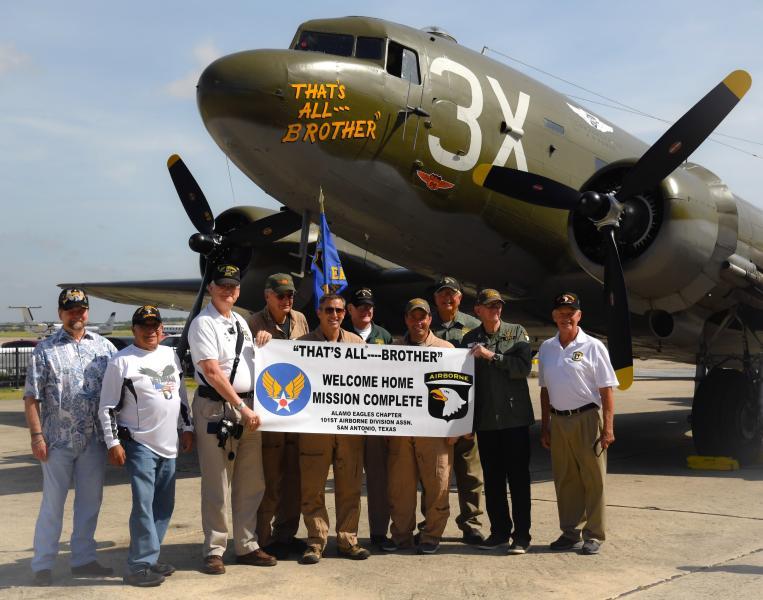