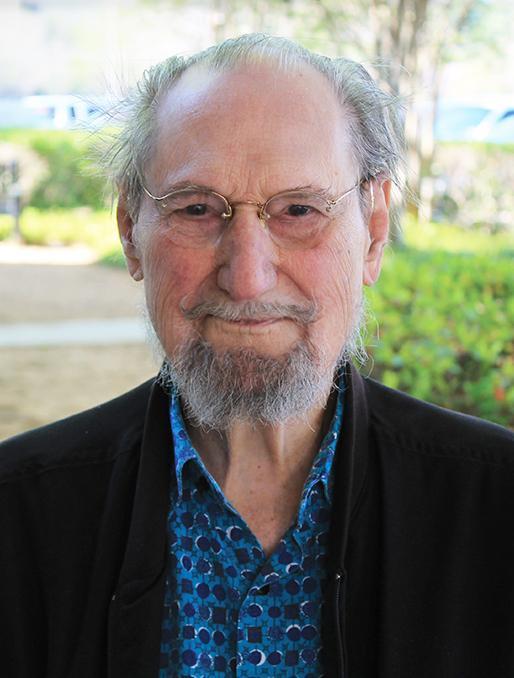 Long-time San Marcos resident Sterling Rogers died on Tuesday at age 96, following a brief illness.  A noted local artist and author, Rogers was a fixture in the local arts community from the early 1980’s through the early 2000’s.  He not only exhibited his own works, but he was also an active and vocal proponent of the local Art Guild.  He also taught scores of aspiring young artists through summer art camp programs sponsored by the Guild.  Sterling was also a member of the Writers’ League of Texas, writing a number of reviews for Texas Books in Review as well as a long series of articles for The Hardlife Herald, the journal of the 385th Bomb Group Association.  He authored and published some twelve original books of his own and served as editor for at least that many more works by fellow authors.  Among his own works are two memoirs that chronicle his early life as a west Texas farmer’s kid growing up during the Great Depression and his experiences as a part of a B-17 bomber crew and as a prisoner of war in Germany during World War II.  He also authored two children’s books that were illustrated by one of his granddaughters.

Sterling Harvey Rogers was born to John Milton and Mary Alice (Harvey) Rogers in rural Mitchell County, Texas on Valentine’s Day, 1924.  He was the sixth of nine children.  After graduating from Colorado City High School in 1941, he enlisted in the US Army in early 1942, shortly after the bombing of Pearl Harbor.  He was commissioned a 2nd Lieutenant in the Army Air Corp and served as a bombardier in the 8th Air Force in Europe.  His B-17 was shot down, and he and his entire crew became POW’s on April 29, 1944.  He often said he was imprisoned for “365 days and 8 minutes,” as he was liberated by Gen. Patton’s 3rd Army Group on the first anniversary of his capture.

Upon returning to the United States in 1945, he married his high school sweetheart, Bennie Blalock.  They were married for almost 66 years before her passing in 2011.  After leaving the Army in 1946, Rogers rejoined the new United States Air Force in 1947 and served until his retirement from active duty in 1963.  He then worked in the nascent information technology industry, first as a systems analyst for Sperry/Univac, and then for Teledata in San Marcos, and finally for the Texas State Health Department in Austin.  He retired permanently about 1981 in order to write and paint fulltime.

Visitation will take place Wednesday, July 29 from 4 to 6 p.m. at Thomason Funeral Home. A private graveside service for the immediate family, with full military honors, will take place at Fort Sam Houston National Cemetery in San Antonio on Thursday, July 30. Memorials may be directed to the Friends of the Austin State-Supported Living Center at ausslcfriends.org. Services are under the direction of Thomason Funeral Home. For more information and to sign the online registry, please visit thomasonfuneralhome.com.