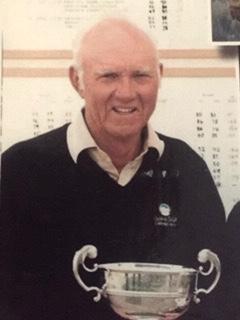 William “Bill” Maxwell Soyars passed away on July 2, 2019 at the age of 93 years. He was born April 15, 1926 to Erwin and Bernice Soyars. Bill’s grandfather, Dr. C.E. Evans, was the President of SWT for 32 years of what is now Texas State University.

The family moved to Sabinal where Bill excelled in football. After graduation from high school, Bill hitchhiked to College Station to enroll in Texas A & M. He was able to play varsity football as a walk-on. In 1944 this Aggie team was the only team to ever play in the Orange Bowl. The team was called the “Kiddie Korps” because many of the upper classman athletes had already been drafted into the military for World War II. Bill was drafted into the Air Force and served in Italy the last six months of the war. When the war ended Bill went back to A & M and finished his degree in Animal Husbandry.

Bill had married and had two young sons and moved his family back to Sabinal and went into ranching. In 1956 there was a severe drought and cattle prices hit rock bottom. Bill finished his flight training and got on as a flight instructor at the Camp Gary Army School in San Marcos and moved his family there.

Bill was an avid hunter and guided hunters on mule deer hunts. He took his sons on weeks long pack trips to places that could only be reached by mule or horseback. His youngest son, Tom, has carried on the tradition taking Bill’s grandchildren and great-grandchildren to places very few others will have the pleasure to see.

In 1972, Bill hired Mary Ann Hyatt, a bright and energetic woman to help him in the office and with his cattle business. His ranch headquarters was located where the San Marcos Outlet Mall is located today. For the past 47 years, Mary Ann has help Bill with his business, family, and personal affairs. They would often joke about him firing her a time or two and then begging her to come back as he was completely lost without her. After Bill was living at Brookdale Assisted Living, Mary Ann would take popcorn and lemonade for them to watch a parade on TV or take him for a long drives and to the Dairy Queen. She was also there when he passed away at the hospital in Kyle, Tx. Mary Ann will always be remembered as one of his dearest and closest friends.

Bill started playing golf in 1950 and in 1985 won the International Seniors Championship in Gleneagles, Scotland. Then in 1987 he qualified, made the cut and turned in a scorecard for 72 holes in the British Senior Open in Turnberry, Scotland. He then entered the British Senior Amateur Championship and lost by one stroke in 1986. The next year it was held in England and he was able to win the British Senior Amateur Championship that was held at Royal Cinques and Royal Princes’ courses. This was a major golf win. Bill’s name is placed in the Royal and Ancient Golf Association records in the Golf Club House at St Andrews, Scotland. He also won many tournaments here in the USA and had the honor of playing with a number of professional golfers like Hal Sutton and Jack Nicklaus.

Bill was blessed to spend the last 35 years of his life with his current wife, Tinka Kent, from Kenedy, Texas. They met and started dating in 1984. In Bill’s words, “Tinka was beautiful, poised and fun!” After winning the Caribbean Senior Amateur Golf Championship in the Dominican Republic, Bill ask Tinka to marry him as he took the stage at the award ceremony and she said “yes.” The two shared many great memories together over the last four decades, including traveling, attending golf tournaments and spending time with Tinka’s four children and grandchildren of whom Bill was especially fond of, John Kent (Deceased), Valle Moorash (Ron), Patti Hendrix (Billy), Annette Lovelace (David), Grandchildren, Clifford Schramm, Christi Hajek (Joe), Lindsey Hendrix, Holly Lovelace, great-grandchildren, Kaitlyn Hajek and Erin Hajek.

Bill’s funeral service will be held at Pennington Funeral Home Saturday, July 13, at 11 a.m. and laid to rest at 4 pm in Sabinal, Texas. In lieu of flowers please make donations to Greater Bethel Baptist Church, 726 Centre Street, San Marcos, Texas 78666, or the charity of your choice.