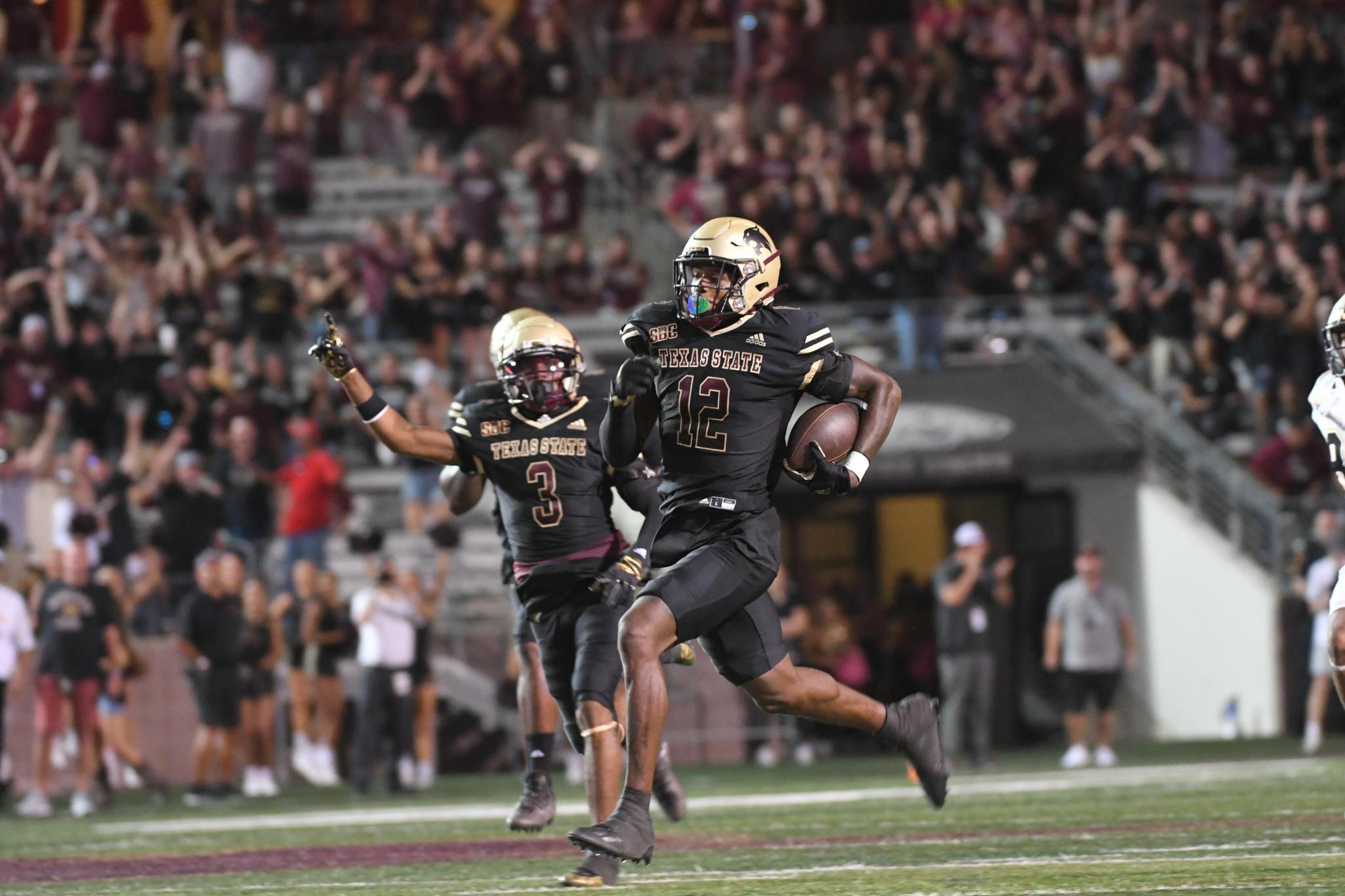 Above, Texas State junior safety Tory Spears returns an interception for a 94-yard touchdown during the Bobcats' 36-24 win over App State on Saturday. Daily Record photo by Gerald Castillo

Moments before, the Texas State redshirt junior safety hauled in his first career interception, picking off Appalachian State quarterback Chase Brice’s pass as the Mountaineers were driving, looking to stage a double-digit rally early in the third quarter.

With his legs churning across the turf, Spears cut to his right and with the help of his teammates he found the endzone to put the Bobcats up 30-3. It was one of many moments of elation for Texas State as it pulled off a 36-24 win over Appalachian State in front of 25,613 maroon and gold clad fans —  the most to pack Bobcat Stadium for a Sun Belt conference game.

“My legs started getting tired near the 40,” Spears said. “It was my first [interception]. My adrenaline just kicked in. I still can’t believe it.”

Texas State (3-3, 1-1 Sun Belt) entered Saturday’s game against App State (3-3, 1-2) as 19-point underdogs. But as the clock rolled to zeroes, it didn’t matter what the Las Vegas prognosticators predicted as the Bobcats secured what head coach Jake Spavital described as a “big-time moment” for the program.

“Just, overall, a great team win,” Spavital said. “Coach [Shawn] Clark has a really good football team. They’re beat up like a lot of teams are across the country right now. You know, that’s a team that beat Texas A&M and went toe-to-toe with North Carolina. They had College Gameday at their university, and they’ve done a lot of great things there. For us to win that game was a big-time moment for our program. It was the first time we beat App State in school history. It took every single one of us.”

Texas State’s offense quickly found a rhythm on its opening possession, marching down to the App State 4-yard line. But Mountaineer cornerback Dexter Lawson Jr. squashed the Bobcats’ momentum with an interception in the endzone.

Texas State, however swung momentum back in its favor by halting App State on 4th and 1, putting itself in good position at the Mountaineer 42.

The Bobcats scored first on the ensuing possession thanks to a 2-yard touchdown run by sophomore Lincoln Pare. Texas State kept swinging, landing punches throughout the opening half with a 2-yard touchdown pass from redshirt junior quarterback Layne Hatcher to redshirt freshman wide receiver Charles Brown. Texas State added a 33-yard field goal from kicker Seth Keller followed by a 23-yard touchdown pass by Hatcher to  sophomore wide receiver Ashtyn Hawkins to put the Bobcats up 24-0.

App State put its first points on the scoreboard with a 30-yard field goal by kicker Michael Hughes as time expired in the opening half to get within 24-3.

The Mountaineers looked poised to take full momentum as they drove deep into Texas State territory before Spears dashed App State’s hopes with a 94-yard pick-six to push the Bobcat advantage to 30-3.

App State fought back with three passing touchdowns — two from Brice to tight end Henry Pearson and one to wide receiver Dalton Stroman — in the second half.

But two field goals by Keller gave Texas State enough cushion to pull out the 36-24 victory.

“Once the clock said one and then zero, I’m pretty sure everybody had the same mentality I had — I was happy,” said Hawkins, who hauled in six receptions for 106 yards and a touchdown. “I thank the crowd, I thank the fans, everybody that came up. We wouldn’t be here without them.”

Spavital knows the Bobcats will have to put in the same effort they did Saturday night if they want to win their first road game of the season.

But, on a night where everything came together to take down App State, the fourth-year head coach knows Texas State proved it can compete with anybody.

“I just think that’s a momentum kind of game for us to understand what we’re capable of doing when we play together and play clean football and play the game of football the right way,” Spavital said. “So, that’s a big win for these kids in terms of just the confidence level and showing them and showing everyone that we can play with anybody because [App State’s] a very good program.”