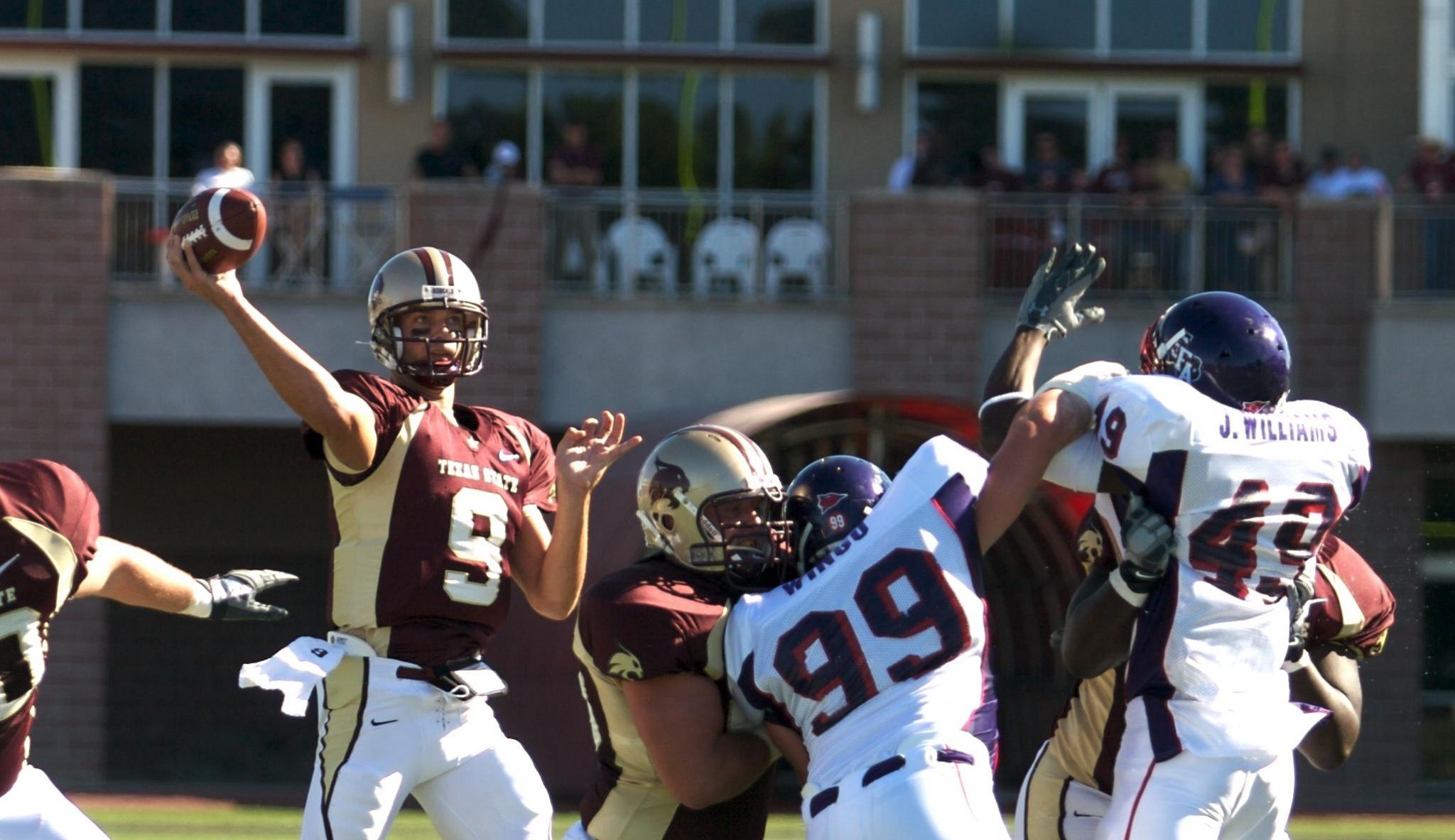 Former Texas State quarterback Bradley George, who is the program’s all-time leading passer, was inducted into the Texas State Hall of Fame on Friday. Above, George drops back and prepares to fire a pass during his career with the Bobcats. Below, George walks off the field with is “States Up” following a win over Sam Houston State. Photos courtesy of Texas State Athletics

One of the most prolific passers in Texas State football history was honored this weekend.

Former Bobcat quarterback Bradley George was inducted into the Bobcat Hall of Honor this Friday.

Being Texas State’s all-time leading passer in career yards, career passing touchdowns and most touchdown passes in a single season, George was completely taken aback about being named into the hall of honor.

“This is super special to me,” George said. “It was something I didn’t expect, maybe down the road possibly, but when I got the phone call from my old football teammate Damien Williams, about being inducted then Don Coryell gave me a call to give me the news and I was caught off guard and surprised by it. I’m super honored and blessed to be considered for anything like that so I’m super stoked.”

George’s journey into Texas State history wasn’t the normal experience a high school recruit would have.

“I went to New Braunfels Canyon High School and my older brother was playing both football and baseball at Texas State,” George said. “When I was in high school, I was dead set on playing both football and baseball at Southwest Texas State as it was called back then which was one of the only schools that was going to allow me to do that. I got recruited by David Bailiff and Bob DeBesse. Well I decided to go with the Cincinnati Reds who drafted me and tried baseball out for about four years before deciding football was what I wanted to do.”

After ending his stint with the Reds, George wasn’t even thinking about attending Texas State and had committed to play for Louisiana Tech before he got a phone call from then-head coach David Bailiff.

“I was going to go to school at Louisiana Tech before I heard David Bailiff got the job at Texas State,” George said. “He had heard I was coming back so he called me saying, ‘I heard you were coming to football so you ought to give me a shot.’ I told him I was a man of my word and that I had already committed and that I had been on official visits with the Louisiana Tech family. However, out of courtesy, I went and visited David Bailiff. If it wasn’t him, I probably wouldn’t have done that because I wanted to play quote, unquote ‘bigger football’.”

It was that chance visit that flipped everything for George.

“I visited Texas State on a Friday in January with everyone coming back to class on a courtesy call to David Bailiff and I had a day tour,” George said. “About being there half of the day I thought to myself, ‘What in the world would I leave this place for?’ I have my whole family here, my friends are in the area, and the rest is history.”

“Really a lot of credit goes to David Bailiff,” George continued. “None of this really happens if he didn’t show me the light and get me to Texas State.”

Perhaps the season George holds closely is the famous 2008 Texas State football year though the season didn’t quite pan out in the early going.

“That season was really special to me because the guys on the team and the coaching staff were all picked to finish near the bottom of the Southland Conference,” George said. “We started off the season pretty rough, including for me. Most people do not remember this but I was actually benched for a couple of games and I didn’t play well really early. We won our season opener by one possession then we got beat by SMU where I got pulled in that game.”

After not starting against Northern Colorado and Southern Utah, George found his footing when the Bobcats hosted Texas Southern before leading Texas State to an upset win over McNeese State.

“I didn’t play much for the next couple of games,” George said. “That was until Coach Bush told ‘Hey you better be ready because you are going to be the starter again. When you are back in there, we are going to air it, take shots and call plays to the best of your ability.’ You know I’m a taller pocket passer type guy who really wasn’t a scrambler. It was at halftime during the Texas Southern game where I was put back in and we just rolled. Then the very next week we went into McNeese, who was the No. 3 ranked team in the nation, we won our first conference game. From that point forward, our confidence was sky high.”

But of course, no one can talk about the 2008 season without the legendary game against Sam Houston State. 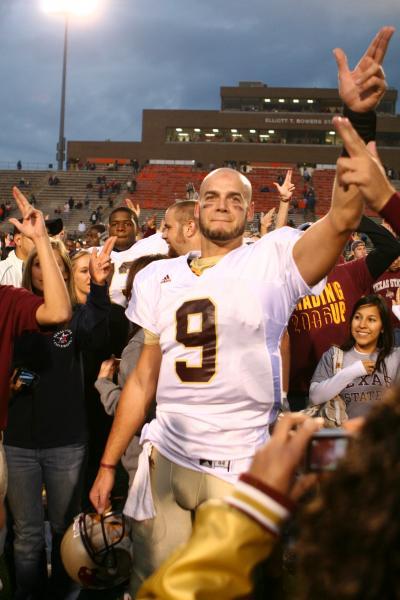 “We rolled into the Sam Houston game knowing we had to win that game to win the conference championship,” George said. “They jumped out on us 21-0 with Rhett Bomar as their quarterback. We just kept fighting and we clawed back in it at halftime before we took the lead right as the game was ending. Then Sam Houston threw a jump ball, Hail Mary-type throw to tie the game and sent it to overtime. It was a roller coaster of emotions.”

“When we won that game, it was a super special moment considering how far we had come along that season,” George continued. “From not being ranked at the beginning of the season to beating our arch rival to win the conference was a day we were never going to forget.”

As always, George couldn’t go out thanking just himself.

“First off it all starts off with the offensive line,” George said. “Then I was pretty blessed with some awesome receivers…I was also really blessed to be surrounded by such an awesome coaching staff.”

“Even though my name is going to be [in the Hall of Honor], this was a group accomplishment in my opinion,” George continued.