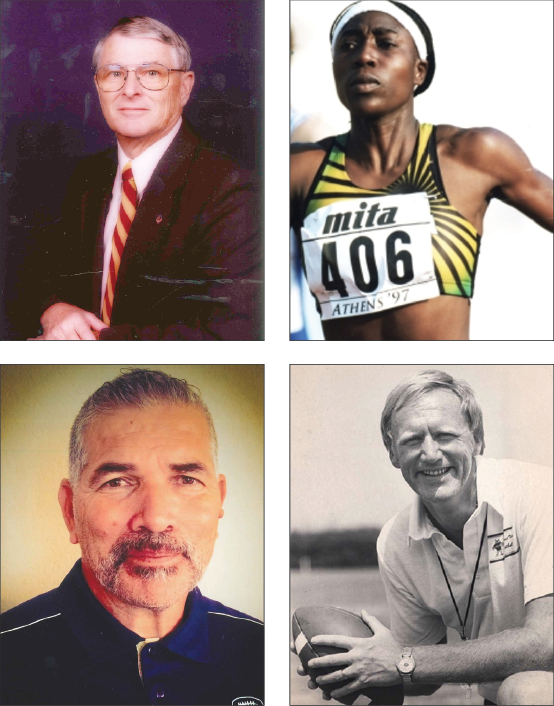 Patton is the first athletic trainer to ever be inducted into the Hall. He graduated from the University in 1962 with a bachelor’s degree in education and was hired by former Texas State football and basketball coach Milton Jowers. Patton was promoted to Director of Sports Medicine in 1977 and held the position through 2008. Patton also worked as an academic during his time at Texas State and received multiple national awards in athletic training.

Turner competed for the Bobcats from 1993-95. She transferred from Barton Community College, where she received 16 National Junior College All-America honors. Turner was selected Southland Conference Athlete of the Year in ‘94 and ‘95, winning six gold medals at the league meet during her two seasons with the maroon and gold. Turner went on to win consecutive NCAA titles in the 800 meters with a time of 2:01.50 in ‘94 and a program record of 2:00.27 in ‘95. Turner also ran for Jamaica in the 1996 Olympic Games in Atlanta in the 800 meters and 4x400-meter relay.

Vela and Wacker were both part of the NCAA Division II National Championships at  Southwest Texas State in 1981 and ‘82. Vela was a four-year letterman for the Bobcats, playing football from 1979-82. His 20.89 yards per catch is the best mark in school history, and he sits third all-time with 2,110 career receiving yards. Vela went on to play three years professionally, beginning with the Los Angeles Raiders in 1983 and ending with ending with the San Antonio Gunslingers of the USFL.

Wacker was the head coach of the Bobcats during the same time as Vela, leading the team to a 42-8 record under his tenure, the highest winning percentage in program history. Wacker went on to coach the TCU Horned Frogs after winning the 1982 College Division II Coach of the Year honor. He returned to SWT in 1998, serving as the University’s athletic director through 2001. Wacker passed away in San Marcos on August 26, 2003, and is survived by his wife of 42 years, Lil.

The 2019 Induction Ceremony will take place on Friday, Nov. 15, in the J. Garland Warren Room at Bobcat Stadium. The inductees will also be recognized at halftime during Texas State’s game against Troy the next day.