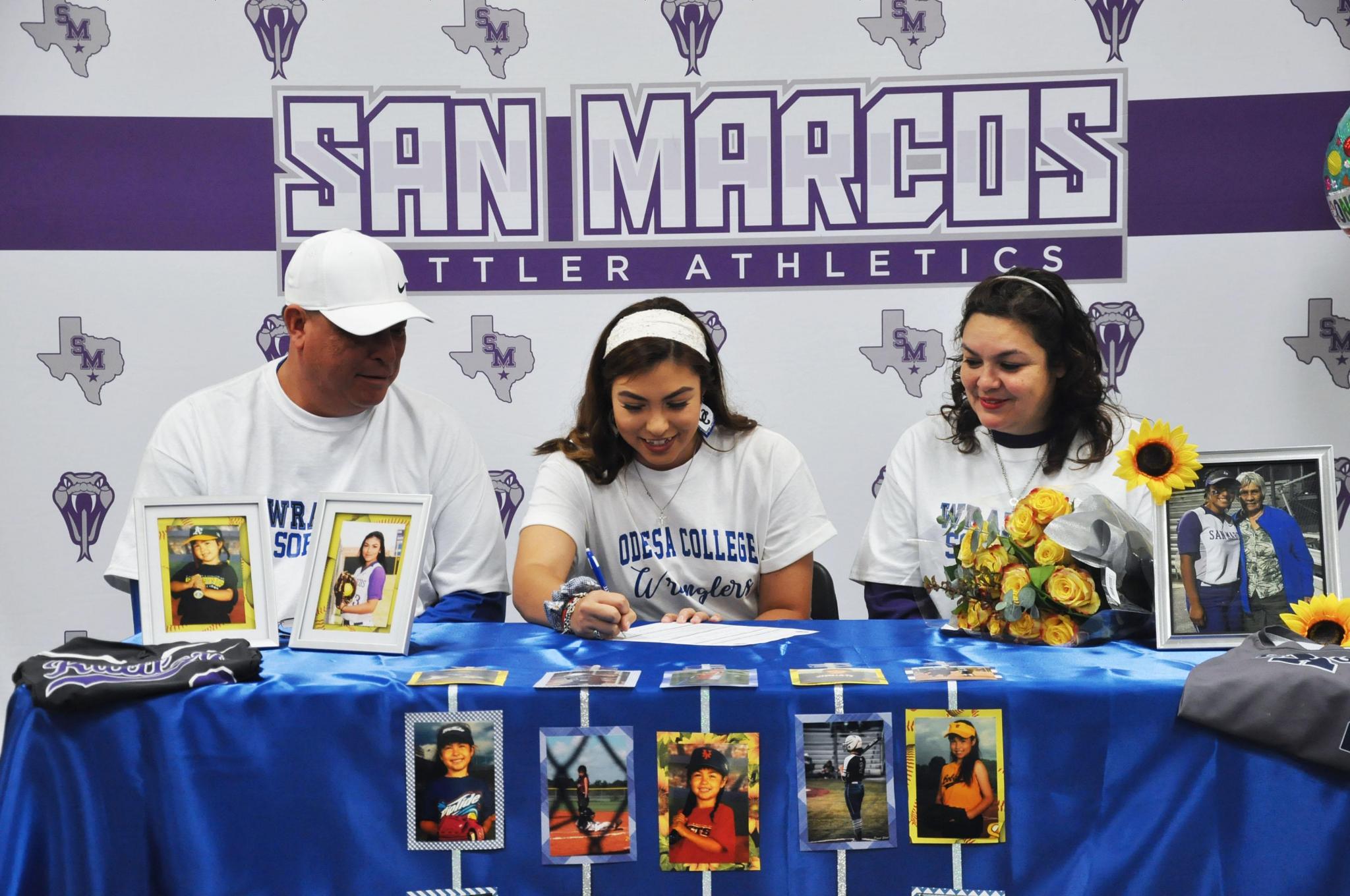 When she arrived at San Marcos as a freshman, head coach Catherine Stoughton could tell she was special. Stoughton placed Garcia on the varsity roster — not common for Stoughton’s teams. She’s since played every position on the field on the field for the Lady Rattlers.

“Even her sophomore year we had to have her pitch a little bit. So she's done a little bit of everything,” Stoughton said. “It's nice to have a dynamic player like that and someone who's got such a broad skill range, because you know that if you get in a pinch, you can use her and she'll do it 100 percent. She's just a very remarkable young lady, for sure.”

Garcia’s switchability paid off on Friday, when the senior signed a letter of intent with Odessa College.

Garcia doesn’t remember a time when she wasn’t playing softball. She started in the sport at three years old, playing tee-ball at the San Marcos Activity Center. She remembers the players being so small, they couldn’t get the ball unstuck from their gloves.

Her versatility expanded off the field as she grew up. She ventured into other sports, like wrestling. She took charge of San Marcos’ student section, joined student council, Texas Association of Future Educators and National Honor Society, and worked her way into the top five percent of her class.

But she’s always stuck with softball.

“She's a unique kind of girl. When I say unique, meaning that she excels in a multitude of areas. She's got strengths in all aspects; academics, leadership, athletic ability. She just does a little bit of everything,” Stoughton said. “When we come out and have workouts, you know, she'll be pushing people, 'Hey come on, come on, let's go, let's go.' So she's a good motivator. She stays very even keel, stays positive, doesn't lose her composure on the field, which is why she's such a good player.”

Garcia visited Odessa College in late October. She liked the homey feel to the campus, the idea of eight-week courses compared to semester-long classes, and the individual attention she’ll receive from her professors. She plans to major in psychology and graduate with an associate’s degree from the junior college.

“The team, I love the coaches,” Garcia said. “They're all about hard work and they know exactly what to do. And I've seen improvements from prior to meeting them.”

Stoughton expects Garcia, now a team captain for the Lady Rattlers and mainly playing third base, to be one of the top players on the team again this year. She noted that the senior has added a lot of strength since her freshman year, transforming into a power hitter.

Garcia is excited for the season to start.

“I'm just trying to get myself as best I can be to be ready to go and make a difference in Odessa,” Garcia said.