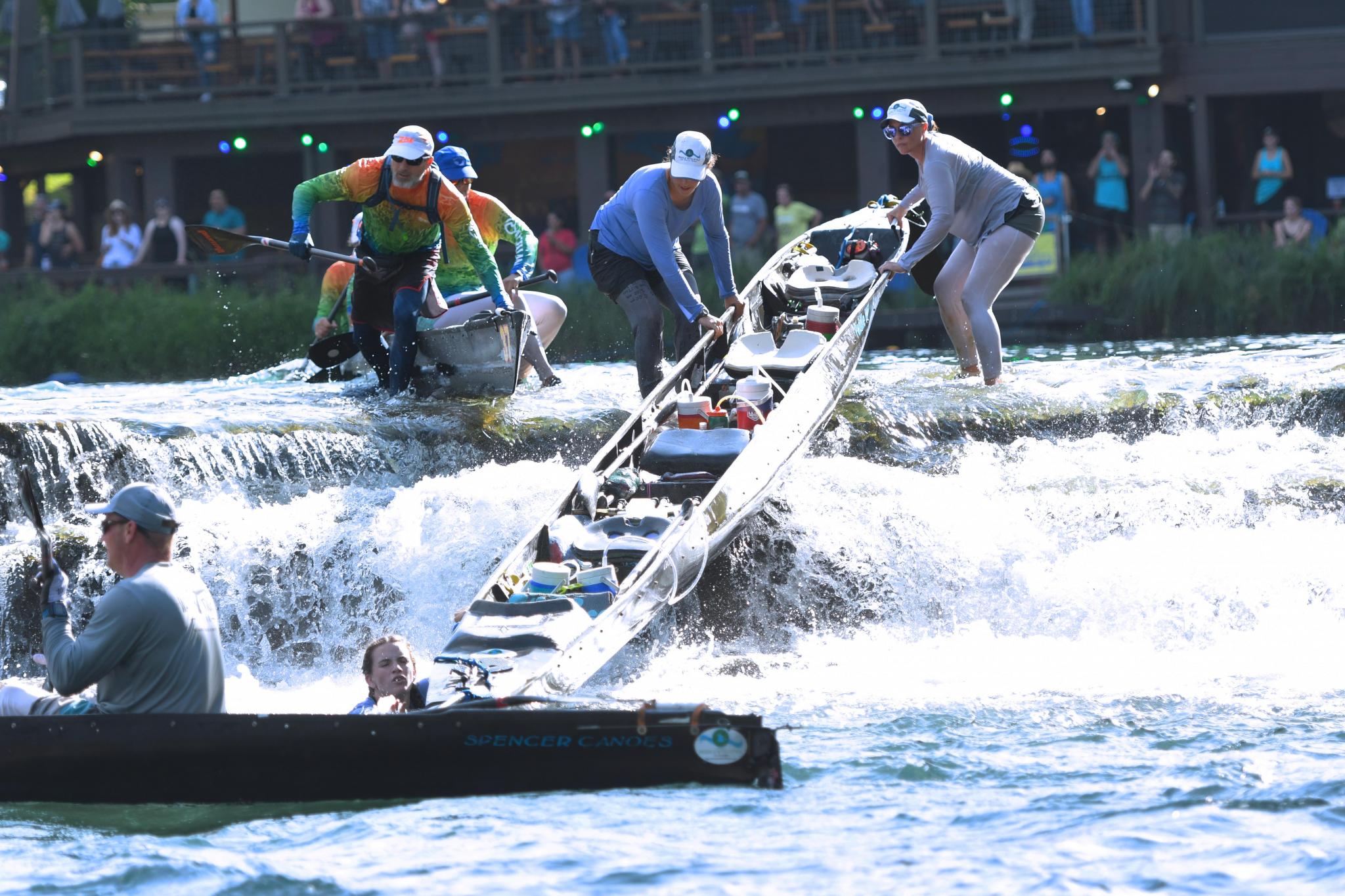 Mollie Binion and Holly Orr are competing in the 2021 Texas Water Safari just nine months removed from completing the Great Alabama 650. Above: Binion and Orr's team "Single Bladies" lifts their canoe over the waterfall at Rio Vista Park. Photo by Gerald Castillo

Binion, Orr back on water again at 2021 Texas Water Safari

With “The World’s Toughest Canoe Race” canceled in 2020, Mollie Binion and Holly Orr sought out “The World’s Longest” instead.

Both are longtime paddlers and veterans of the Texas Water Safari — an annual boating competition that spans 260 miles from San Marcos to Seadrift. Binion, a local real estate agent, has logged seven Safari finishes. Orr, the owner of canoe and kayak tour agency Paddle With Style, has completed 13.

In 2014, Orr set a new record in the Women's United States Canoe Association (USCA) C1 category with a time of 57 hours and 49 minutes. The event’s website described the USCA C1 class as “without a doubt, the hardest type of craft in which to finish a Safari” as the race is run solo with a single blade paddle in a small, rudderless boat.

The two became acquainted by racing in the Safari over the years. They also both volunteer as river tour guides for Explore Austin, a nonprofit organization that provides outdoor adventures to the youth community. So when the 2020 Safari was shut down to the COVID-19 pandemic, they had to find another way to compete on the water. 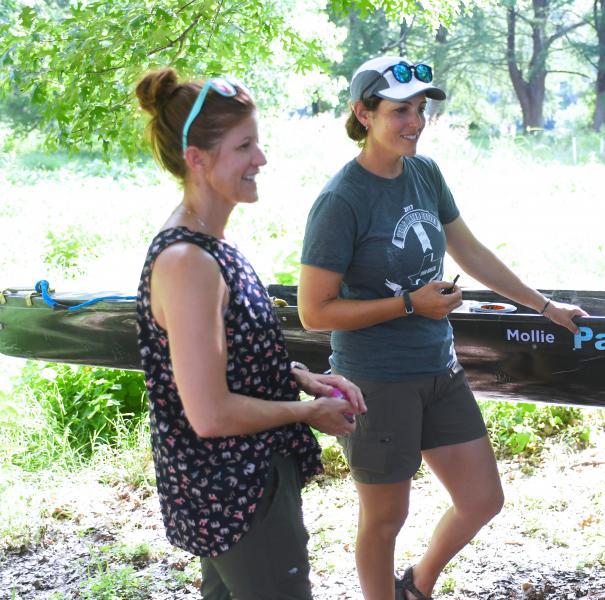 Binion (left) and Orr (right) at the Meadows Center during the Safari check-in. Photo by Gerald Castillo

“We were bummed,” Orr said.

The Great Alabama 650 soon popped up on their radar. “The World’s Longest Annual Paddle Race” begins at the northeast Alabama-Georgia border and stretches the entire 650 miles of the core section of the Alabama Scenic River Trail down to Mobile Bay in September.

The prospect of rowing down a new river excited the pair.

“It's taken me 85 hours to do (the Safari),” Binnion said. “But I knew that five to seven days would be something new that I hadn't pushed myself to do before. And so, seeing if I could do it and seeing how fast we could do it was really the big appeal.”

“If you choose to go through a hard challenge, for me, it helps me be able to cope with challenges I don't choose,” Orr said. “It also really strengthens relationships and friendships and brings that bond that you don't have until you go through hard things together.”

For better and for worse, the Great Alabama 650 was notably different from the Safari in many ways. The distance was much longer than both Binion and Orr were accustomed to. They didn’t spend nearly as much time analyzing the river or training for the event as they only decided to enter the race a few weeks prior. They had to row through whitewater rapids, which Binion said she didn’t have much experience with.

There were some advantages, too. They had the race route mapped on a GPS and any supplies or equipment needed could be delivered to the racers at checkpoints. In the Safari, racers are limited to a SPOT tracking device and can only be delivered items of food, ice, drink or medical materials by their team captains.

It was an overall tidy race, too. There were fewer logjams to navigate. Binion and Orr didn’t have to deal with trudging through the thorny San Marcos River banks during portages. Aside from sweat, they stayed fairly clean.

“We got to a dam (in Alabama) and our bank crew just picked up (our boat) and we were just like, ‘Whoa,’” Orr said. “Whereas (in the Safari), the bank crew puts their hands in their pockets and they're like, ‘Good job guys! Good luck!’ So that's kind of a big difference.”

The duo finished the 2nd Annual Great Alabama 650 in six days and seven hours, placing second in the Tandem class and fourth overall out of 16 entrants.

“It was a new challenge. It was very much a beautiful river that I felt very lucky to get to see from start to finish,” Binion said. “And so that was a really big challenge that I hadn't done before. I felt accomplished after we finished it.” 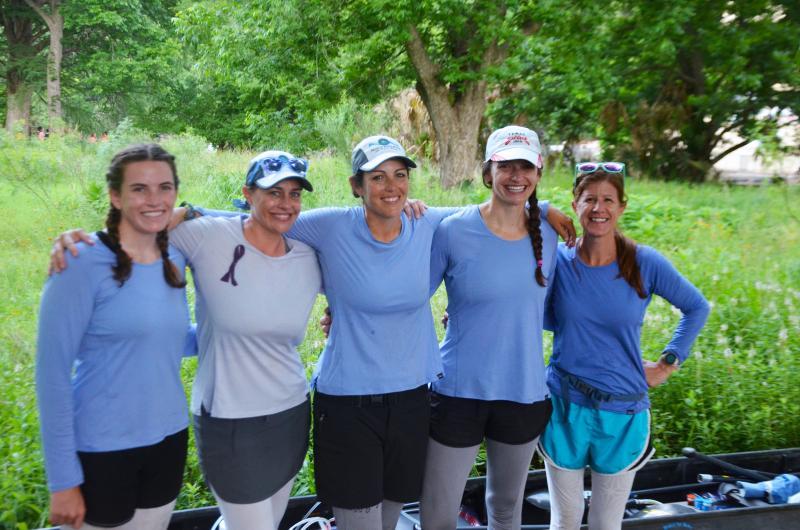 Completing a race more than twice as long as the Safari didn’t stop the pair from coming back this year. Binion and Orr set out from the Meadows Center for their eighth and 14th Safari, respectively, Saturday morning. They make up two-fifths of the Women’s Unlimited team, “Single Bladies,” joined by Cecili Bugge, Lydia Huelskamp and Melissa James with the goal of finishing in the top 15 overall.

What keeps Binion and Orr coming back?

“The people. It really is the friendships that come,” Orr said. “And they always say ‘You're born into a family,’ then sometimes you create a family. And this is a little bit of that for sure.”