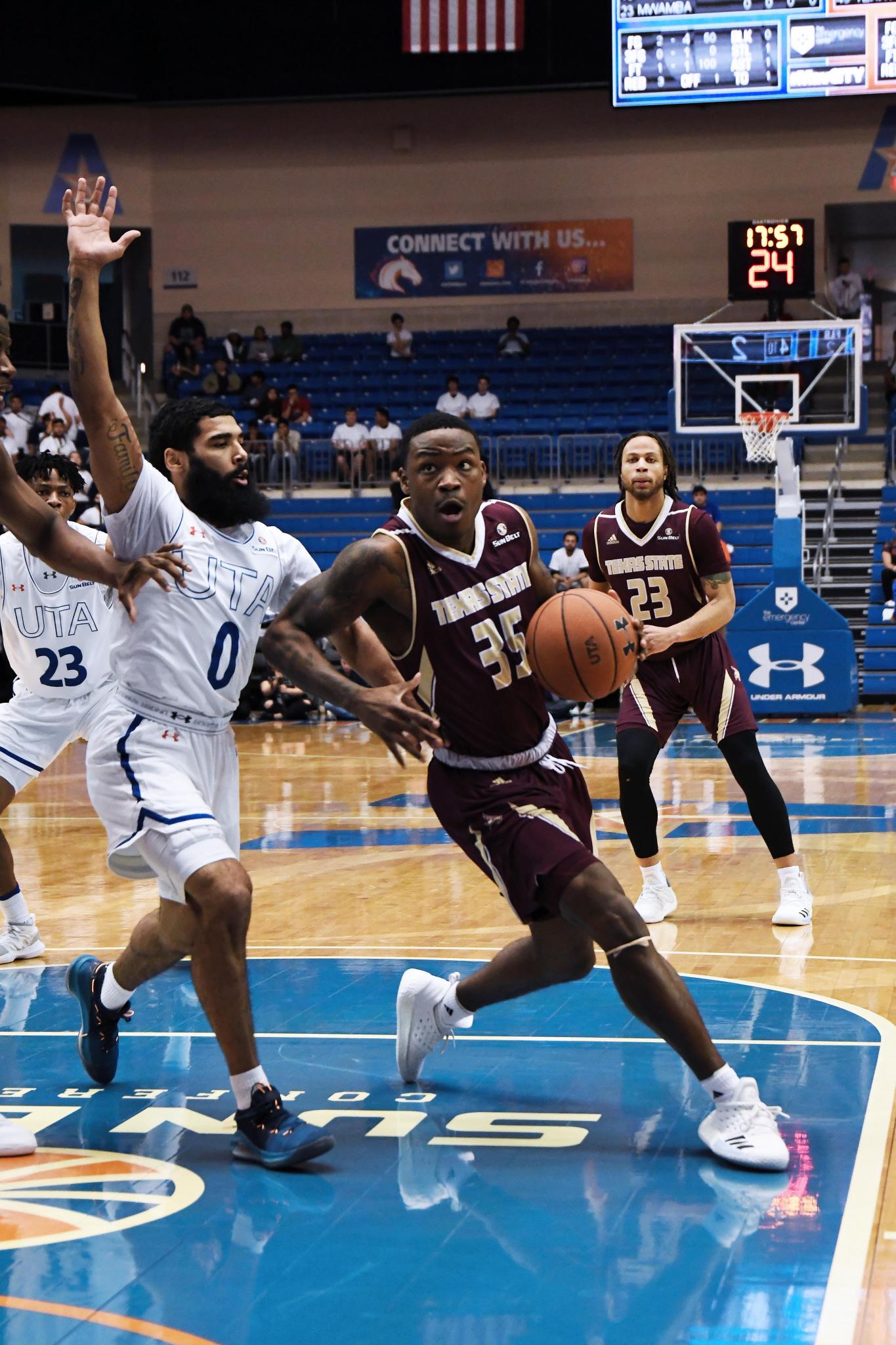 ARLINGTON — Texas State somberly walked back to the locker room Saturday afternoon after its hopes of claiming its first Sun Belt championship and first regular-season title in 20 years came crashing down.

The Bobcats suffered an 81-73 loss to UT Arlington in front of a crowd of 2,702 mixed in maroon and blue inside the College Park Center in Arlington.

“We thought we could come up here and win,” head coach Danny Kaspar said. “But we got beat by a good team on their home court. We did not play the type of game we needed to play in order to beat this team — UTA — on their homecourt. This would’ve been a much lower scoring game if we were going to win the game.”

UTA junior guard Brian Warren put together a career effort with 30 points to lead the Mavericks to victory in their first matchup against Texas State on Feb. 2. Saturday’s performance showed that Warren is quickly evolving into a Bobcat killer.

“Brian Warren is a thorn in our side,” Kaspar said. “Without him, we might have won both games but he has been a great player against us. My hats off to him and his performances against us.”

“I do believe when they called two quick fouls on Nijal (Pearson), I think it changed their way of thinking in terms of aggressiveness,” Kaspar said. “I’m not very happy with the way the game was called but it is what it is.”

“It’s secrets man,” Ogden said. “We threw in a little amoeba defense but other than that we were good.”

Texas State junior forward Eric Terry ignited a late run with back-to-back slam dunks to cut UTA’s lead to 40-34 with 59 seconds left in the first half. Harrell knocked down three free throws after getting fouled on a shot beyond the arc to get the Bobcats to within 40-37.

But Maverick redshirt junior guard Edric Dennis sanked a 3 right before the buzzer to put UTA on top 43-37 at the intermission.

The Mavericks quickly extended their advantage to double digits in the second half. Texas State’s offensive struggles continued and UTA pushed their lead to as large as 70-54 with 4:39 remaining in regulation.

The Bobcats staged a late-half rally and an And-1 basket from Harrell cut the deficit to 75-70. Texas State’s defense stiffened and forced a turnover on the ensuing UTA possession.

Shead drove in the lane looking to make it a single-possession game but Warren came up with a game-sealing steal.

“Everybody wanted it,” Shead said. “We lost. It happens. We’ve got to move on. We’ve got a couple days to prepare for the (Sun Belt) tournament. Now we’ve got to win three games to make it to the (NCAA) tournament. So, I mean, it wasn’t the last game so we just got to look at the next one.”

Pearson led the Bobcats with 13 points followed by 12 points from Jaylen Shead. Harrell and sophomore forward Quentin Scott added a combined 25 points off the bench.

Saturday’s loss ended Texas State’s chances of securing a semifinal bye in the Sun Belt tournament. The Bobcats fell to the No. 4 seed after entering the day at No. 2. They’ll start tournament play on Friday at 5 p.m. inside Lakefront Arena in New Orleans.

Kaspar said they’ll have to go back to the drawing board as they look to make a run at the tournament championship.

“We have to win three games instead of two (in the tournament) that’s the way I see it,” Kaspar said. “We’re going to have to leave a day earlier than we were going to leave. But something’s got to change ... We have to come back and do some things and play the game we know how to play. We have a certain style of play that has allowed us to win 23 games this year and we’ve got to go back to that.”