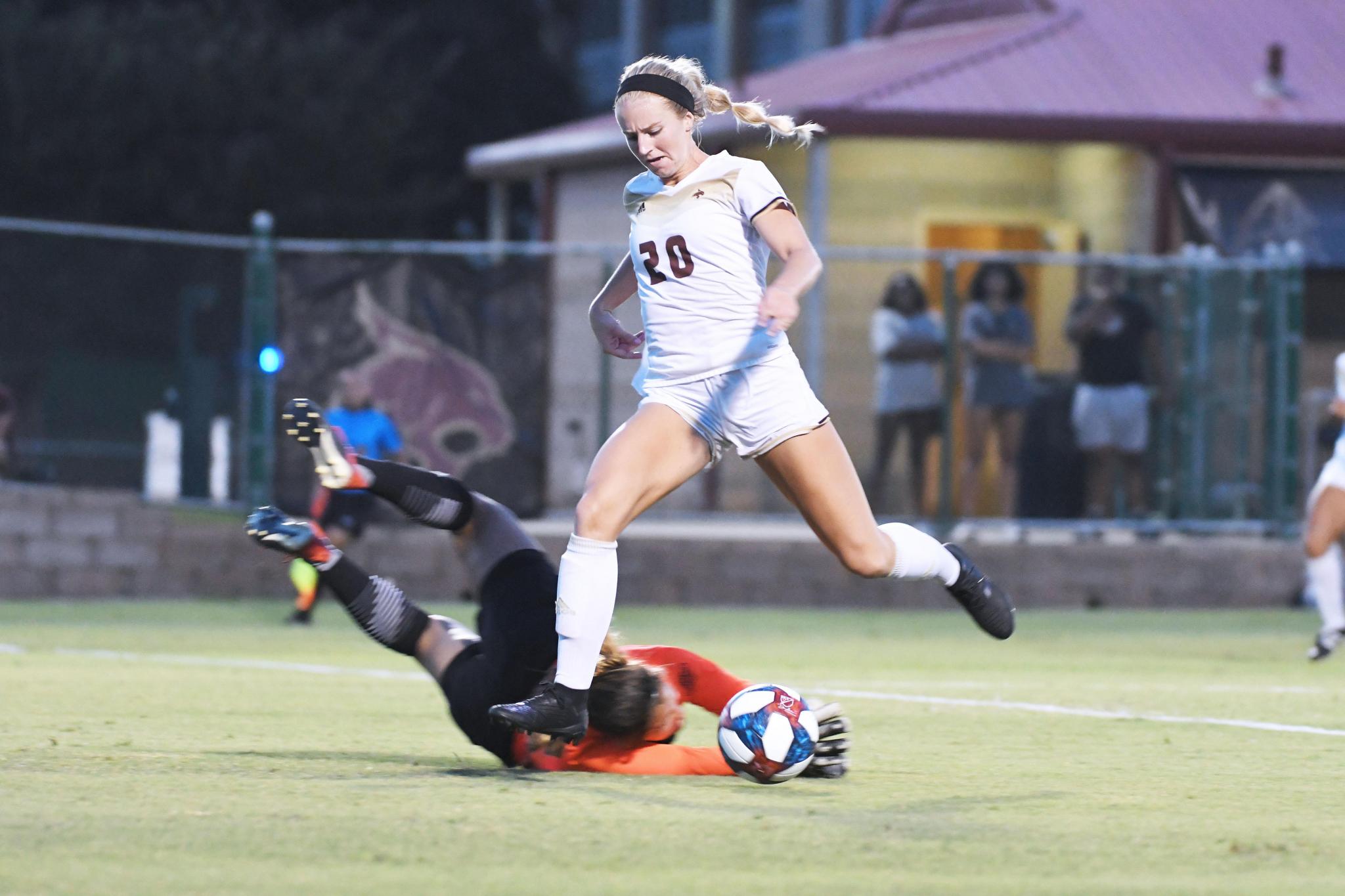 That includes the Bobcats’ shortcoming in the 2018 Sun Belt Championship on Nov. 4. Although Little Rock won the match on penalty kicks, 6-5, the game technically resulted in a 0-0 draw, keeping the maroon and gold’s streak alive.

The team opened the 2019 season with 1-0 wins over Incarnate Word on Friday and Prairie View A&M on Sunday inside Bobcat Soccer Complex to extend the run to 15. It’s currently the longest undefeated streak in program history and tied with UCLA for the longest active streak in the NCAA.

“I'll just take a win anytime. You know, a win is a win is a win,” head coach Kat Conner said. “I'm proud of the players. They actually come out with a lot of enthusiasm, a lot of energy, and I just think they're showing a lot of passion right now.”

Texas State made its debut a bit on the defensive as the Cardinals applied pressure up front. UIW held possession for most of the first half and took three corner kicks to the Bobcats’ one.

Texas State broke free late in the half, though. Senior defender Genesis Turman sent a throw-in to freshman midfielder Karlee Torisk, who scooted past her defender and zipped a cross into the box. The ball found freshman midfielder Bailey Peschel, who scored for her first collegiate goal 38:10 into the period.

“Karlee played me a great ball in and I just wanted to get it to the back of the net,” Peschel said. “I thought we played well as a team and everybody worked hard and fought as a unit and I think that's something special.”

The Bobcats had more chances to score later in the game, but struggled to finish them with just four of their 13 shots being on goal. The issue carried over into the next game against the Panthers, when Prairie View A&M sophomore goalkeeper Quinn Josiah came up with six saves.

The game-winning goal wasn’t even shot by Texas State. About eight minutes into the match, junior midfielder Renny Moore sent a corner kick into the box. The ball pinged around multiple players until it came to the feet of senior forward Kaylee Davis, who kicked the ball between a defender’s legs. The pass went under Josiah, who dove to save it, and another Panthers defender tried to boot it downfield. Turman deflected the clearance, though, and the ball flew into the goal for a score.

“I remember the ball coming from an awesome corner kick by Renny Moore, No. 8,” Turman said. “And then ricochet, ricochet, ricochet. And then Kaylee puts it back in and I'm there for Prairie View trying to get it out. And just being in the right place at right time, really.”

The team sat on the lead the rest of the way to take the 1-0 victory and claim a 2-0 record to begin the year. Conner said she’s still worried about her team’s finishing but is pleased to start off with two shutouts.

“I think defensively we're doing a lot of good things. I think the back line is really syncing up together. There's several different people that are in there,” Conner said. “And (senior goalkeepers Kathryn Budde) and Heather (Martin) are doing really well back there — and that's hard when you're not seeing a lot of shots and all of a sudden they get a quick counter on you. So to keep your mental focus in such a hot game like this, I think they're doing an awesome job back there.”

Texas State will face UTSA (1-0) on Friday at 7 p.m. in its first road game of the season in San Antonio.