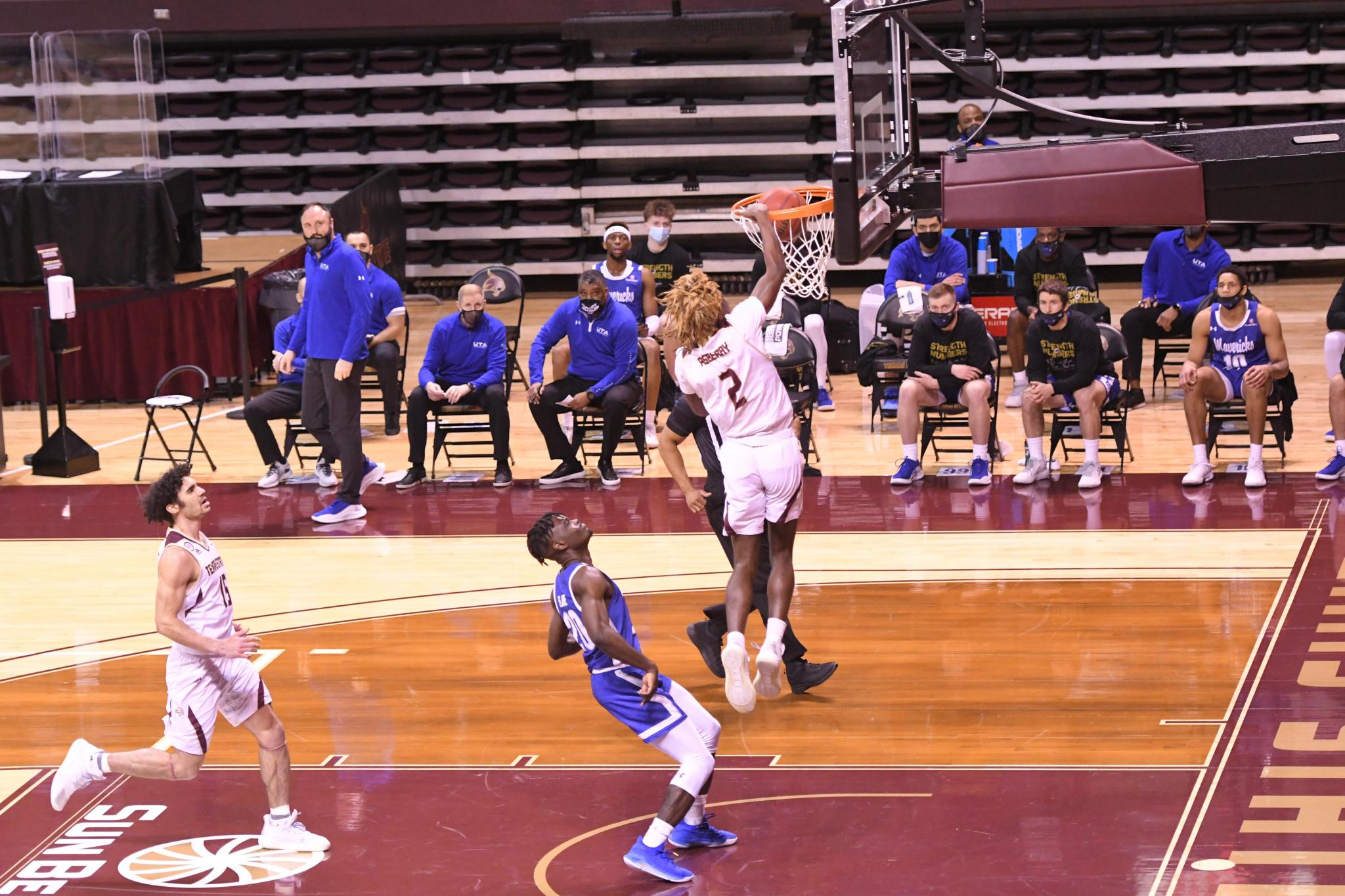 Interim head coach Terrence Johnson had to dig a little deeper into his bench than any other game this season.

Senior guard Shelby Adams injured his left shoulder while setting a screen Thursday in Texas State’s road win against UT Arlington. In the Bobcats and Mavericks’ rematch in San Marcos on Saturday, Adams had his arm in a sling and did not dress out for the game, joining redshirt senior guard Marlin Davis, who had missed the past two games, among the inactives.

Adams and Davis combine to average 57.6 minutes per game. Johnson turned to some of his younger players to fill in for the upperclassmen. Redshirt sophomore guard Addison Wallace received his first start of the season, taking Adams’ place in the lineup. Sophomore guard Drew Tennial got on the floor for the first time since Dec. 9. Freshman guard Dylan Dawson received the most minutes in any Sun Belt game he’s played this year.

The trio held their own, though, and helped deliver Texas State’s first season sweep of UT Arlington since the 2008-09 season with a 79-68 win inside Strahan Arena.

Some serious defense being played by Dylan Dawson, you can tell why #TXST likes him.

He hits another 3 on the play after this, he's up to a career-high 6 points today @smdrsports pic.twitter.com/Ue2S2lZgBH

The Mavericks (11-11, 7-7 Sun Belt) opened the game with a 6-2 lead. A 3-pointer from junior guard Caleb Asberry and a pair of free throws from senior forward Isiah Small put the Bobcats (15-6, 9-3) up by one and the team never trailed again. The hosts scored another eight unanswered points to make it a 13-0 run and give themselves a 15-6 advantage.

A pair of 3-pointer from Dawson boosted the lead to double digits at 23-12 midway through the half. Junior forward Nighael Ceaser scored on multiple second-chance opportunities and, along with Small, gave the maroon and gold a dominant plus-17 advantage on the boards during the game.

Texas State led 42-30 heading into halftime, then pulled ahead by 20 on a jumper from Small with 12:51 left in the game. UTA rallied late in the half, though, as an 8-0 run cut the deficit down to 66-58 with less than five minutes to play.

The visitors got even closer after Wallace fouled junior forward Jordan Phillips on a 3-pointer. Phillips made all three free throws to trim the hosts’ lead down to 70-63 with 2:22 on the clock. UTA pressed and forced a long pass down the sideline by junior guard Mason Harrell that Wallace couldn’t corral.

Phillips pulled up from outside again on the next play. The ball rimmed out but the Mavericks collected the offensive board and swung the ball to redshirt sophomore forward Patrick Mwamba open in the left corner. Mwamba’s shot also fell off the mark, but sophomore guard Nicolas Elame scooped up the miss to retain the possession for UTA.

Elame tried driving to the rim, but the ball bounced off his foot. He dove out of bounds to save it, but Tennial picked off his pass and the visitors were forced to play the foul game with less than two minutes remaining. The Bobcats shot 9-11 at the line down the stretch to finish with the 79-68 win.

Small registered his second double-double of the season with a team-leading 21 points and 10 rebounds to go along with two assists, two blocks and a steal. He was followed by Asberry with 20 points and Ceaser with 10 points and seven rebounds. Dawson scored a career-high nine points in 10 minutes off the bench.

Texas State will look to extend its winning streak to five when it hosts Arkansas State (10-9, 7-5) inside Strahan Arena on Tuesday at 6 p.m.