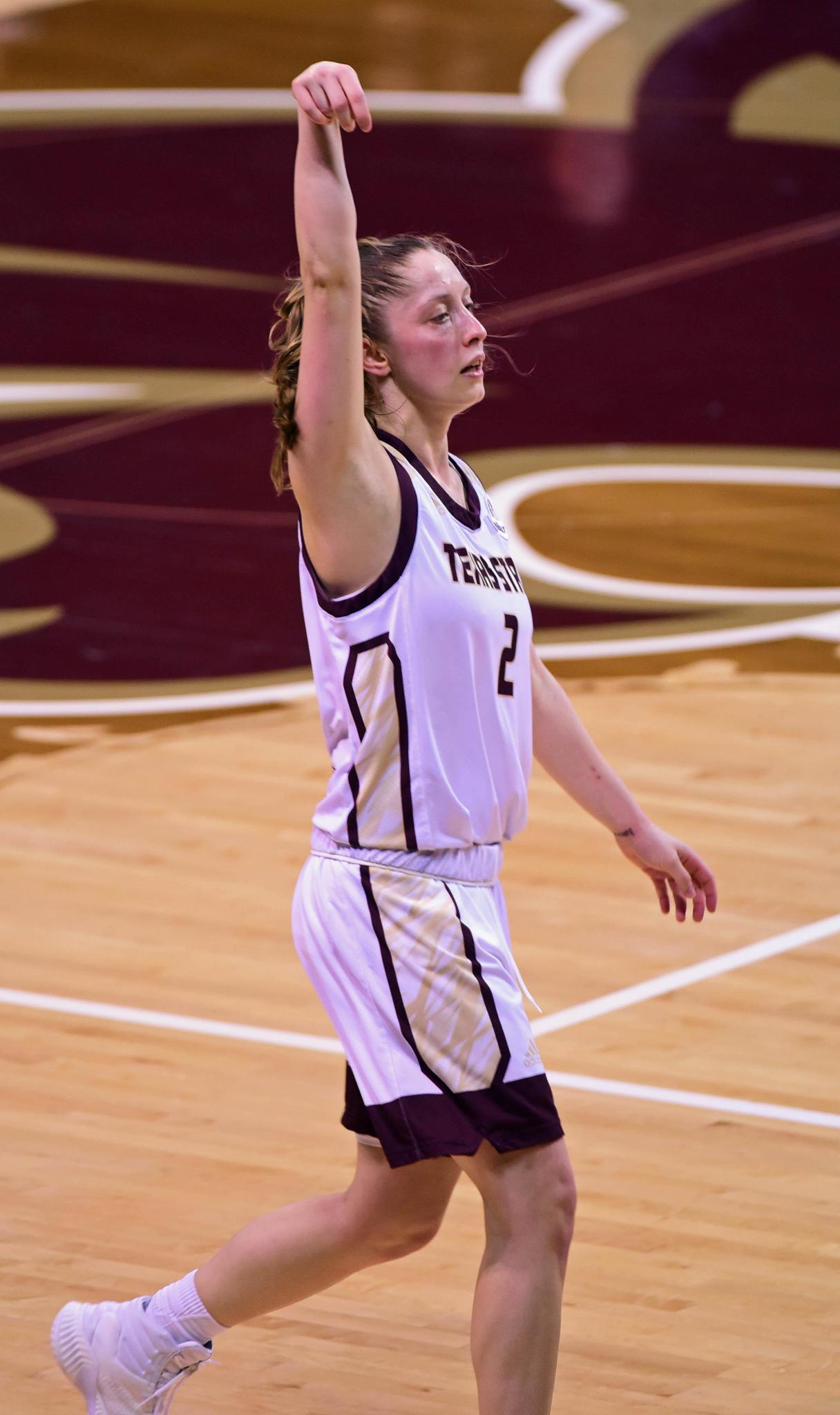 Texas State couldn’t get anything to fall in the third quarter against UT Arlington.

The Bobcats committed six turnovers during the period, and went scoreless the first six minutes of the half. Senior forward Zandra Emanuel snagged on offensive rebound after a missed 3-point attempt by freshman forward Da’Nasia Hood and found senior guard Toshua Leavitt wide open on the left wing. Leavitt drilled the trey, ending the scoring drought, but Texas State wouldn’t make another shot until the fourth.

The maroon and gold still held a four-point lead after shooting 1-10 from the field in the third, but the momentum had turned. The Mavericks rallied in the fourth quarter and won the last game of the regular season inside Strahan Arena on Saturday, 44-41.

“(UTA is) No. 1 in (point) differential and (we only lost by) three points,” head coach Zenarae Antoine said. “I think that’s the hardest thing about this game, is that, one, it’s the in-state rivalry, two, it’s the senior game and then three, they’re beatable. They’re a very beatable team.”

The hosts set the tone of the game on defense in the first half, holding the visitors to just 26 percent shooting. An and-1 jump shot and free throw from Leavitt gave the Bobcats an 11-9 at the end of the first quarter.

The visitors regained the lead four minutes into the second, up 17-16. Hood sank a triple on the next possession and blocked UTA redshirt senior guard Cierra Johnson on the other end. Texas State kept pushing.

Junior forward Jazza Johns made two baskets to push the lead to six. Junior guard Brooke Holle intercepted a post feed and cashed it in for a layup. During the team’s last possession of the half, Leavitt flared up from the corner, received a pass from sophomore guard Avionne Alexander and canned another shot from deep.

The Bobcats locked down the Mavericks on the other end, resulting in a 12-0 run in the final six minutes of the second quarter and a 28-17 lead at halftime.

“I think it was just our defense and we got some good stops and that just creates energy on offense,” Holle said. “So, our defensive was leading to good scores for us.”

The tough defense carried over into the third quarter. The offense did not, allowing the visitors to cut the lead down to four points.

Emanuel hit a pair of free throws in the first minute of the fourth to end the cold spell for Texas State. But UTA kept coming. The Mavericks tied the game at 36-36, then took the lead on a layup by Johnson.

The hosts hung in the game until the visitors committed a shot clock violation with 11 seconds left, leading 43-41. Antoine called timeout, hoping to draw up a play. But UTA tipped the inbounds pass. Hood reached the loose ball first, but travelled once she grabbed hold of it.

Texas State intentionally fouled and sent freshman guard Terryn Milton to the line. Milton made her first foul shot and missed the second. Her teammate, freshman forward Katie Ferrell grabbed the offensive rebound and the Mavericks ran down the rest of the clock to take the 44-41 victory.

“As talented as they are offensively, I think you saw tonight that we were able to make it tough on them to find those good looks,” Antoine said.

Leavitt paced the team with 16 points, followed by Johns with eight and Hood with seven. Hood also led the Bobcats with nine rebounds.

Saturday’s loss marked the final regular season game for Leavitt, Emanuel and senior guard Dabrasia Baty. But the upperclassmen’s college careers aren’t quite finished, as Texas State (14-16, 9-9 conference) will head to the Sun Belt tournament in New Orleans as the No. 6 seed. They'll take on the winner of No. 7 South Alabama and No. 10 Louisiana.

The team said they’ll be ready for whoever they face.

“It’s win or go home, so everyone has to give everything they have, whether they’re tired or not, on both ends of the floor,” Leavitt said. “Because it could possibly be your last game.”