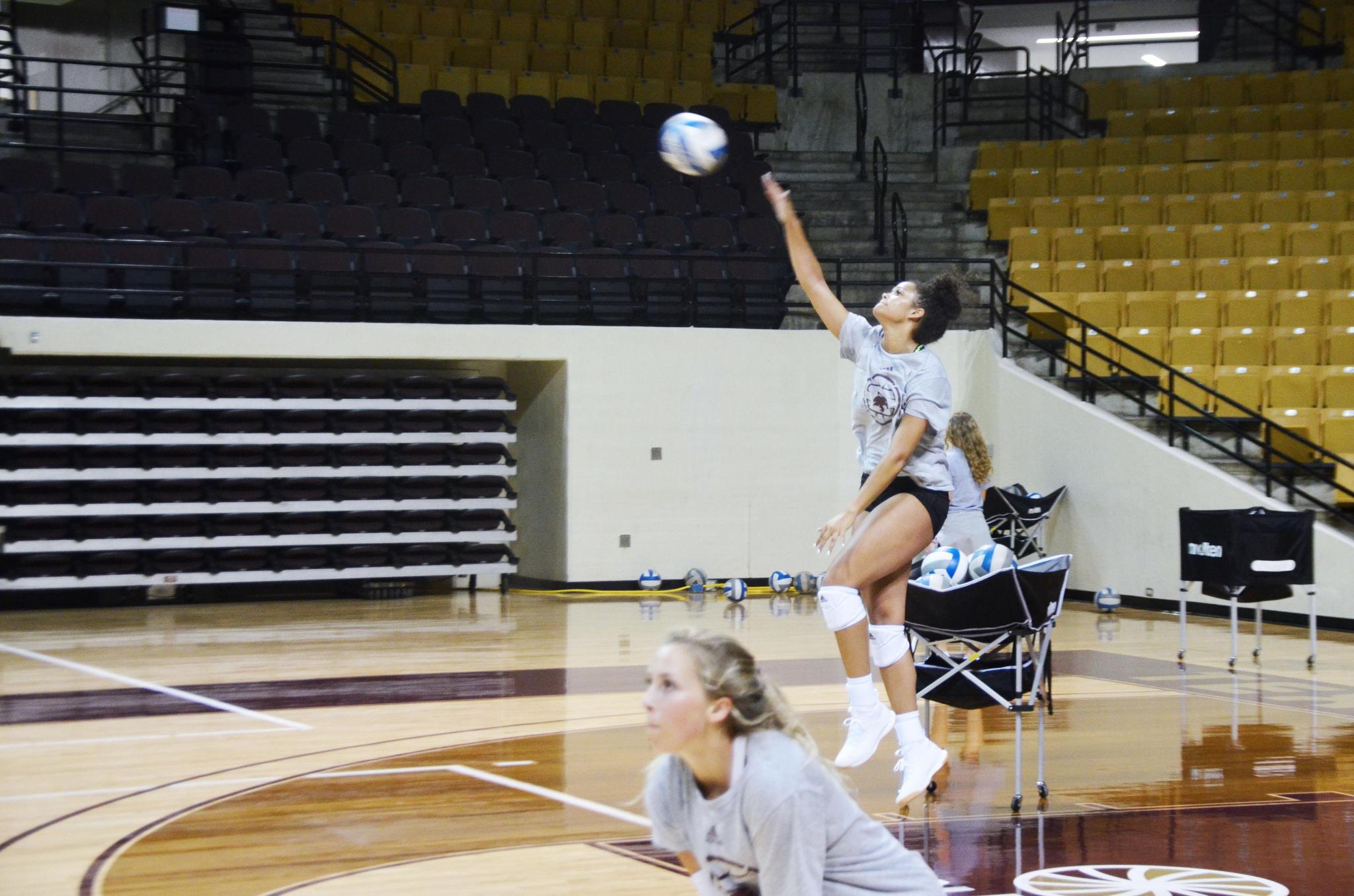 The Bobcats were the unanimous pick to win the West Division, with all 12 first-place votes. They also received the most points of any school in the conference with 72.

Chisum hated it. She tore it to shreds and threw it away.

“Everybody's gonna be gunning for us, you know? And they should. If we were in a different place, we'd be gunning for the (school) that's picked first,” Chisum said. “Yes, it's a lot of respect. A lot of it's from history and what we did last year, the carryover … We just gotta make sure that we take care of ourselves. Because every time someone comes in Strahan Arena, they're gunning for us. We're the team to beat in the conference.”

The team knows it, too. In 2018, Texas State lost one game in league play, secured the Sun Belt regular season and tournament championships and went two rounds deep in the NCAA tournament. This year’s roster includes four preseason all-conference selections, three of them sweeping the Sun Belt specialty awards.

Chisum worried her players wouldn’t be as motivated when they came to the first day of training camp on Monday. The opposite has been true. So far, the Bobcats break down each huddle chanting “Sweet 16.”

“For a mid-major school to get into the Sweet 16, especially from a school with as much history, I mean, it's our goal right now. Like, that's the ultimate thing,” senior libero Micah Dinwiddie said. “So that's just going to be in our minds until we get there.”

The head coach made it clear she didn’t add any pressure on the team to want to go further than they did last year. It’s completely been the players putting the pressure on themselves.

Still, the Bobcats had never been to the second round of the NCAA tournament before last season. How could one of the best teams in program history become even better?

Each training camp begins with Chisum’s “Mauler Test,” a series of 14 different exercises including weightlifting, running and jumping, that gauges who the fittest player on the team are. Players are scored 0-3 points based on how well they perform the exercise. For instance, in the mile run, players are awarded three points for finishing in under seven minutes, two points for finishing between 7:00-7:30 and one point for finishing in more than 7:30. No points are awarded unless you finish the mile.

“I actually had to do the two run tests together, it was probably one of the hardest things I've ever done in my life,” senior outside hitter Cheyenne Huskey said. “I would say the mile was the worst because this year, we ran it at about like 7:30 in the morning, and this week has been nothing but like 100 (degrees outside). So it was probably 90 degrees, humid, running four laps as fast as you can.”

Seniors are required to score 30 points to be considered a “mauler.” Juniors need 28, sophomores need 26 and freshmen need 24. Maulers receive a T-shirt to commemorate their accomplishment. Chisum said there’s typically seven or eight players that pass the Mauler Test. She was disappointed when only five players passed last year. The team was determined to do better.

This year, 14 of the 19 Bobcats on the roster are maulers, “by far” the most of any of Chisum’s teams. Dinwiddie scored 31 points. Huskey scored 36. Junior setter Brooke Johnson led the team with 46 — 18 more than she needed as a junior.

“And I will tell you — this isn't excuses — two of them weren't able to do all of the test because of some kind of a physical limitation, whether it's a blister on the foot, whatever it is,” Chisum said. “So, yeah, I'm very pleased.”

The test gave the team the confidence boost it needed to consider themselves a Round of 16 contender. Chisum said the players used to be a bit frightened against some of the top-ranked schools on their schedule. Their goal used to be to just win one set.

Now, their goal is to win three.

“What we didn't do last year that we're trying to do this year is win against the top-25 ranked school,” Dinwiddie said. “Because we know we can, we know we're at that level. So I think that's my biggest goal for the team.”

The Bobcats don’t want to get too ahead of themselves. Their non-conference schedule is loaded with tough teams. They’ll open the 2019 season with a doubleheader inside Strahan Arena on Aug. 30 against Liberty at noon and USC — who was ranked No. 14 in the AVCA Coaches Poll on Tuesday — at 7 p.m.

But with 14 maulers, Texas State's ready to see what it can do.

“I would just say (I’m excited for) everything,” Huskey said. “My big goal this year is to take everything in, be in the present. Because this is (my) last year. So we don't have that many months to play anymore until it's over. So (I'm) just looking and being in the present.”