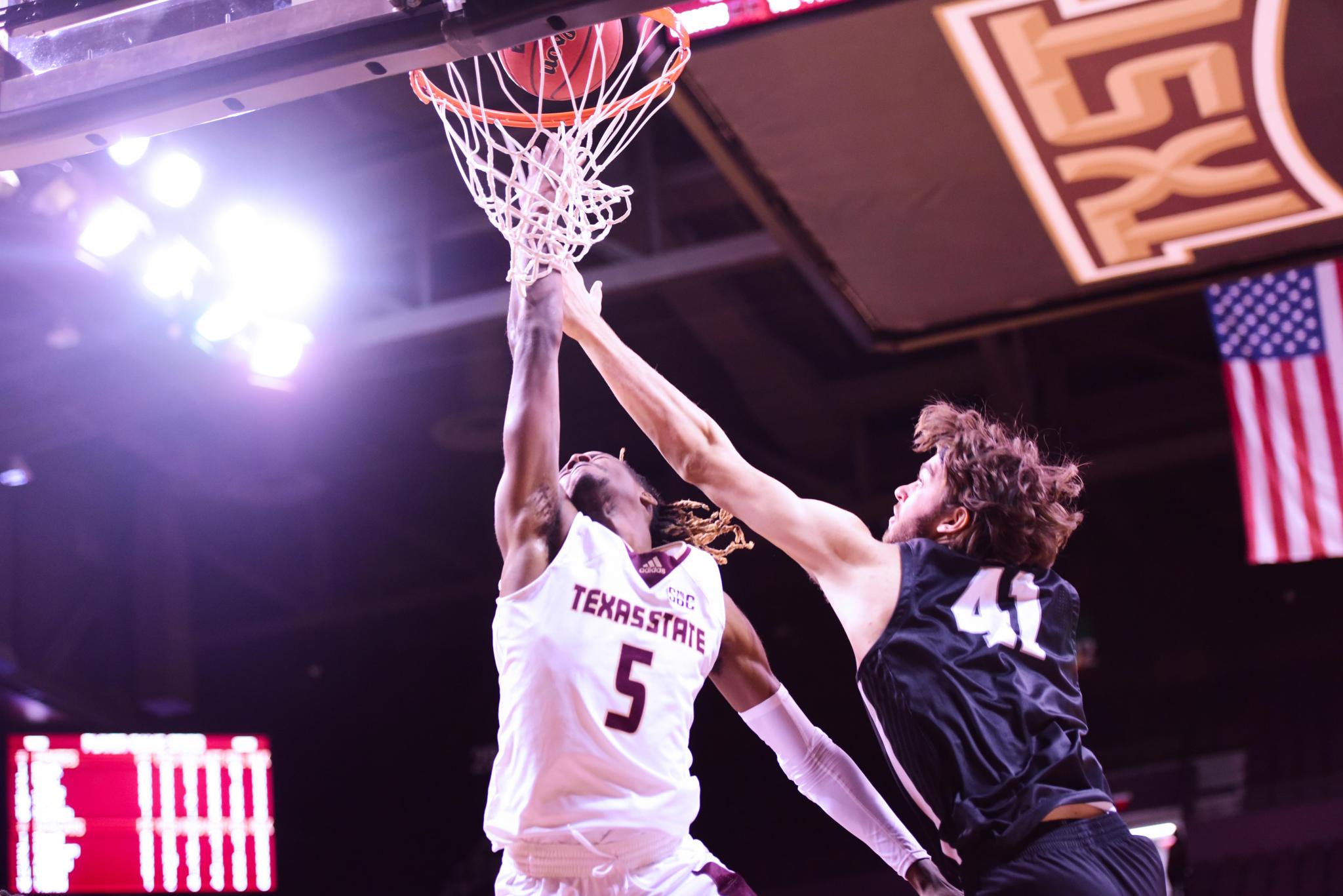 Bobcats find their rhythm in 101-54 victory over Southwestern

On Dec. 12, 2020, Texas State suffered one of its more embarrassing losses in recent memory.

The Bobcats hosted Our Lady of the Lake, an NAIA opponent that was supposed to be a relatively easy win. It looked to be that way at first, as the maroon and gold built up a 30-20 lead with just under three minutes to play in the first half.

But the Saints closed out on an 11-0 run, taking a 31-30 into halftime. Texas State built up a double-digit lead again midway through the second half. It got sliced down by the 3:12 mark and OLLU came away with a 61-58 victory — the only win of the Saints’ 2020-21 season in which they played five games.

The Bobcats shot just 34.8% from the field, including 18.2% on 3-pointers, and made just 8-of-16 free throws. The loss dropped them to 3-3 on the season. It was a wake-up call. For a team that was still learning how to play without the program’s all-time leading scorer, Nijal Pearson.

“There’s certain things I want (the players) to have a short memory on. Maybe a turnover or a missed blockout you can have a short memory on. But the Our Lady of the Lake (loss) hopefully stays with them for 25 years,” head coach Terrence Johnson said. “You understand how important that is every time you get a chance to play a non-Division I team, understanding that you’re their biggest opponent at that time. You know, so the most important game is the game that you’re currently playing the next game on your schedule. So we certainly didn’t want to relive that.”

Texas State faced another non-D1 inside Strahan Arena on Dec. 12, 2021. The Bobcats took care of business this time, handing Southwestern a 101-54 defeat.

“​Last year, we wasn’t really as close as we’re supposed to be,” fifth-year senior forward Isiah Small said. “But that game right there made us all come together instead of breaking us apart. So really, a lot of team bonding and team chemistry, it helped us a whole lot beginning this season.​”

Johnson said he has three main goals for the Bobcats each game: hold the other team 39% shooting or less, commit 11 or fewer turnovers and win the rebounding battle. Johnson said that while Texas State has only lost one time since he took over when they do two out of the three, the win over the Pirates was the first time the maroon and gold hit all of them.

The team still needs a reminder every now and then. At practice on Wednesday, the players had a shooting competition in which they broke off into two teams, ran out to a spot to shoot — first the left corner, then the right, then the top of the key. The first team to make 20 shots at each spot won the round. The team that lost two rounds had to run.

“We’re missing too many open shots,” the head coach said.

The Bobcats (7-2) will look to build on their six-game winning streak on Wednesday when they host Lamar (2-8) at 7 p.m.

“I’m proud of the effort from everybody, I’m glad that everybody pretty much got a chance to play,” Johnson said. “And I’m glad that whoever didn’t play as much was engaged in the game, be it early or late. So I was happy that we had a chance to just put on a good show in front of fans.