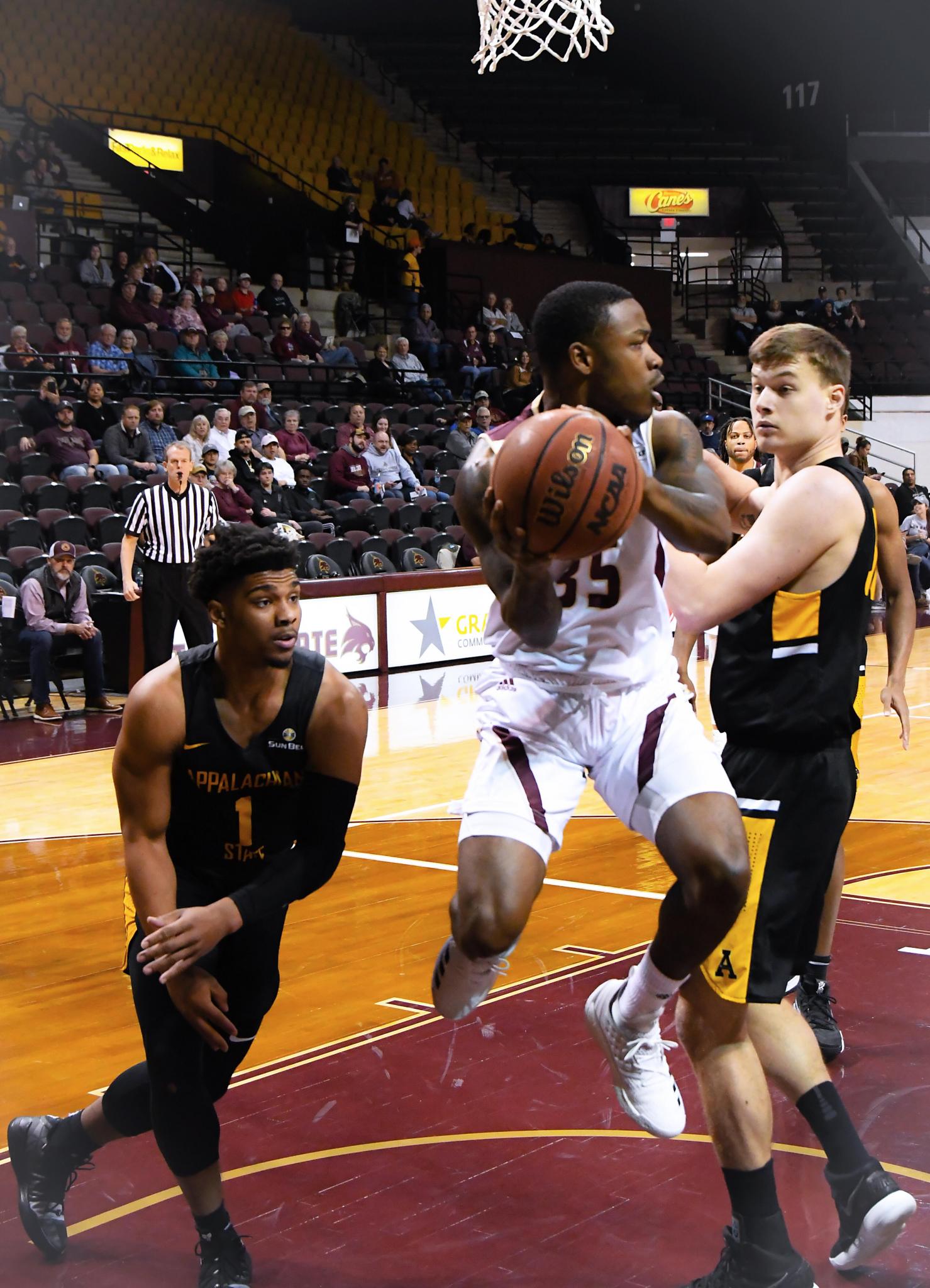 Texas State feels a growing sense of urgency with seven games remaining in the regular season.

The Bobcats (19-5, 8-3 Sun Belt) are in prime position to win the conference, or at the least secure a semifinal-bye in the league tournament.

As Texas State prepares for a road trip in Arkansas, the team knows winning in the Sun Belt isn’t easy. Thirty-three of the 66 games played in the conference have been decided by six points or less.

“We know every team in this conference is capable,” senior forward Alex Peacock said. “I know App State is near the bottom but they’re a really good team and they’re capable of beating anybody on any kind of night. So, we just know that we can’t take anybody for granted. So, I mean, that’s how it is.”

The Bobcats begin their Arkansas swing against Arkansas State (10-14, 4-7) on Thursday at 7 p.m. inside First National Bank Arena in Jonesboro, Ark. Texas State then takes on Little Rock (9-15, 4-7) on Saturday at Jack Stephens Center.

The Bobcats defeated both teams earlier this season in San Marcos — Little Rock on Jan. 17, 80-62, and Arkansas State on Jan. 19, 77-64. But Texas State doesn’t want to overlook either team.

“You start looking too far ahead, you lose sight of what’s right in front of you,” Peacock said. “That’s really what it is. We’ve kind of talked about it before every game, you’ve got to take it one game at a time. Every practice at a time. Just keep grinding it out and grinding it out to get to your long-term goal.”

Arkansas State will provide a different challenge. The Red Wolves have changed both their starting forwards since their last matchup against the Bobcats. Senior Tristin Walley and redshirt junior forward Shaquillo Fritz are now starting for Arkansas State. Walley averages 7.7 points and 5.3 round per game, while Fritz only averages 1.2 points and 1.6 rebounds per game.

Texas State will once again be challenged by senior guard Ty Cockfield, who is the fourth leading scorer in the Sun Belt with 21.1 points per game. The Bobcats will also have to contend with sophomore guard Marquis Eaton, who scores 11.7 points per game.

“I think Arkansas State is the best offensive rebounding team in the league,” head coach Danny Kaspar said. “They’ve got one of the best scoring-guard duos in Eaton and of course Cockfield … I think offensively there are some weapons there that not a lot of other teams have at four different spots. So, we can’t give them second shots and we’ve got to handle their press. They’re probably going to press more than most teams.”

Last time Texas State went on the road, it split its two games against Georgia State and Georgia Southern. The Bobcats know how important it would be to win both games.

“This is a step for us to see if we’re prepared to win two games on the road back to back,” junior guard Jaylen Shead said. “It also translates to, say, the conference tournament when you’ve got to go on a neutral court and win two to three game in a row, I think this is, every game is important, so the next one, you’ve got to go get it.”

A win over Arkansas State would give Texas State 20 wins this season, which would be Kaspar’s first time with the Bobcats to win 20 games in the regular season.

But a sweep against the Arkansas schools would keep the Bobcats where they want to be as the season winds down.

“The closer we get to the end, the more we have a bullseye on our back,” Kaspar said. “As you approach the end of the year and you’re in first place, or tied for first place I should say, the sense of urgency becomes greater. You just hope that the players don’t lose focus of what’s there to be had, what’s in front of them. So, I pray every night we stay healthy and focused.”