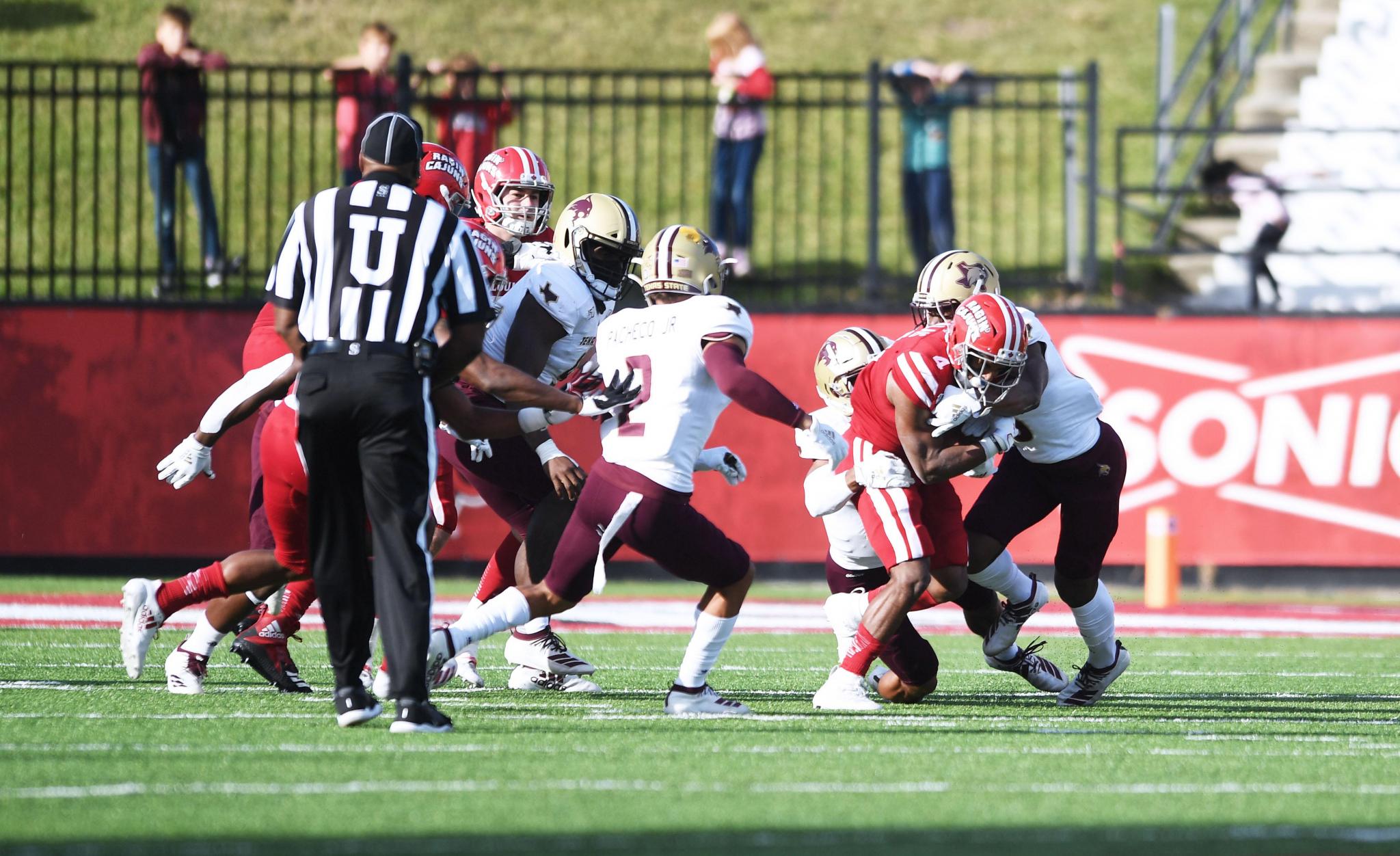 Bobcats return to San Marcos for homecoming against Jaguars

The Bobcats are happy to be back home.

It’s been over three weeks since Texas State played at Bobcat Stadium, and even longer since the team took to Jim Wacker Field on a Saturday. The time away has been rough on the maroon and gold, currently on a three-game losing streak.

But with a home game on the schedule this week, head coach Jake Spavital believes the team can begin to turn things around.

“I think our kids are more fired up than I am,” head coach Jake Spavital said. “It was kind of just a unique October in terms of off weeks and travel and Thursday night games and playing on the road ... The last Saturday we played here was September 28. But I think we’re excited to get out there. You know, homecoming game, let’s get back on track. I think these kids really enjoy playing at Bobcat Stadium.”

Texas State draws South Alabama as its opponent, the No. 10 offense and No. 6 defense in the Sun Belt. The Bobcats fell to the Jaguars in a close game last year in Foley, Alabama, losing 41-31 on Sept. 28, 2018.

The loss has stuck with the players from last season’s roster.

“When we played them last year, we started out real strong and then like towards the end, we had kind of fell off,” sophomore cornerback Jarron Morris said. “But that’s why this year — we know what we did last year, so we not gonna try to do that again. We’re gonna try to finish all four quarters and step on the gas.”

South Alabama has cycled through three quarterbacks this season, each of them running the offense with a different style. Defensive coordinator Zac Spavital said Texas State will need to be prepared for all three, as well as shut down the visitors’ run-first option scheme.

“They’ve got a couple really good athletes that can provide their run threat with the quarterback and then they’ve got a couple throwers,” Zac said. “So, you know, the emphasis is focusing on the option, making sure we’re sound with that and got all the responsibilities taken care of.”

Offensive coordinator Bob Stitt said establishing the line of scrimmage will be vital for the Bobcats. The maroon and gold are averaging 77 rushing yards per game over the past three games. Junior running back and leading rusher Caleb Twyford exited the past two games early with injuries and Jake Spavital doubted the tailback would play this week.

Junior quarterback Gresch Jensen is still in concussion protocol. Sophomore Tyler Vitt is slated to start behind center for the third consecutive week. Jake Spavital said Vitt’s been getting more reps in practice and is started to look more comfortable in practice this week.

“We’re giving (Vitt) a little bit of free rein to do some things and he’s handling it well. So I’m excited about that. He did a nice job in the first half with it last week and we need a full game of it and just put the ball where it needs to go,” Stitt said. “We’ve got to do a good job up front because (the Jaguars) are very, very good and they’re big. And if we can handle the line of scrimmage, I think we can have some success with the things that we’ve got planned for them.”

Texas State (2-6, 1-3 conference) hosts South Alabama (1-7, 0-4) inside Bobcat Stadium on Saturday at 2 p.m. Jake Spavital said the message to the team has been clear this week.

“We’re going to put our 11 guys out there versus their 11 guys we got to go fight,” the head coach said. “I talked about, ‘How are we going to respond?’ We got four games left and we gotta be able to have some answers and we gotta go out there on homecoming and compete.”